When competing for attention with nearby white sand beaches, incredible snorkeling, sea turtles, whale sharks and teeny tiny tarsiers, a city stop in the Visayas naturally has things pretty tough. After skipping straight through the 17-city sprawl of Metro Manila and not being that impressed with traffic congested Cebu City, Dumaguete was a nice change of pace. 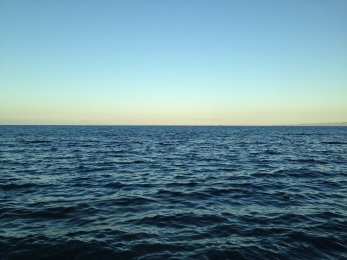 This seaside university town was well connected as a base for visiting Apo Island, arriving from Tagbilaran port on Bohol by OceanJet fast ferry, and leaving for Cebu via  Lilo-an port further around the coast. It was well stocked with coffee shops, bakeries and restaurants… although completely out of stock for the one thing we really needed; a replacement GoPro case.

Despite the crowd of tricycle drivers at the port exit insisting that where we were going was “very, very far“, we decided to chance it – seeing as they didn’t actually know where we were going, and we could just about see the turning for our road further down the seafront promenade. We snailed up, and 15 minutes later were checked in and heading back out to explore. There’s no beach in Dumaguete, but the promenade was still worth an evening stroll. Children played, buskers busked, masseuses set up shop in the old rotary club bandstand, and groups of young men happily allowed themselves to be distracted from fixing their bangka boats by a bottles of local rum. It’s cheap, but pretty drinkable when added to a fresh coconut. 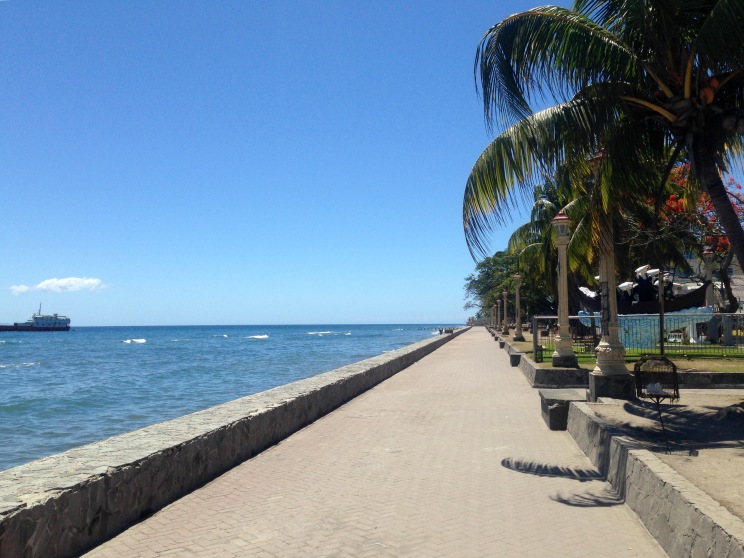 As Dumaguete was essentially a Visayas pit-stop for us, our time between catching ferries and bangkas mainly revolved around food. Cafe Mamia turned out to be a good bet for affordable coffee, while Sans Rival boasted the best cake selection. For dinner, La Dolce Vita was our favourite, with diner-style boulevard-front seats and a kind of Filipino-Latino fusion menu. The main road is two blocks behind the seafront, and was where we headed for cheap bakeries and fruit shops. Chains of bakeries are a big deal in the Philippines; pastries come with Spanish-sounding names, and Asian flavours like pandan and bean curd (all too often masquerading as chocolate), but all of them could have done with another half hour in the oven. Instead of crispy rolls or flaky pastries, everything had a half-baked doughy stodge to it.

After disappointment at Bread Talk, Bread Stories and Bread Life, we’d decided to go our separate ways from Filipino baking until, on the 5:30am walk through the university campus to Harold’s Dive Shop for our trip to Apo Island to swim with sea turtles, our faith was restored. The smell of freshly baked bread drifted over from a small green hut, the baker was leaning out of the window, and happy to sell us (fully baked!) pandesal rolls straight from the oven for 2 pesos each. Pandesal as in ‘pan de sal‘, showing another lasting Spanish influence on the language.

After turtle times at Apo Island, our next stop was swimming with the slightly more imposing prospect of whale sharks. Although this is advertised as being in Oslob, it’s actually quite a bit further south on Cebu island at Tan-Awan. From Dumaguete we took a 30 minute tricycle to Lilio-an port and a 15 minute ferry to Santander on Cebu island. On the other side we were reminded once again that, nice as Dumaguete had been, the best of the Philippines is its incredible natural beauty. We passed secluded beaches, headed through the sleepy town of Santander, and down a path lined with banana trees in search of our small bungalow.