We had two main ambitions for our first stop in the Philippines; palm-sized primates and chocolate coloured hills. These are the two biggest draws to Bohol island and could be seen in a day trip, but in the Philippines you’re never far from a stunning stretch of coastline, so we decided to sandwich the sightseeing between a couple of days’ of beach time.

We stayed on Alona Beach on Panglao, a smaller island connected to Bohol by bridge. It had the white sand beach we were after, but just not that much of it at high tide. There seemed to be a lot of places jostling for space along the sand, yet once we’d discounted the jewellery shops, tattoo parlours and dive shops, there wasn’t a huge choice of food. Barbecue stalls served freshly grilled meat and seafood skewers at tables right on the beach, Buzz Cafe’s upstairs restaurant had the best view out over the bangka boats bobbing in the sea (but pizza and pasta rather than Filipino food). For local food we went to Payan on the road behind the beach, where the sisig (ground spicy pork and rice) was cheap and tasty.

There are no end of package trips on offer for a full day tour of Bohol’s top sights. They pack a lot in; visits to Spanish colonial churches, a manmade mahogany forest, an all-you-can-eat buffet lunch on a Loboc river cruise, the tarsier sanctuary and the Chocolate Hills. Hiring a driver for half a day ended up being cheaper and meant we could head straight for the two star attractions.

First up were the critically endangered tarsiers; part cutie, part total weirdo. These palm-sized carnivorous critters are the smallest primates in the world and are now only found in a small number of Philippine islands, as well as Sulawesi. They have long spindly fingers and toes, and, taking up most of their head, huge goggling eyes that they can’t move, but make up for by being able to rotate their head 180 degrees! 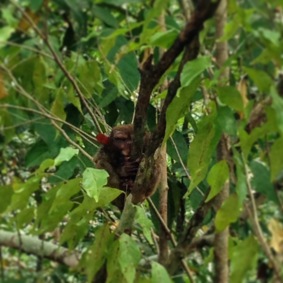 There are two tarsier sanctuaries in Bohol having some success restoring populations, one in Loboc and one in Corella (each with a 60 pesos entry fee), where they live in semi-wild conditions; there’s a defined space managed by the sanctuary, but there’s nothing stopping the tarsiers coming and going as they please. There are other places on the island to see them, but they’re kept in captivity. This is harmful for tarsiers, which at best don’t breed in captivity, and at worst are reported to starve to death.

As tarsiers are nocturnal, the sanctuaries close at 5pm to give them space from gawping humans to play and leap around among the branches. The staff then note which branches the tarsiers choose as their sleeping spot for the day and station themselves at these trees to point them out to visitors. We had to creep around the sanctuary in complete silence and were lucky enough to spot five; some snoozing clinging onto branches with a happy little grin on their face, others briefly opening their saucer-eyes to goggle out at us from under a canopy of leaves.

The Chocolate Hills are completely unique to Bohol, but, spoiler alert, are not made of chocolate. Within a 500sq metre area there are over 1,700 completely uniform 50m high conical hills. They look like the hills from Super Mario! They get their name from the brown colour they turn during dry season, but at any time of year they stand out in stark contrast to the lush dark green valleys surrounding them. 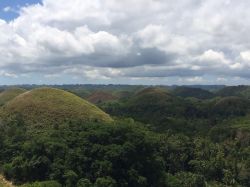 We paid 50 pesos each to get up to the viewing platform but, to be honest, it’s not worth it. The platform was damaged by the 2013 typhoon Yolanda so the usable part is pretty cramped. The hills are in the distance so you don’t get a feel for just how many there are. A much better view is actually from the car park at the bottom and the road winding away from the viewing platform hill, or on an ATV ride around some of the hills. Of course we only figured this out after having powered up and down the 200 steps to the platform… 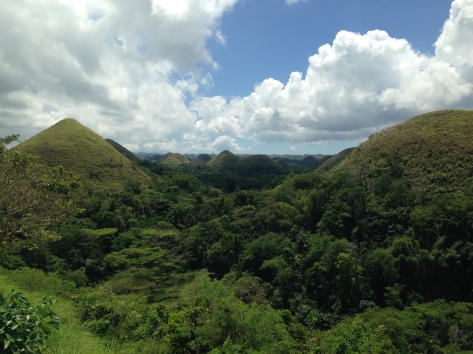 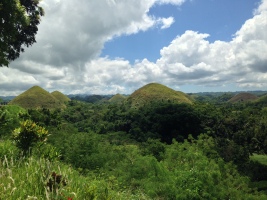 Geologists don’t currently agree on how the hills were formed (the most widely accepted theory is that it’s a combination of uplift of coral deposits, and the effects of rainwater and erosion). So it’s neck and neck between science and local legend to be proven right. Our money’s on the ‘rubble from a boulder fight between two giants’ theory.

The drive back from the Chocolate Hills ended up passing most of the places from the day trip itinerary, and our driver, Bryan, was happy to stop for photos and give us the back-stories. We drove past the three oldest colonial churches, two still undergoing repairs from typhoon damage, and the concrete shells of a couple of houses that were completely destroyed. We’d read blogs about the teeth-chatteringly bumpy drives inland, but for the most part the roads have now been repaired. There were only a couple of stretches of “free massage” roads, as Bryan called them, near where some bridges were being rebuilt.

We also drove through the impressively tall trees and thick sprawling roots of the manmade mahogany forest. It was planted in the 1950s in a landslide-prone area to help with irrigation. Further towards the coast we stopped at Loboc where the river was a bright emerald green. We sat at the edge watching some kids play near the bank, and also spotted the buffet cruise boats included in the day trips. These looked like floating tourist traps so we were glad to have skipped that in favour of fruit from a market stall for our lunch. 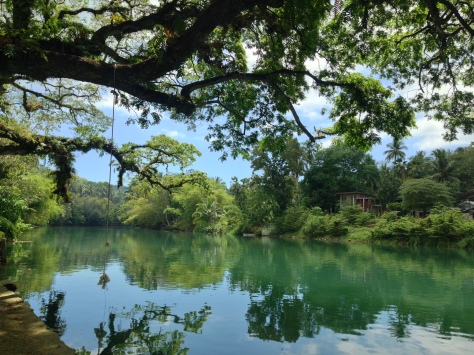 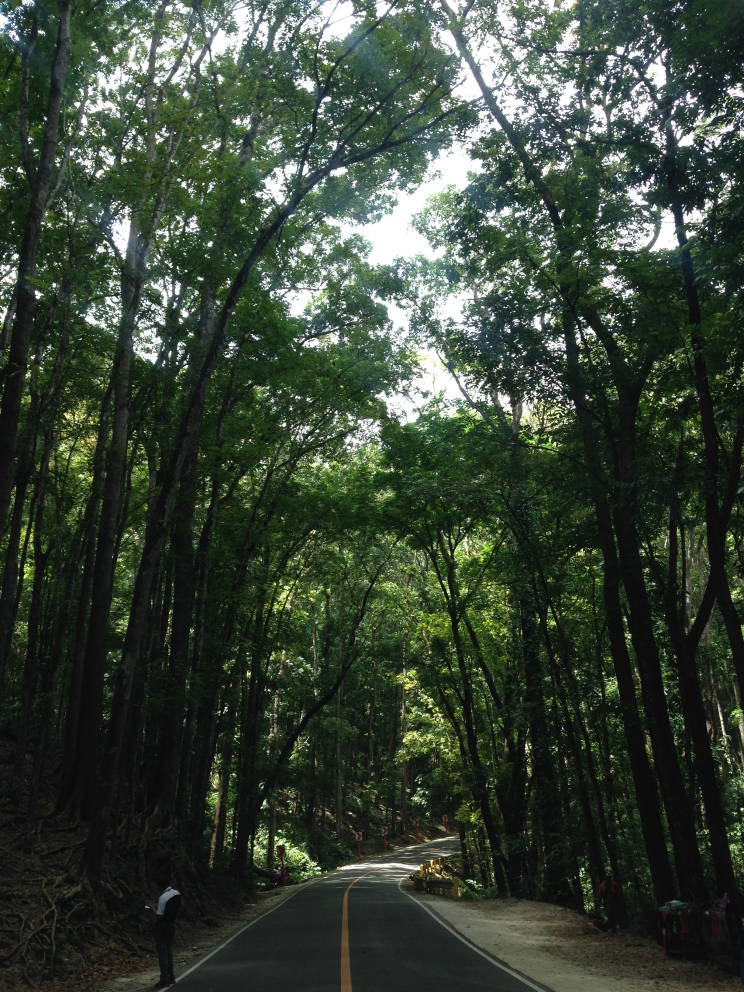 Not being blown away by Alona Beach, we took Bryan’s advice and negotiated a 90 peso tricycle ride further around the coast to Dumaluan beach the next day. There’s a 25 peso entry fee, but it’s much less crowded than Alona beach. There are a few bamboo picnic huts available to hire and one small grill shack and cafe. From the beach, Timian swam out about 30m where the seabed was covered with coral, sea anemones, and teeming with beautifully coloured angel fish, birthday-cake looking starfish, and, best of all, he found Nemo hiding in the sea anemones! 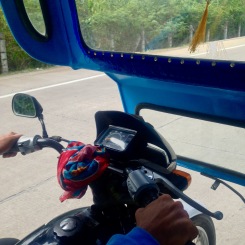 Dumaluan is close to a couple of expensive beach clubs and resorts that offer day passes, but we went with Bryan’s tip as it was twenty times cheaper than the 500 peso entry fee at Bohol Beach Club next door. After walking along Dumaluan beach we came across a neat row of picnic tables, a neat row of sun loungers and a neat row of towering palm trees with a photogenic line of white rope hammocks strung between them.

Just as we were thinking this was definitely the better end of Dumaluan, we realised we’d accidentally wandered into Bohol Beach Club’s stretch of sand. Clearly, we turned straight back to Dumaluan and did not claim a lounger or commandeer a hammock. And Timian certainly didn’t climb their palm trees. But, theoretically, nobody would notice or mind if you did… 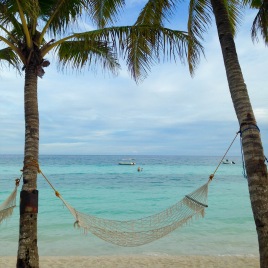