The theory goes that you’re never more than six introductions away from anybody else on the planet. We met Rothana, born and bred Phnom Penher, in just four: the son-in-law of the cousin of the mother-in-law of Rebecca’s colleague Alan.

Having found it harder to get beyond the tourist bubble and under the skin of local culture than in other Asian countries, we jumped at Rothana’s offer to take a day off work and show us around his city. Granted, we had spent our first 10 days in Cambodia being beach bums along the south coast (and river bums in Kampot – if that’s not a thing, it definitely should be), but even in the capital, local cultural identity wasn’t as clearly stamped as in Bangkok or Hanoi (let alone Delhi), with much more separation between a tourist or ex-pat’s lifestyle and a local’s lifestyle. In fact, when we met Rothana on the first night and asked for Khmer food recommendations, he drew a blank and suggested we’d be best off staying in the ‘Western areas’ until we were with him the next day.

As Phnom Penh continues to rebuild itself from the Khmer Rouge times that tore it apart, foreign investment and influence is noticeable everywhere. Driving through the expanding suburbs of the city we saw row after row of billboards advertising Chinese-owned shopping malls, Japanese-owned apartment buildings and huge plots of ‘foreign ownership eligible’ land along the highway. Even day to day, all prices are in U.S. Dollars; we were only given Riel as change for less than $1, and only saw prices listed in Riel when we bought fruit at a local market, or ate at roadside food stalls.

We’d been warned about the crazy traffic in Phnom Penh. Expecting the manic hustle we’d battled on the streets of Jaipur or Hanoi, it was a surprise to find the streets choked with Range Rovers and Lexus (Lexi?). There were still mopeds and bikes zipping around, with only a casual nod to any road rules, but having cars the size of tanks rolling through the narrow streets definitely slowed everything down.The best place to begin a day of sightseeing in Phnom Penh is where the city itself began, Wat Phnom. Supposedly the city got its name when a woman named Penh found four Buddha statues floating down the Tonle Sap river. The Wat Phnom temple was built on a nearby hill (‘phnom’) to house these statues, the city spreading outwards from the hill over the years. 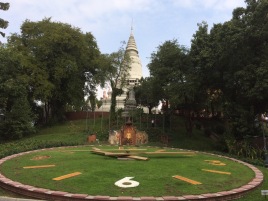 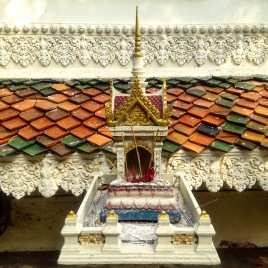 It turned out to be a pretty statue-heavy morning. Next up was the National Museum, by the Royal Palace. The museum mainly exhibits statues recovered from ancient Angkor temples and shows the unique mix of Hindu and Buddhist beliefs in Cambodia. 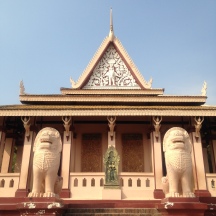 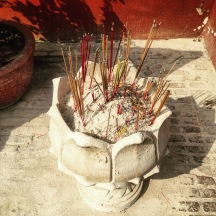 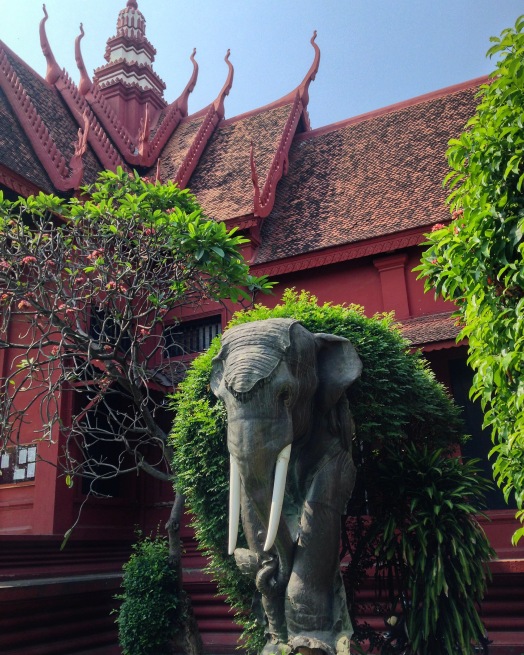 One reason it’s hard to get to know everyday Khmer culture could be because of the big difference in wealth between locals and tourists, but it also sometimes felt like a self consciousness about flaunting local traditions, let alone wanting to market them to tourists. We got just a sense of the destruction that Cambodia, it’s people and their culture, had been through when we visited the Tuol Sleng S-21 genocide museum. The former school, turned torture center, imprisoned more than 17,000 people during the Khmer Rouge times. 7 survived. It now depicts the period when over 2 million people (25% of the population) were murdered by Pol Pot’s regime. It was extremely difficult to take in, and impossible to put into words when asked by Rothana, who’s life like every Cambodian has been affected by the atrocities, how the visit had made us feel.Most tuk tuk drivers will offer a set price to take you to S-21 and on to the Choeung Ek Killing Fields 8km outside the city. As we were with someone whose parents had lived through the period it didn’t feel right dwelling too much on that side of the city’s history, so we decided against driving out there as well.

We’d tried amok, cha traop dotty and lok lak elsewhere in Cambodia so were keen to see what else is on a Khmer menu. Be careful what you wish for. Frog and rat anyone? Despite Rothana protesting that rat tastes just like chicken, chicken tastes even more like chicken and our kro ao chhouk (chicken and lotus) curry was delicious.

Phnom Penh is by far the biggest city in the country, with 1.5 million people and counting (the next biggest is about 1/10 of the size). The growing pains were most visible from the Eclipse rooftop bar on top of the Phnom Penh Tower.

Dotted all across the skyline were half-built highrises covered in green netting and scaffolding, frozen halfway through their construction. Rothana explained that his friend had invested in a flat over 10 years ago, and was still waiting for work to resume. For all the signs that money is coming into the country, there is a recognition that most of the money stays in the hands of just a few (i.e. those behind the blacked-out Range Rover windows) and doesn’t reach the local people. We came across this in several passing conversations, though few are willing to come out and say it publicly.

Phnom Penh wasn’t the most beautiful city, and far from our favourite in Cambodia. Nevertheless, the capital is definitely the place to understand the country, it’s history, and it’s people. We ended our last day in Phnom Penh with a dusk boat trip along the Mekong River watching the lights of the newer parts of the city, and the Royal Palace, start to light up the riverside.

We left on our second Giant Ibis bus, excited to be transported even further back in time to the peak of the Khmer empire and the temples in its capital, Angkor.