The first thing to learn in Hanoi is how to get around. It’s not that there’s a complicated public transport system (there isn’t one), just that walking takes a bit of practice. Once you’ve sussed it, it’s very walkable. Well, for a city of 9 million people.

We stayed in the Old Quarter, so it was an in-at-the-deep-end introduction. Pavements are used as overflow for shop displays, parking spots for scooters, colonised by people eating at the street food and bia hoi stalls, games of street-badminton, or even wedding venues. Outside the city centre we saw several multicoloured matrimonial marquees squeezed between buildings and the kerb, guests dodging speeding mopeds as they arrived. 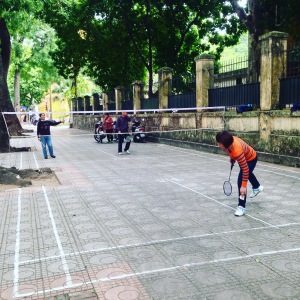 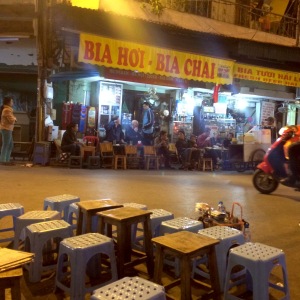 Sharing the road with swarms of buzzing mopeds, often carrying ladders, mattresses, and Christmas trees, can be daunting, but it was a bit like learning to swim. The waves of motorbikes flowing through the streets were never going to stop for us to dip a toe in; you just have to take a deep breath and dive in. Start walking, and they will slow and go around you. Stop, and you’ll be stranded.

Having mastered the basics, we set off to explore the Old Quarter. We spent more time wandering around this maze of streets than any ‘proper’ sightseeing; there’s so much going on and so much to see, a day had gone by in Hanoi and we’d not left the neighbourhood we were staying in. 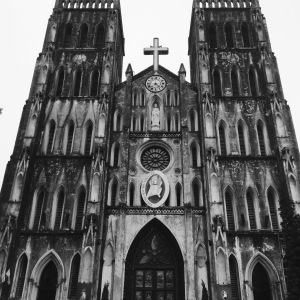 The buildings are a mix of French colonial, traditional Vietnamese and some Chinese styles. Street hawkers march up and down with shoe-shine kits and baskets of bánh rán donuts. Overgrown vines of banyan trees knot together with reams of tangled cabling overhead. Men hunch over games of Chinese chequers. Women crouch over tiny stoves on street corners preparing Vietnamese snacks. And around all of this is the endless stream of mopeds. Until you come across one of the many old communal houses or temples, and step out of the chaos into a quiet courtyard. 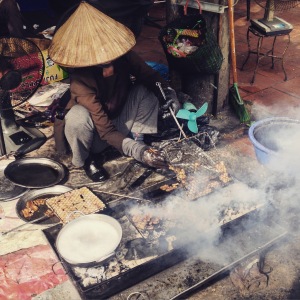 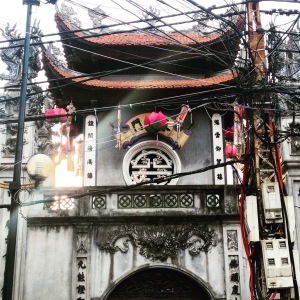 The streets in the Old Quarter are still named for the craft or industry that was originally based there. Hang Gai for silks and other fabrics, Hang Bac was silver street, and Hang Mam for fish sauce. We were evidently staying on Hang Christmas; every shop was crammed with tinsel, baubles, wreaths and santa suits for the whole family, including pets! Even the tuk tuks were getting involved. 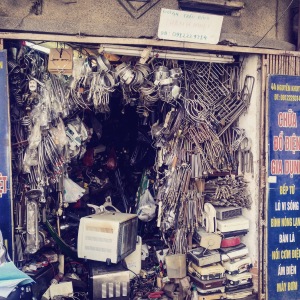 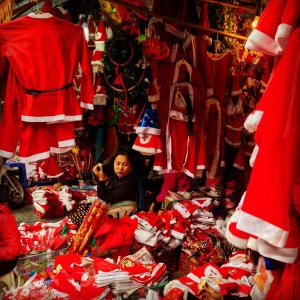 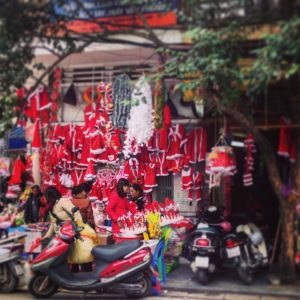 Unless they’re running you down on a moped (which can get Hanoi-ing), people are really, really helpful and friendly. Even a guard outside the Ministry of Defence smiled and waved as we walked by, although did shoo us away after apparently looking too long at the canon ball damage on the old citadel walls (classic spy behaviour).

For ‘proper’ sightseeing we had two things on our list; the prison museum and the Temple of Literature. Ho Chi Minh’s mausoleum would have made the cut if not for it’s 10.30am closing time. That’s 10.30AM… in the morning! The prison was built by the French to imprison Vietnamese dissidents, and later used by the Vietnamese to hold American POWs. One of the most memorable parts was the difference between accounts of the French- and Vietnamese- controlled times. Everything was written really emotively, giving quite a biased perspective of how unjustly the Vietnamese prisoners were treated (they no doubt were), but how they bravely fought back and used prison cells as schools for Communist theory, compared to the great conditions the American prisoners were given. The irony in the nickname ‘The Hanoi Hilton’ obviously got lost somewhere along the way.

The Temple of Literature was originally built to honour Confucius, decorated with tiled pagoda roofs, red lanterns, and ornate carvings of Vietnam’s holy animals; the dragon, unicorn, phoenix and tortoise. Probably feeling overshadowed by it’s far cooler counterparts, the tortoise takes a staring role in the carvings around the temple. The temple later became a university where people studied to become Emperor’s mandarins. From the 15th century onwards, names of those who passed the royal exam were carved onto granite slabs carried by stone tortoise shells.

Sightseeing had taken us south of the Hoan Kiem Lake, past it’s floating Ngoc Son Temple and fairy lights, to the start of the French Quarter. We spent an afternoon dodging the drizzle on Phố Triệu Việt Vương, hopping between small smoke-filled cafes of students huddled over card games, Vietcong military themed cafes, and stripped back espresso bars that wouldn’t look out of place in East London. 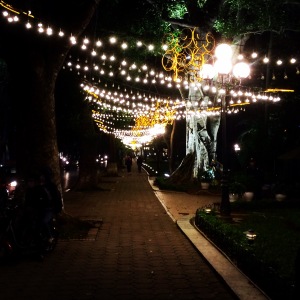 While the French Quarter had the cafes, the Old Quarter had the street food. A block or two behind our hotel were roads where, each evening, the tables turned and mopeds now had to gingerly find their way through hoards of people. This was street food central; every spare inch of concrete had a sea of people on low plastic stools, enjoying bia hoi (15p beer brewed each morning), bo pho (the famous beef noodle soup invented in Hanoi), both fresh and deep fried spring rolls, hotpots, and DIY tabletop barbecues. 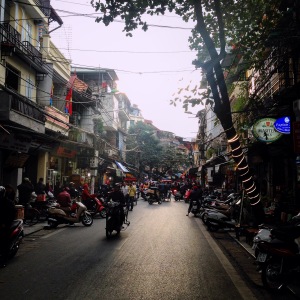 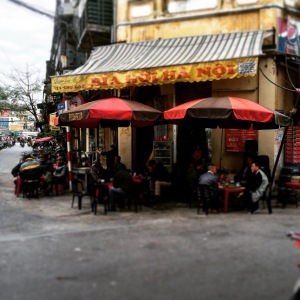 We tried them all. If that wasn’t enough, there was always a street hawker on hand with baskets of donuts. Nothing would deter them from making a sale, even having a mouthful of pho wasn’t reason enough to turn down a donut. Fusion food is great, but beef pho-nut is probably one step too far.