UNESCO know what they’re talking about, Halong Bay really is a must if you’re in north Vietnam, even if, like us, you only have 24 hours to see it. With a bit more time, it’s definitely possible to take a public bus to the marina, and pick from the many boats yourself, or take a passenger ferry to Cat Ba Island, but booking a 1 night tour meant we got to go kayaking, caving, see monkeys, visit floating villages and pearl farms, hike to hilltop viewpoints, and even squeeze in a cookery class without having to take care of any of the logistics. 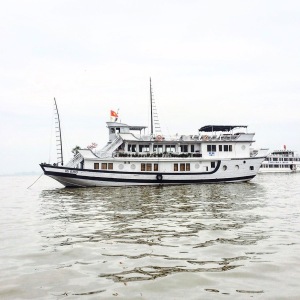 The bus from Hanoi to Halong City would have been ideal for a 3 hour nap to make up for the hideously early start, but our guide had other ideas. He kept up an impressively long running commentary on Vietnamese life; covering everything from marriage customs (if a boy’s family is poor and cannot afford a buffalo for the bride’s family, the boy becomes an ‘honorary buffalo’, working hard for the girl’s father for several years), funeral customs (the dead are buried twice; first the body with rice and fake money in the mouth to use in the afterlife, then later the bones are reburied separately once the soul has left the body), and farming (one tiny silk worm cocoon produces over a kilometre of silk thread).

Aboard the boat, once we’d checked out our cabin, the lounge, and sundeck, we set off from the harbour towards the towering limestone karsts in the distance. Our route took us first through the much quieter Bai Tu Long Bay. Close to Halong Bay, it’s less visited but no less stunning, and we made the most of photo opportunities with no other boats around. 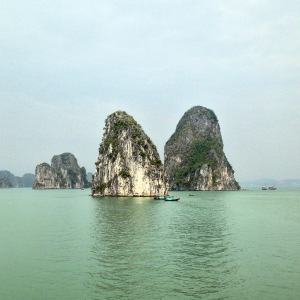 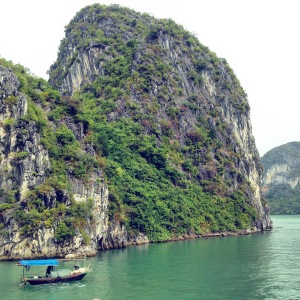 We explored more of Bai Tu Long Bay in our kayaking expedition. After a bit of bicep work kayaking across open waters and manoeuvring through narrow cave channels, we emerged from a low tunnel into a perfectly still blue lagoon, towering cliffs on all sides, and monkeys playing and climbing the rock face. Definitely time to whip the GoPro out. That’s when we realised, GoPro overboard! We paddled as fast as we could (really not that fast) back to the last selfie spot. It was in its waterproof, bright orange, floating case, so the odds were slim, but not impossible. After a few false alarms (leaf, small buoy) we dejectedly gave up and got on the little taxi boat that had come to give us a lift. Just as the captain revved the engine to speed off, Timian spotted it bobbing past on the surface! With the rescue mission complete and it safely back on board, our good luck was apparently up. Black smoke poured from the engine and we had to hop over to our second rescue boat of the day.

Camera now in a permanent iron grip, we were back on dry land for a visit to the ‘Surprising Cave.’ No, the surprise wasn’t that there is no cave. They were pretty impressive; gigantic caverns with Gaudi-esque rock formations. Our guide was keen for a game of What Does This Rock Look Like. Some really did resemble turtles and dragons, but others required a fair bit of artistic licence and optimistic squinting to see the shape he could see. 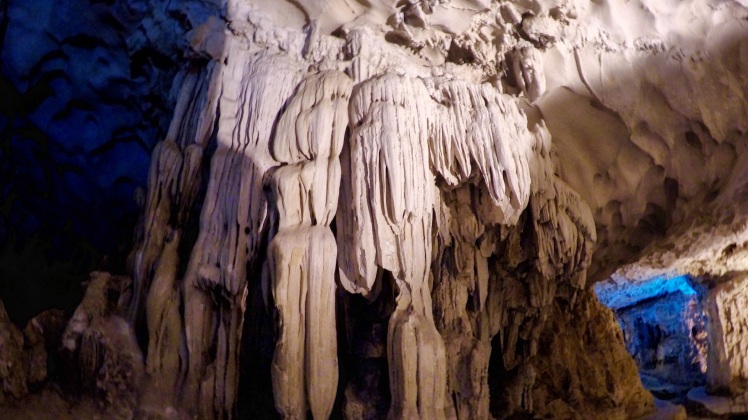 Back on board, next up was a cookery class before dinner. Ok, cookery class is a bit of a stretch. Essentially we assembled some fresh spring rolls, probably giving the chef a much needed break between the feasts he’d prepared for lunch and dinner.

In case we hadn’t had our fill of fresh seafood, we could try our hand at squid fishing from the rear deck once it was dark. After a while of fruitlessly jerking the bamboo rods around, patience levels were wearing thin (Rebecca stuck it out for all of 40 seconds, Timian was one of the last standing). After spending the last half hour encouraging us to keep trying, our guide then told us that, really, it’s much more likely when the tide is higher, or when there are more small fish around. Or when it’s April. Still, he had just one attempt and immediately caught one. 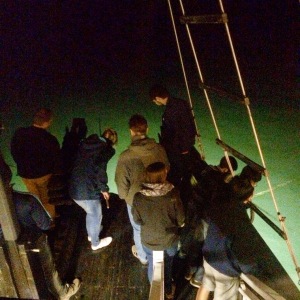 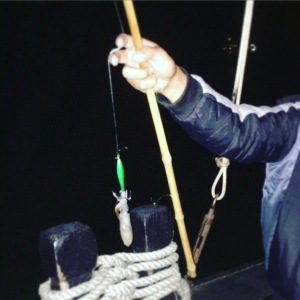 The next morning we were up early again, because, clearly, before breakfast is the best time to visit a pearl farm. At first it felt a bit like cramming too much into the itinerary, but was actually quite interesting to see the surgical procedure involved and the different oysters used. More interesting though, was the insight into life on a floating village, miles from the mainland; seeing washing lines strung out between floating bungalows, children’s toys on the narrow decking surrounding each house. 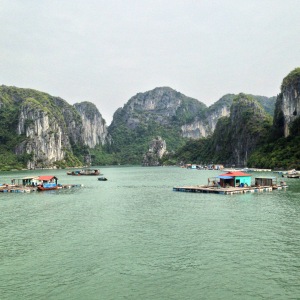 At a more civilised time, we were back in Halong Bay, breakfasted and booted, ready for the hike up Titop mountain. 425 steps later we were rewarded with a picture-perfect panoramic view of Halong Bay. Although maybe Halong Grey is more accurate as the wintery skies hadn’t yet lifted.

We did finally get some blue(ish) skies on the cruise back through the bay to the harbour. Everyone immediately bagged themselves a lounger on the sundeck where we learnt some things about international maritime rules – essentially the Highway Code of the sea – from an Aussie who works as First Mate on a similar boat on the Great Barrier Reef. Our Captain could have done with listening in as well; just metres from docking, he managed to plough our wooden taxi boat headlong into the side of another!

Neither captain seemed that bothered, so we piled onto the bus for the drive back to Hanoi for a final dose of delicious street food before our sleeper train south to the ancient capital Hue.