As we woke at 6am, half in anticipation of the ‘Vietnam Ho Chi Minh’ song pumping through the carriage speakers, our sleeper train rumbled across the former DMZ halfway down Vietnam and into Hue.

Brushing past the taxi touts (car, scooter or cycle), we walked through the grey streets of mid-winter Hue towards our hotel. Even at morning rush hour the wide empty avenues felt sleepier than you’d expect from the former capital.

With only a day to stay in Hue, we’d booked a cheap hotel with the plan to just drop our bags and head straight out to see as much as possible. That plan took an immediate hit when we arrived at the hotel. The amazingly friendly staff led us straight to a breakfast table, brought us a plate of jackfruit, mango, watermelon, and passion fruit, and gave us a menu. No charge, as we had to wait a whole 30 mins (!) until 8.30am for our room. £6 per person for a great room, breakfast both mornings and same-day laundry, is up there for one of the best value places on the trip so far.

Two plates of bacon and eggs, and two hot showers later, it was almost 11 before we set out across the river to explore. Half of Hue is contained within the massive moated square of the old town. Inside that is the further fortified city where we were headed; The Imperial Citadel where a succession of Emperors ruled Vietnam before and during French control. 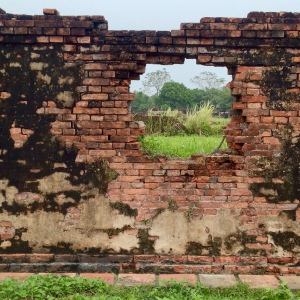 After a lot of war damage not much of the Forbidden Purple City remains inside the Citadel. But, beyond the imposing flag tower, where the last emperor abdicated to Ho Chi Minh’s Communist rule, there remains a maze of pagoda temples, crumbling ornate gateways, intricately designed palaces, and royal theatres, all embellished with mosaics and carvings of Vietnam’s holy animals; dragon, phoenix, unicorn, and tortoise. 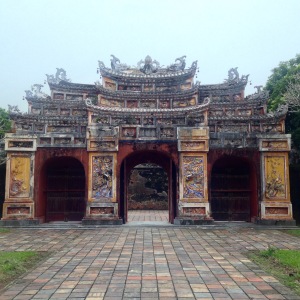 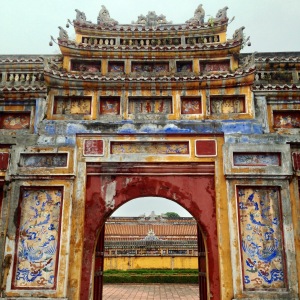 An Emperor led a cloistered and ceremonial life inside the citadel with his staff of Mandarins enforcing laws and advising him. Eunuchs would bring Emperors the best food from all over Vietnam, the first fruit crops, transparent rice grown only for him. But it was the official food taster who got the first bite, using chopsticks made from wood that changes colour if touched by poison. 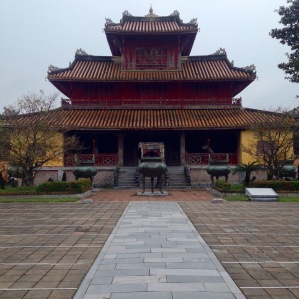 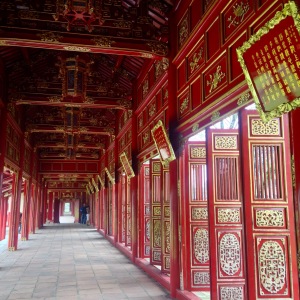 Back on the south bank of the river we tried some delicacies done the Hue way, but braved it without a food taster. At Mandarin Cafe, we admired owner Mr Cu’s striking photographs lining the walls over a Bia Hue before trying banh trang trung (a kind of Vietnamese taco), nem lui (barbecued pork on lemongrass skewers in rice paper), fresh spring rolls and a Vietnamese curry. As we were leaving Mr. Cu really kindly gave us two postcards of photos we’d liked. Which we promptly lost on the way to the train station. 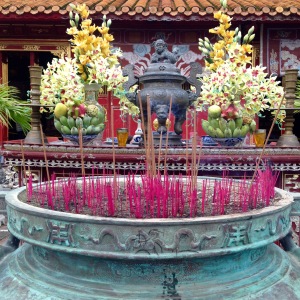 The moody grey skies followed us south on the two hour train journey to Danang. Expectations were low at first, having to evict some cockroaches from our seats and try to tune out the slapstick game show blaring from the carriage tv. But things improved quickly as we left the city. For one, we found our earphones. Soon the train was rolling past mist-topped green mountains, farmers with their water buffalo in rice paddies, waterfalls, and hugging the coastline past forest-covered cliffs, quiet coves and sandy beaches. 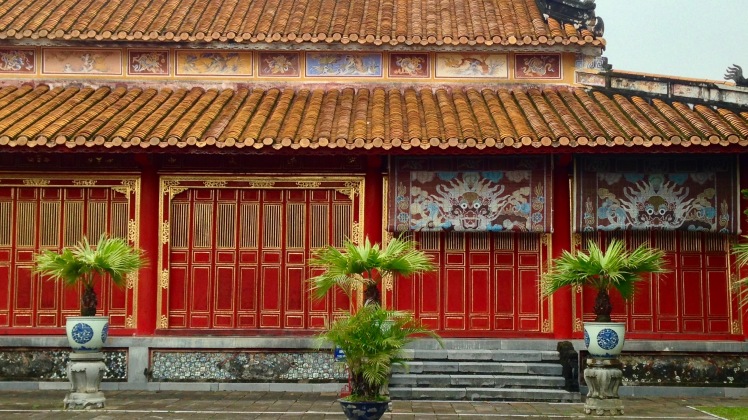 One thought on “Hue”