Arriving in a new country through a land border means that, instead of arriving straight into a busy airport terminal in a city, your introduction happens at a slower, more scenic pace. From the Prak Chek border we had a 1hr drive to Kampot watching the countryside, dotted with palm trees and small straw huts, roll past the window.

Set along the Praek Tuek Chhu river, southeast of the Elephant Mountains, Kampot is a small, sleepy town that easily wins you over. People come to relax for a few days, but in many cases those days slip into weeks or, judging by the number of Europeans living here, sometimes years. It’s easy to see why. 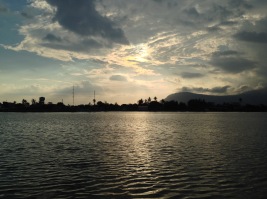 Kampot is not somewhere you come for a packed itinerary or with a long sightseeing checklist. Arriving on January 2nd, the checklists on our minds were the usual New Year’s resolution lists posted on Facebook and as motivational Insta-quotes. Turns out, Kampot is a great place to tick off some New Year’s resolutions, whether you’re trying to or not…

This one’s easy. The pace of life in Kampot is dialled way, way down. Our guesthouse was quiet and, having sold us on the promise of ‘Western mattresses’, we found ourselves easily sleeping in until 10am each day. If that’s not enough, most cafes close at 4pm giving another nap opportunity until the bars and restaurants come to life in the evening. 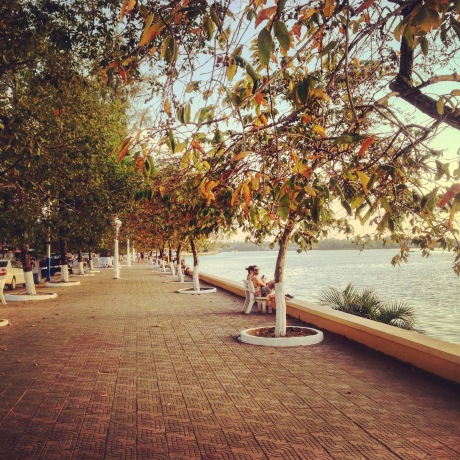 We first set out to explore Kampot by $1/day bicycles. It’s not a big place, and easy to navigate by the durian fruit roundabout, the salt worker sculpture roundabout, and the 2000 roundabout (or the Ooos roundabout depending which side you’re standing…).

Making our way up and down the quiet streets, we saw a mix of traditional and French colonial buildings (all a little weathered and crumbling in an appealing way), children playing along the riverfront, and the Old Bridge. The Old Bridge looks like the work of 4 different designers who each started the job, got bored as the bridge extended into the water, gave up, and passed the job to someone else with a completely different design in mind. And probably varying ideas about safety regulations, as it’s now closed to the public. 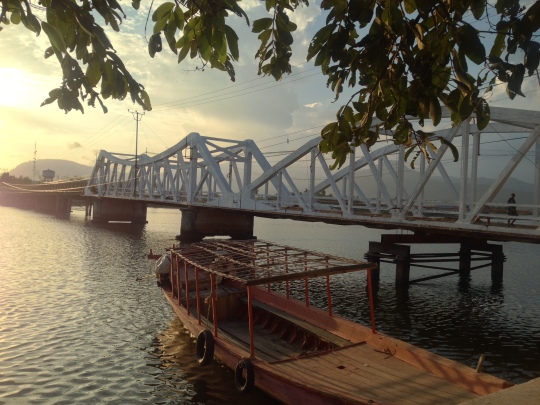 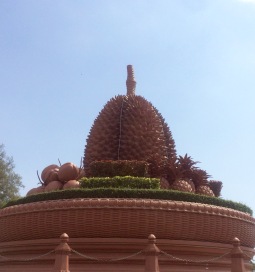 We cycled across the river on the (much more boring looking) New Bridge and almost immediately found ourselves in the countryside. The road turned into a dirt track, the buildings became progressively smaller and spaced apart, and water buffalo grazed in the fields. Following a track towards the river we got a glimpse into daily rural life; young monks coming to and from their temple, sheets of rice drying outside small houses, children lazing in hammocks or chasing roosters, and, at the end of the track, a fisherman preparing his nets for the next catch. All to the unexpected soundtrack of a dub mix drifting from a party at a house across the fields. 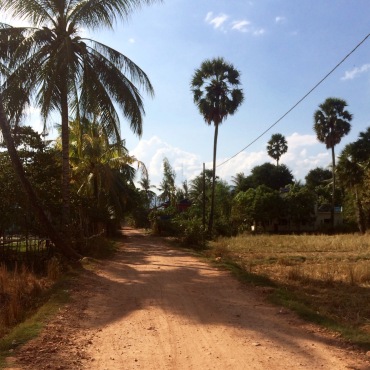 After the leg workout cycling around the countryside, we opted for an arm workout the next day and hired kayaks. We were struck by how little traffic there was on the river, the only sign of life we saw was a little shuttle raft taking locals and their scooters from one bank to another. 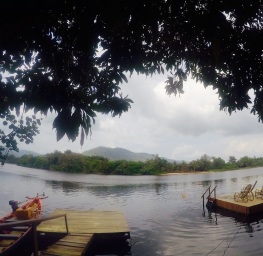 Having been in South East Asia for over a month, we still hadn’t tried durian fruit. Banned in hostel dormitories and on public transport, the ‘marmite of Asia’ divides people into those that love it and don’t understand the fuss, and those that hate it so much they can’t get beyond the smell to even contemplate the taste. In the spirit of trying new things, and being in a town that’s dedicated a roundabout to the stuff, this was the time to try it.

Perhaps it was a sign, but once we’d made the Durian Pact, we couldn’t actually find any. Well, either a sign, or the fact we always slept in and missed the fresh produce markets. This left us with two durain flavoured options; the rice crackers given away for free with our scooter petrol top-up, and durian ice cream. The ice cream smelt decepively fruity, but it was a cruel trick. They both tasted like the plague; a horrible mix of onions, stagnant water and a sweaty gym locker. 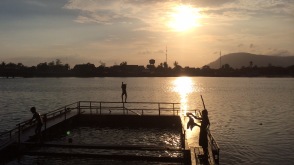 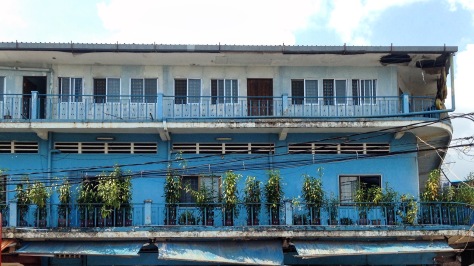 Durian aside, it’s easy to eat well in Kampot, and certainly easy to eat inexpensively. It’s up to you whether it’s healthy or not; you’re never far from a roadside stall selling fresh fruit shakes or coconuts, but the big (and culinarily-talented) expat population means that there’s Swiss fondue, Spanish tapas, and French galettes, all tempting you away from a health kick. Clearly, we fell at the first hurdle and went straight for the fondue.

The following night we had our first taste of Khmer food at the fairylight-clad Rikitikitavi on the riverfront. We tried lok lak; peppery stir fried beef with steamed rice, fried egg and pickled vegetables, and cha traop dotty; minced pork with smoked aubergine, steamed rice and vegetables. These were both delicious, but the best thing about eating local Kampot food is the local Kampot pepper. Green, red, black and white varieties are all grown here and are liberally added to everything from beef and pork to brownies and cookies.

You can also eat good food for a good cause in Kampot; Epic Arts cafe is a community project run by and for deaf people, and Sisters II helps fund a local orphanage. 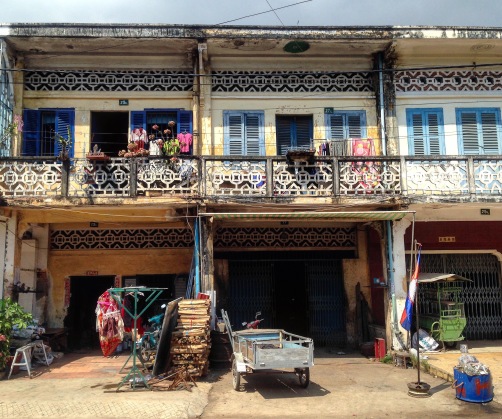 Lesson learnt. Kampot is a also place that teaches you to keep your options open. It’s easy to see how people get ‘stuck’ here; without big plans we could easily have lazed away a few more days here. Stories of Sihanoukville’s seedy bars and dirty beaches meant we dragged ourselves away from the scratchy gramophone jazz and fresh granitas in our favourite cafe with more than a bit of trepidation. If Sihanoukville does live up to its reputation, we’ll be on the first boat to an island or on the first bus back to Kampot!