Whilst parts of our trip nearer the start – like the Mongolian ger homestay or the Indian sleeper trains – were planned and sorted before we left the UK, when asked about our whole trip we’d go from these specific plans to a rough route through South East Asia, ideas about Fiji and Cuba, then inevtiably trail off with a vague “and then we’ll, umm, just travel round South America.” Except for one thing: The salt flats. They’d been a definite for far longer than we’d been planning and saving for this trip.

Imagine if Salvador Dali and Willy Wonka had been let loose to design the south west corner of Bolivia together. They’d start with a cactus or two. What goes well with desert cacti? Coral, obviously. Lots of coral, the snow-tipped Andes, an active volcano, flamingos, a cemetery for rusting British trains, tassle-wearing llamas, and finally they’d tie the whole thing together with a seemingly never-ending expanse of pristine white salt that stretches to the horizons like a frozen ocean. It’s bonkers. Bonkers, but brilliant.

Fresh(ish) off the Todo Turismo overnight bus we were met by the free pick-up service offered by Red Planet Tours and driven round the corner to their office before starting our tour. Given the worst thing about overnight buses is the unavoidable combination of bus and overnight, Todo Turismo did a pretty good job of making it bearable. The free dinner was an airline style rice and veg meal, the seats reclined almost all the way back, each with a blanket, a cushion and individual headphone sockets for the movie, and the free breakfast included Oreos.

Bundled into our Red Planet 4×4 with Luis (our guide/chef/driver), two Italians, a Japanese girl and a British girl, we set off for the train cemetery just outside of Uyuni, passing our first wildlife spots: llamas and eicuna deer whose wool can be sold for up to £1,000 for 1kg. The llamas, both wild and farmed, became a regular spot over the next couple of days (frustratingly regular when we were trying to spot the elusive ostriches… Is that an ostrich? Nope, false allama). They’re easy to tell apart as instead of branding the animals, llama farmers decorate their flock with brightly coloured tassles on their ears!

The train cemetery is home to dozens of rusting freight trains that make for some good climbing frames and fun photos. The trains were made in the UK and shipped to Bolivia in the early 20th century to transport silver and tin, but when the government couldn’t afford to keep them in use they were abandoned. Thanks to the lack of any security, they were quickly looted for anything worth taking, and thanks to the vicious salt winds coming from the plains they quickly rusted into the shells there today. 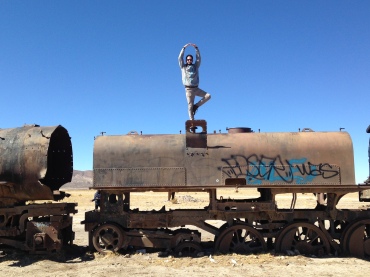 Next, we stopped at Colchani mining village for lunch. This was the first of several times Luis would amaze us by what he could whip up with the mini kitchen he had in the back of the 4×4.

We saw the process of making table salt, as well as salt bricks used as building materials. There were stalls selling the usual llama knitwear, big bags of salt and comedy props for salt flat photo shoots. Other than the odd Godzilla purchase, nobody was buying much. We’d have happily parted with a few Bolivianos if someone had been selling cones of chips flavoured with local salt. But no need, it was lunch time. Luis had prepared quinoa salad (a big Bolivian staple that would feature a lot in our meals), chicken, lentil and vegetable stew, and cupcakes – seriously, he produced iced banana cupcakes for dessert!

After Colchani we’d reached the salt plains. The road had long since turned into a bumpy track, but now even that disappeared and Luis was expertly navigating us across the expanse of nothingness to a deserted spot for the standard comedy salt flat photos – this is where the dinosaurs, some chopsticks and our jumping abilities came in.  The Matrix-esque white void was just surreal. In the far distance there were sunlit mountains, and at our feet the interlocking hexagons of the salt, but in between just bright white salt and bright blue sky.

Luis was a total pro at the funny perspection distorting photos; he knew all the poses, the best angles, and – his most niche skill – exactly how to arrange the dinosaur. 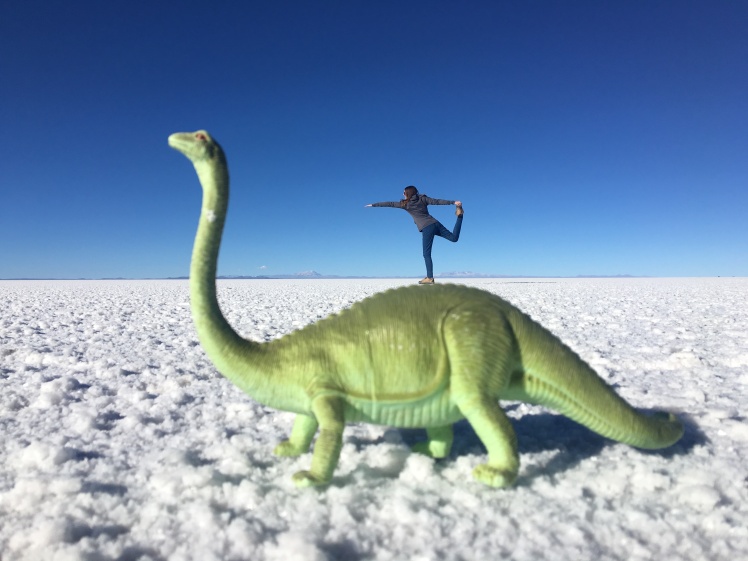 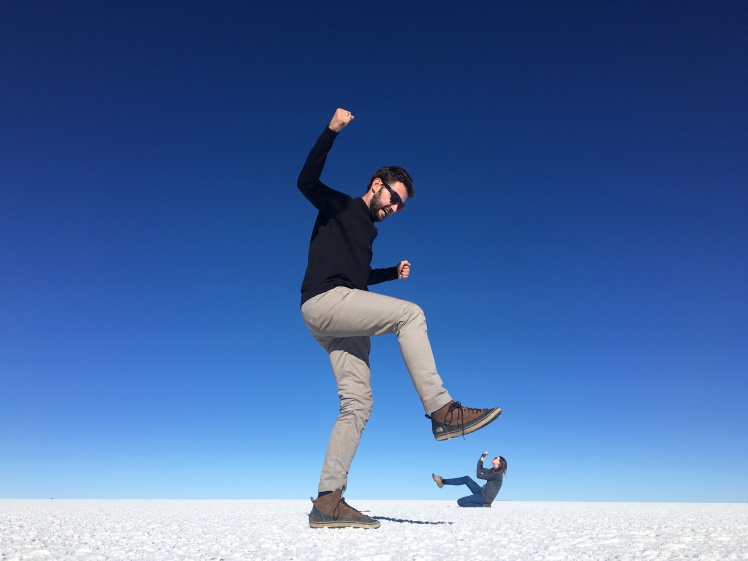 Isla Inchahuasi is where the Daliesqueness (what? that’s a word) of the landscape comes into its own. Before the orginal lake dried up leaving behind the salt plains, the water level used to be far above this cactus covered ‘island’, so what looked like boulders and rocks were in fact coral that would once have been deep underwater. The salt even rippled at the edge of the island like the tide. 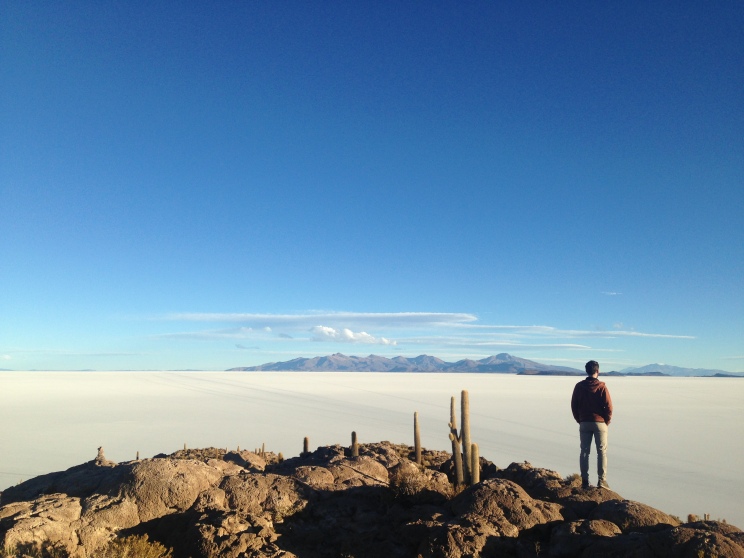 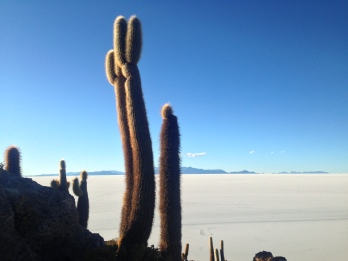 That night we stayed in one of the most unique places of the whole trip: A hotel made of salt. The walls, the floor, the tables and chairs, the bed and bedside table were all made of salt! After a spectacular sunset, an amazing starlit sky and the Milky Way, we tried another Bolivian staple, pique macho (chips topped with diced hot dog sausages, boiled egg and onions. Not quite quinoa and cupcakes… ), before heading to bed. The tip for the salt flats is to pack layers. All of the layers. We slept in three layers of clothes, silk sleeping bag liners, fur-lined sleeping bags, hats, gloves, and under a heap of blankets. Toasty. 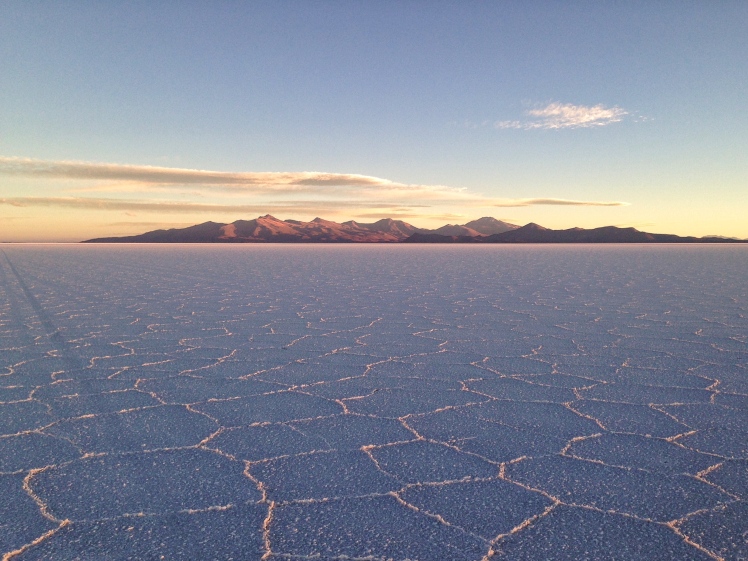 The next morning we set off after a sunrise breakfast for a day of volcanoes and flamingos. We drove towards Ollagüe, an active volcano near the Chilean border, and stopped to explore at different viewpoints. The mountains here are 5,800m above sea level, and in true bizarre Bolivian style, amongst the thawing snow was yareta, a green ocean plant that’s also adapted to survive at this altitude – it’s used for aches and pains in a medicinal tea. 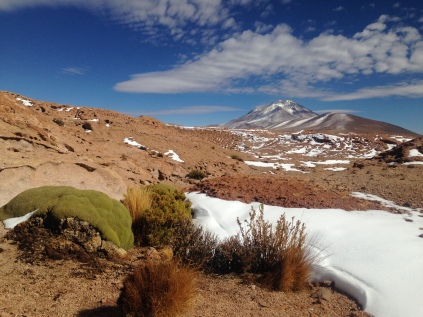 Today’s picnic lunch was just as tasty as the day before – more quinoa, vegetables and breaded chicken fillets – served lakeside with the most impressive views of the whole tour. Snow covered mountains were reflected in the thawing waters of lagoons, the sun turned yellow grasses golden, and pink flamingos stalked along the edges of the lake. 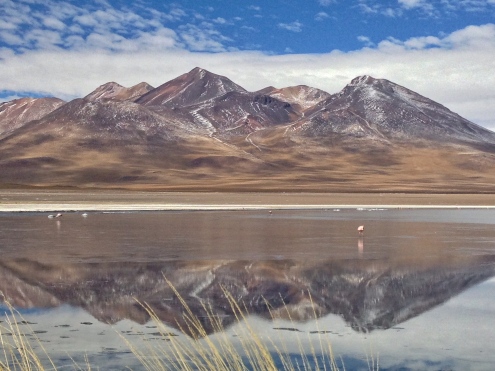 Prices for salt flats tours vary a lot. Red Planet tours were at the higher end of the spectrum, but definitely worth it for Luis’ friendly guide style, great cooking, photography skills and mechanic know-how. We had an unexpected photo stop when he needed to swiftly change a tyre (with help from glamorous assitant T) after the offroad bumping had taken its toll. He lent out his towing rope to another group whose 4×4 had revealed itself to be more of a 2×2 and got stuck. 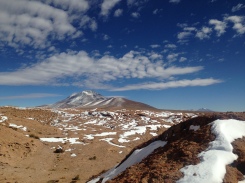 Yes it was at times indescribably cold, and not always the most glamourous travelling and sleeping conditions, but this crazy corner of Bolivia was easily a huge highlight of our travels in South America and a big favourite from our whole world trip. 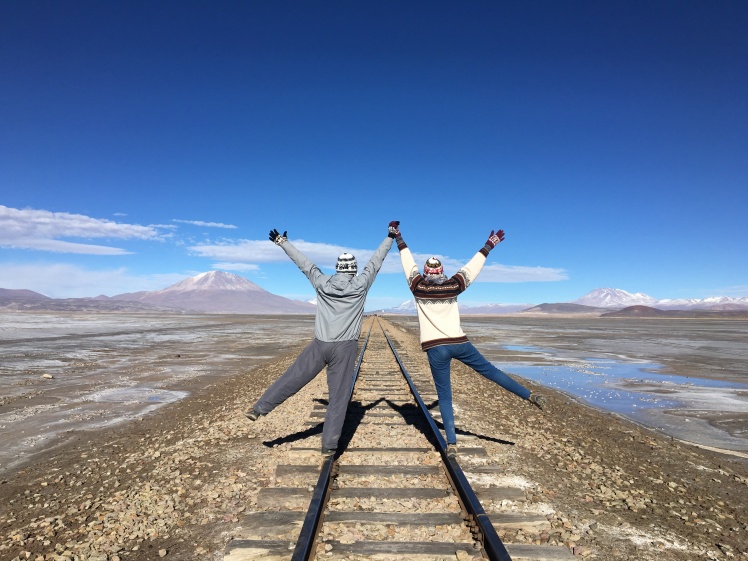