In the station waiting room at Ulaanbaatar (‘UB’ to locals), it’s fair to say we stood out like a sore thumb. The group of tourists from the Irkutsk-Ulaanbaatar Trans-Sib train had initially gone their separate ways, but now sat together again working out plans of action. A distinct smell wafted in from the restaurant. Mongolian mutton dumplings, Buuz, were on the menu again. At 6am (anyone for a Buuz-y breakfast?)

Swerving the throngs of English-speaking touts, taxi drivers, and tour operators, we went in search of our driver Davaa. All Davaa knew was that he was looking for someone called Rebecca. Just an English man named Rebecca somewhere in the station…

After establishing that neither Timian, nor our train buddy Shane, were Rebecca, we set off to meet our host family at their ger camp on the outskirts of the Terelj national park. On the way we picked up Ganchimeg who runs the ger stays. Her English was perfect – she explained that she’d decided to study it for four years at University because she’d realised that tourism was going to grow a lot in Mongolia in the coming years.

Before arriving, all we knew about Mongolia was based on one man: Genghis Khan. Turns out we’d even got that wrong. ‘Chinggis Khaan’ (silent K) is how Mongolian’s pronounce his name, but you can’t spend long in UB without realising that. Just minutes from leaving the station car park we’d passed Chinggis Bank, Bank of Khaan, Grand Khaan Irish Bar, Chinggis Club (serving Khaan beer) and Chinggis Heights Apartments.

The high-rise buildings and hummers soon gave way to sprawls of dirt-track suburbs, with combinations of gers and brick houses at various stages of construction. The movement from nomadic existence to more permanent living was evident, and at every turn you could feel the city groaning under the speed of construction, as resources and space were stretched to breaking point. Sometimes beyond: we regularly had to swerve off the road and into the dust to avoid jack-knifed lorries and pot holes mid-repair. Rebecca, as ever, still had no problem catching some zeds in the minivan. 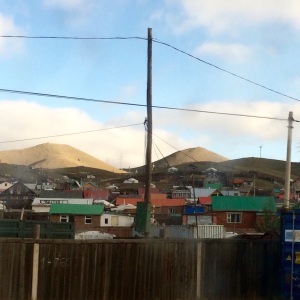 UB has the unfortunate title of the second most polluted city in the world (though particularly in winter when smog closes in from the surrounding ger camp fires), so there couldn’t have been a bigger contrast once we stepped out to the clear air at our host family’s camp.

Four white dots in the middle of the grassy expanse of Mongolian rolling hills, our camp consisted of a couple of horses, a shack with a hole in the ground for a toilet, three dogs, and a row of four gers. The one belonging to our host family, Davasuren and Yadmaa, stood out both in size and, particularly, because of its solar panel and satellite dish.

Our ger was spacious and more decorative than we’d expected. There was minimal furniture; just a couple of beds around the edge, a low table and stools with a flask of hot water for making tea, and a wood-burning stove in the centre. On the table was a very short set of instructions; go wherever you like and if you want something just ask Davasuren or Yadmaa. After realising that ‘horse’ and ‘Mongolian’ had exhausted the family’s English vocab, the rest of our communication with them was an exaggerated game of charades. They did try to teach us ‘thank you’ in Mongolian, though all seemed to pronounce it differently and our attempts just set them into fits of giggles. Later that morning our archery skills had a similar effect… 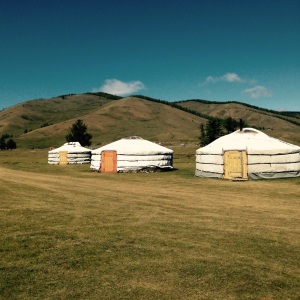 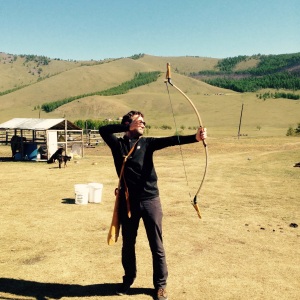 Once we’d met the family, had our first home-cooked meal, we picked a direction at random, and went for a walk with our ger neighbours, Joe and Rachel, and heard about their travels in south-east Asia. In the evening we picked up a haul of hostel recommendations over a few games of cards and more of Yadmaa’s home cooking.

We didn’t have great expectations for the food at the camp, and whilst every meal was a variation on a mutton-based theme, Yadmaa’s food was tasty and each meal we had was (slightly) different. The key ingredients were mutton, potatoes and some vegetables, and of course buuz made an appearance once or twice. Our best guess from the Lonely Planet food descriptions was that we had Sholte Khool. This literally translates as ‘Soup with Food’. You can say what you like about Mongolian cuisine, but you can’t complain about what you’re given with a cover-all-bases name like that (please, please let it not have been sheep brain). 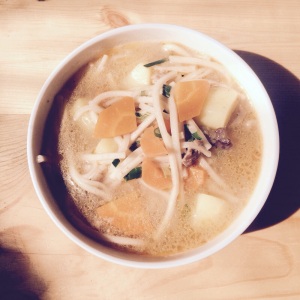 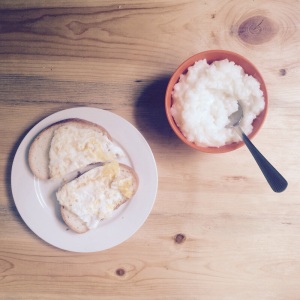 We saved horse riding for the warmer second day. The scenery, unsurprisingly, didn’t change much from views of vast plains. We passed through herds of yaks and cows, and Davasuren took us to meet his extended family working on their own camps, farming crops, and let us help with some entry-level goat herding. He still herds on horseback, though we saw many younger Mongolians using motorbikes. 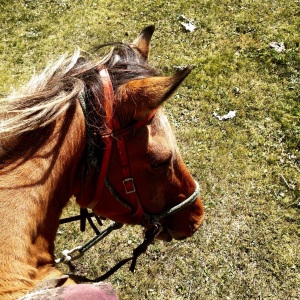 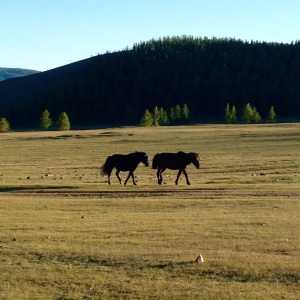 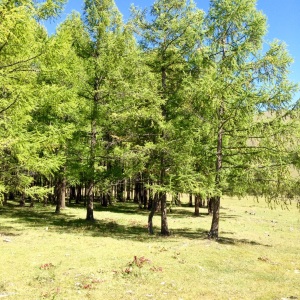 We were driven back from the camp to UB by Ganchimeg, her sister, brother-in-law, and their two young kids. Ganchimeg realised we hadn’t had a chance to try Airag, Mongolia’s famous alcoholic fermented horse milk drink (what a shame…) This clearly had to be fixed immediately and, after a quick u-turn on the main road, we bumped off-road towards a small ger. Outside the ger was a boy waiting behind a table. On the table was a 2 litre coke bottle filled with an opaque white drink, which they assured us was airag. After a birthday toast for Timian we crossed our fingers and…bottoms up! Turns out, tastes like cider.

En-route back to UB we had asked to go to the huge Chinggis statue that’s recently been built next to the Terelj National Park. ‘En-route’ turned out to be more ‘off-route’ with a 4-hour round trip. Just as we were starting to regret asking to go there, we saw the gigantic, gleaming silver statue on the horizon and it all seemed well worth the drive. It was the first time Ganchimeg’s niece and nephew had been to the statue so there was quite a bit of excitement in the car as we approached. Apparently it’s only in the last 20 years that children have been taught about Chinggis Khaan in school and there is a renewed sense of pride about him across the country. The statue, of Chinggis on horseback, sits on a two-storey round building and is just enormous. You can climb up to the viewing gallery in the horse’s head for an impressive view of the countryside and also Chinggis himself glaring menacingly down at you. 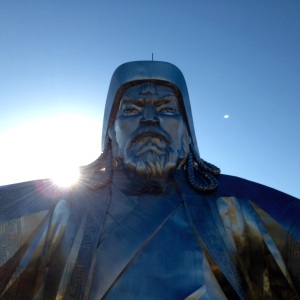 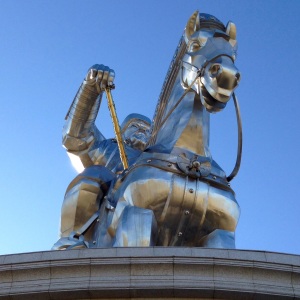 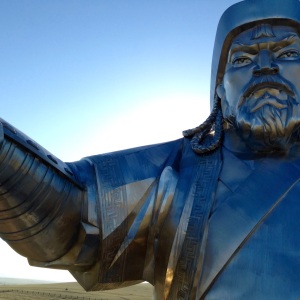 On the drive back to UB the kids slept after tiring themselves out with a heated game of Mongolian scissor, paper, stone and Ganchimeg told us more about life in Mongolia. There is an expression in Mongolian that if you leave four men alone together, soon two of them will start a wrestling match (the national sport). And, true enough, as we passed another construction site we saw two men in high-vis wrestling at the roadside.

Our three days in Mongolia showed us two very contrasting ways of life in Mongolia. On our final evening in Mongolia we were back in central UB, at a restaurant on the 23rd floor overlooking the main square. (Which square? Yup, you guessed it: Chinggis Square). After all things mutton for two days we indulged in gourmet (needless to say, beef) burgers for Timian’s birthday dinner looking down on the lights of a big city that seemed a million miles away from our ger in the middle of nowhere. 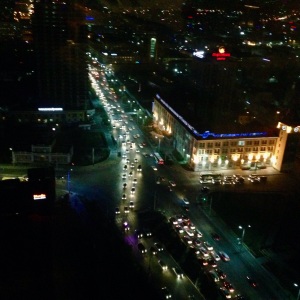