If huge colonial architecture is your thing, then Quito is definitely the place to go. Ever since Tupac ruled the city (no, not that Tupac) and it was at the heart of the Inca world, this urban sprawl perched on top of the Andes has been the cultural, religious, and financial centre of what is now Ecuador.

Our impression, though, was while this has meant huge investment over the years leading to it being by far the grandest Spanish-era cityscape we’ve seen in Latin America, that this maybe comes at the expense of an energetic youth culture more visible in the university city of Cuenca we visited later. 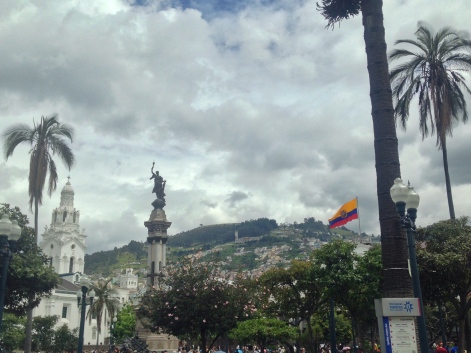 We arrived at midnight after 3 days pinballing around Central America; some quirk in Avianca’s booking system meant it was cheaper to get there from Panama by spending 36 hours flying south to Colombia, then north to El Salvador, before heading south again to Quito.

A few miles drive from the airport we crested a mountain top and caught our first glimpse of a stunning sea of yellow dots lighting the valley below. “Wow!“, we said. “Not Quito“, our driver said… over the next hill, and an even bigger “Wow!” … “Still not Quito“. When we finally did set eyes on the city and it’s stunning spires, via modern motorways carved into the mountains, we really got a sense of arriving into a cultural and geographical epicentre.

The ground floor of the grand, balconied buildings that line the steep and narrow streets of Quito is where you’ll find lunch. In stark contrast to the buildings that house them, Almuerzos are budget-friendly restaurants serving a set menu (soup, meat, dessert) in a no-frills setting. Outside, the streets echo with traffic wardens’ tweeting and chirping – it’s like they direct the traffic with bird whistles and drivers have somehow learnt to understand them.

We started in the busy Plaza Grande, in the middle of the Old Town, lined with archways leading to quiet courtyards, the Palacio del Gobierno, and the cathedral. Getting more use of our STA youth cards, we paid the $2 student price which included entry to the attached museum and the tomb of Antonio Jose de Sucre – the Venezuelan who liberated Ecuador from the Spanish. We’d read that we should be looking out for the Escuela Quitena style of paintings here. We knew from the guidebook that this often involved indigenous symbols smuggled into Catholic imagery. The painting of The Last Supper (although really high up and poorly lit) shows Jesus and the disciples tucking into tamales and cuy (guinea pig). We’re no art critics, but it also seems to involve portraits where the default expression is either alarmed or annoyed. 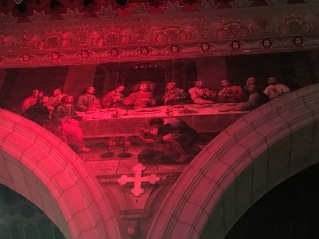 A small, unassuming side door in the church led us into the museum. Mostly showing various ceremonial Bishop clothing and more Escuela Quitena portraits, it fast turned into rabbit warren of corridors that took us through tiny courtyards, through what we’re pretty sure were some nuns’ living quarters and back out into the church through a small opening in a floor-to-ceiling shrine.

We also made a stop at the Iglesia Franciscano with its baroque-a-f interior, so densely decorated that there wasn’t a bare patch of wall on show. The bar had been set high after Santo Domingo in Oaxaca, but this took the crown for the most lavish church we’ve seen.

The Plaza Santo Domingo was supposed to be our next stop, where street performers and buskers entertain the good people of Quito. What had escaped us was that Mondays are a (second) day of rest in Ecuador, and we were met instead by a few solitary pigeons in the square. We snapped a couple of photos of the green tiled domes, and headed on to La Ronda. 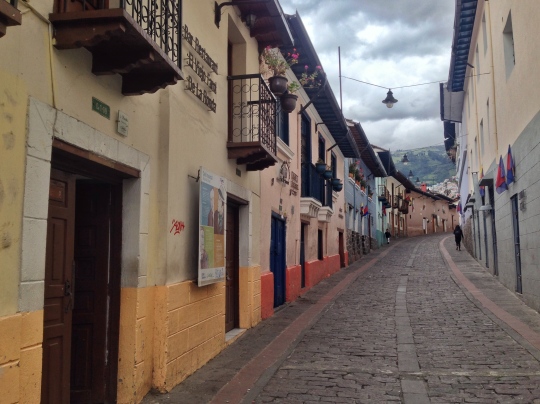 In a historically conservative city, La Ronda was for a long time an alleyway of debauchery carved into a low hill at the southern end of the city. It’s now been gentrified into an artisan alleyway with quirky bars, cafes, and local craft shops. Again, we were hit by the Monday curse (even Happy Mondays bar was closed), but a couple of things were open. The Galapagos tour agencies weren’t missing a chance to sell some supposedly discounted cruises – $800 per person cemented our decision to go with the DIY approach. Also open was the local tin man’s tin workshop where he makes weird, but kind of cool, metal miniatures of everyday objects. 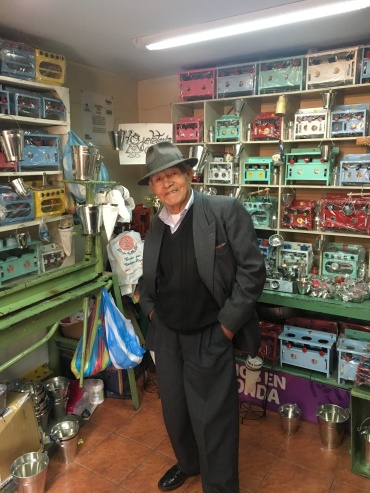 As in Bogota, one of the highlights of this already dizzyingly high altitude city (2800m) is to head even higher to the top of a nearby hill. Or in Quito’s case, a hill plonked right in the centre of the urban sprawl. El Panecillo (the little loaf of bread), is easy to spot from across town by its towering Virgin Mary statue. The advice is to take a taxi up to avoid pickpockets, which is as good a reason as any, given you’re short of breath much more quickly due to the altitude. The view at the top was impressive, but thanks to the cable car ride up and even more expansive views, Bogota’s Cerro de Monseratte remains our favourite high altitude city view. 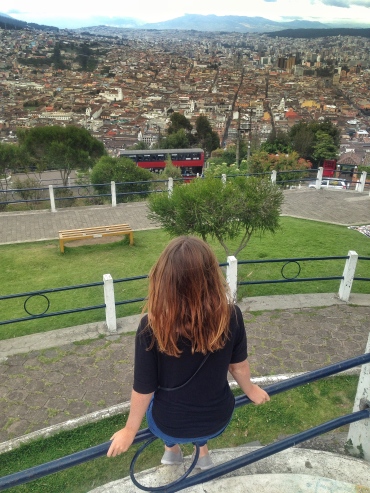 While we spent all day in the Old Town, we actually stayed in ‘gringolandia’ La Mariscal. Whilst La Mariscal’s tourist bars weren’t really our scene, the cafe dedicated to chocolate, right on our doorstep, definitely was. We figured eating and drinking chocolate for dinner is a must-do in the country that was once responsible for producing 75% of the world’s chocolate.