We’ll be upfront about this: If you’re looking for the definitive guide to San Salvador, this is not it. A guide to maximising airport layovers, maybe. El Salvador seems to be the black sheep of Central America; its reputation as the most dangerous country in the region keeps it off most peoples’ itinerary, but our experience was that locals are working hard to overcome its blacklisted status.

We figured that there must be more to El Salvador, and in our short time saw the beauty of the country’s volcanic landscape on the drive from the airport, experienced the openness of its people in cafes and churches, and learnt that El Salvador is considered to be in ‘peace time’ with treaties struck between government and narco gangs leading to over 50% drop in serious crime.

We’re not usually big fans of organised city tours, but, with only a few hours to spare (and operating on only a couple of hours’ sleep snatched at Bogota airport) having someone drive us between the city’s highlights, tell us where to look and what we should know, then shuttle us back to the airport in time for our next flight, for once sounded kind of appealing. San Salvador must see a lot of sleepy travellers with time to kill between night flights. At Gate 6 in Departures there is a desk dedicated to day tours. They handle everything from speeding you through immigration, keeping hold of bags you don’t want to bring, and the tour itself.

The airport is a 50km drive from San Salvador, built on the only flat land the country has. Every other square inch of land is essentially a volcano. San Salvador sits in ‘hammock valley’; the land that’s been buffeted and shaken around by the 4 surrounding, active volcanoes – one of which is due a major eruption next year!

The drive into the city took about half an hour, which our guide had no trouble filling with a bit of background on the country and city. Of 6 million Salvadoreans, 3 million actually live in the US. The combined total of the money they send home to their families is bigger than the government’s spending budget. Another thing sent back from the US are the names of the famous Salvadorean narco gangs: MS13 and Barrio 18 (there is no Barrio 18 in San Salvador). The link also extends to the civil war, when millions of dollars were spent in the US on arming the various military factions in the 1980s civil war.

As we drove nearer to the city we passed the gated mansions of the rich high up in the hills, and the gated communities of the middle classes at the edges of the city. This was our first stop; at a viewpoint overlooking the whole city spread out in the valley below. After a huge earthquake destroyed the city in 1986, Japanese volcanologists and geologists advised the government not to rebuild in the centre. The commercial centre was moved out to the edges, and the big hotel chains and middle classes followed.

Between this area and the city centre we passed mall after mall, and American chain after American chain. Our guide was one hand very proud to point out the international brands, but on the other clearly frustrated that shop prices had simply switched currency sign when the dollar was introduced, whilst salaries were suddenly worth 8 times less.

Arriving into the city centre, pot-holes, graffiti and abandoned buildings appeared on every street. Those who couldn’t afford to move out to the suburbs remain in the ground floors of these buildings, but aren’t allowed to use the second and third storeys due to the earthquake risk. 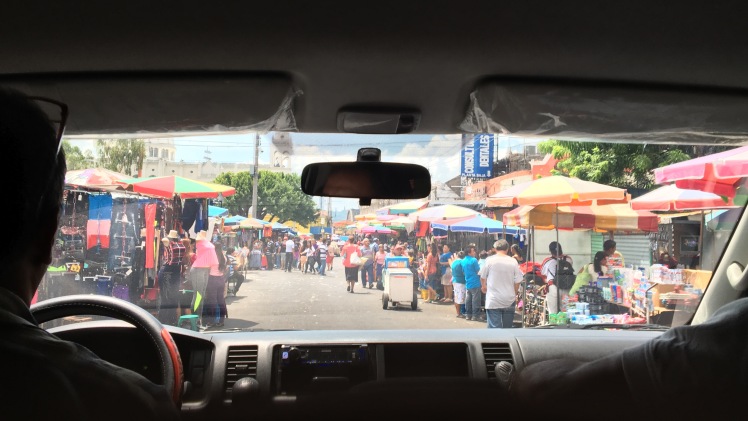 Our second stop was Simon Bolivar square, beyond the market stalls we were itching to get out and explore. Whilst the tour was the most efficient and easy way to use our few hours in the city, it also meant giving up the freedom to make our own itinerary as we went along.

From the square we went around the edges of the mass being held in the city cathedral and down into the second service being held simultaneously in the level below where the body of Bishop Oscar Romero is entombed. Oscar Romero was assassinated on the steps of the church in 1980 after speaking out against the government. More than 40 people were killed by snipers at his funeral in the same square. More than just a symbol of what happened to those who spoke out against the corrupt politicians, he gained martyr status as an inspiration to overthrow the regime and people are petitioning for him to be made a saint. 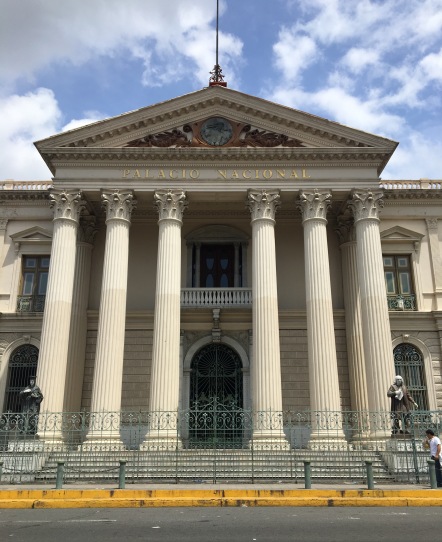 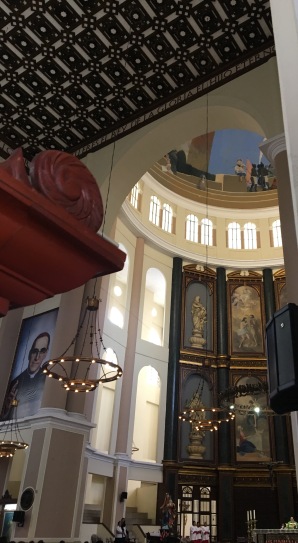 Whilst San Salvador’s cathedral has a grand colonial style, El Rosario church just a few blocks away barely looked like a church at all. From the outside it looks more like a concrete bunker. From the inside we realised the point of the huge curved roof. It was covered in stained glass and followed the arc of the sun across the sky, making beautiful patterns across the walls and floor. The minimal, modernist design was originally hated by city officials in the 1960s – for being one step too progressive. Even the stations of the cross (14 stages of the crucifixion that are usually depicted in paintings) were reimagined in abstract metal and stone sculptures. 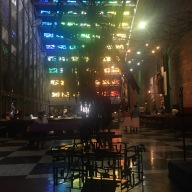 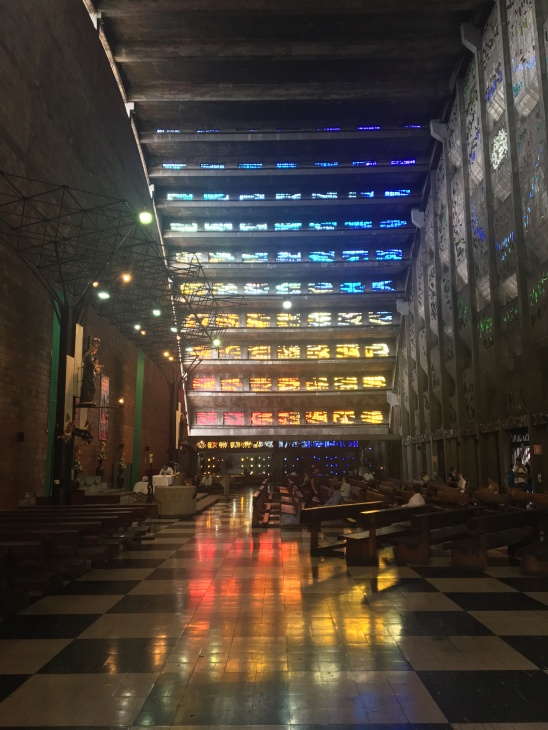 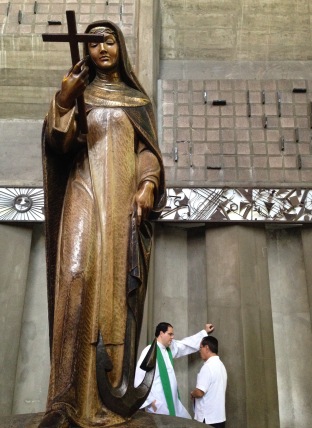 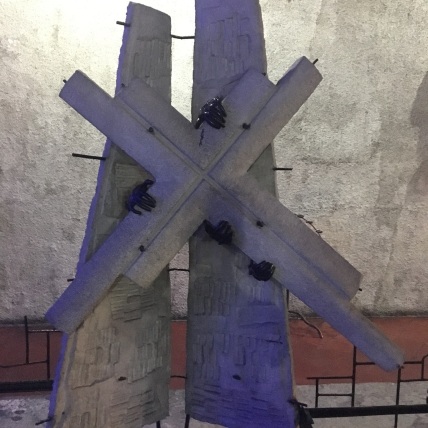 Next up was a slightly bizarre stop at a military base. After declaring the nationalities of everyone in the bus we were allowed in (our guide accidentally-on-purpose forgetting to mention our Chinese co-passengers). Waiting for us beyond the armed guards were some tanks, planes, a Pope-Mobile from his Holiness’ 1986 visit, and a 3D scale relief map of the country. We’re not sure if visiting here is even possible when not on a tour, but it’s skippable, unless you really like tanks. Or Pope-based vehicles.

Having been promised the chance to try pupusas (Salvadorean street food), the last stop was always going to be our favourite. On the road back to the airport we turned down a side road to find cafe after cafe selling just pupusas; thick corn tortilla pouches stuffed with cheese, beans and pork. After wolfing down two 50 cent ‘repuestas’ each (the name for the classic cheese-bean-pork combination), we paused to watch the set-up for the Biggest Pupusa In The World Guinness world record attempt before getting back to head back to the airport. 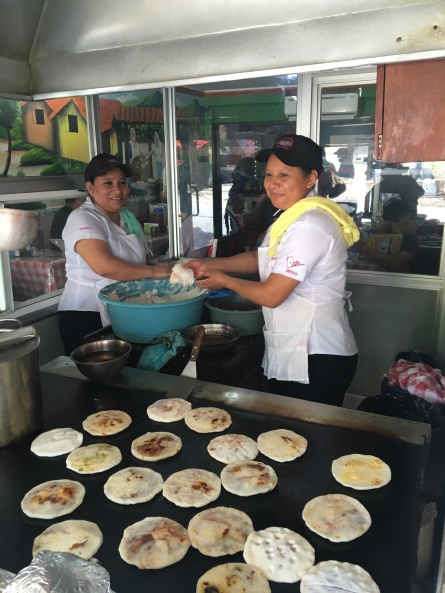 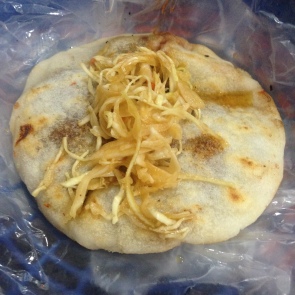 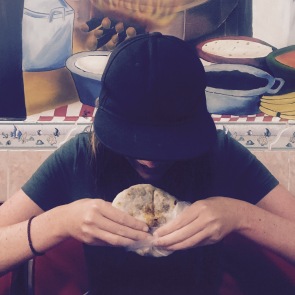 We left feeling very happy to have made the effort to get a taste of the country, and that the tour was good overall. But, with more sleep and time on our side, we’d rather have spent less time in the car and more time wandering around.

Between the barbed wire fences around the houses of the rich, the underinvestment in the more vulnerable centre, and the echoes of mass shootings of those who spoke out against the regime, conflict feels fresh in the memory in El Salvador. BUT, with the huge drop in crime, a stunning landscape, great (and cheap) food, and people working hard to prove a warm and safe welcome, it’s easy to see how El Salvador could soon move past its negative reputation.