And so you find yourself on the southern border of Mexico, waiting to catch a boat to the Belizean island of Caye Caulker. It is 32 degrees in the shade, your backpack’s straps are heavy on your shoulders, you’re being watched by humourless, armed Mexican police – a patrolling sniffer dog alert in case one member of your ragtag group of backpackers and ex-pat fishermen are actually international drug smugglers – and you’re about to get on a 90 minute bumpy boat that will leave your arse so bruised it would look like you’ve joined a fetish S&M club. At this point, it would be easy to feel envious of your friends who booked that all-inclusive resort holiday to Corfu… If you didn’t have a palm-lined Caribbean paradise waiting for you at the other end, that is.

There is one boat a day that goes from the southern Mexican city of Chetumal to Caye Caulker. It leaves at three in the afternoon, and takes you via San Pedro where you will go through customs and immigration. This isn’t the cheapest ride in the world (55 USD each way), and Mexico levies a leaving tax for tourists of 340 pesos. This tax is usually paid as part of your flight into the country, so make sure you have a cost breakdown of your flights on your phone with you to avoid paying it (Timian and Rebecca did, but I wasn’t so lucky). The entire trip, including immigration in San Pedro, takes around three hours. By the time we arrived, we were ready to lay back in the sun, Belikin beer in hand, and do as instructed by Caye Caulker’s unofficial motto: ‘Go slow’. 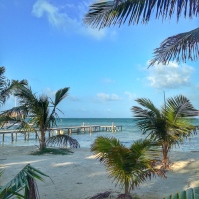 Caye Caulker is a tiny island, one mile in width and five miles in length, with a split down the middle caused by a series of hurricanes, separating it into a north and south island. It’s like a tiny, tropical version of New Zealand, but without sheep or hobbits.

Belize, being a former British colony (gaining independence is 1982), has a distinctly Caribbean feel compared with its Latino neighbours. The official language is English, although most locals speak Creole, as well as Spanish. The currency, the Belize Dollar, rather hilariously, has a picture of the Queen circa 1960, so every time you pay for anything you get to see our spritely monarch in her 30s. 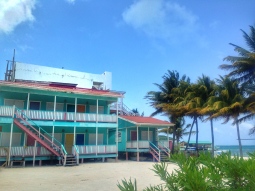 But where to spend this money? Just one mile east of the island is the world’s second largest coral reef, which has tours for snorkelling and diving. We took the highly recommended Raggamuffin day tour, which leaves at 10.30am and returns at 5pm. The tour cost us 130 Belize dollars, and included three snorkelling stops in the Hol Chan Marine reserve. It included snorkelling with nurse sharks (harmless), swimming with stingrays (harmless), feeding frigatebirds with sardines (mostly harmless – I ended up with a cut finger), and, before ending the day, drinking Captain Vito’s rum punch (lethal in large doses). But such is the relaxed atmosphere of Belizean culture, if you ask Captain Vito nicely, he will even let you sail the boat, even after a few large rum punches. 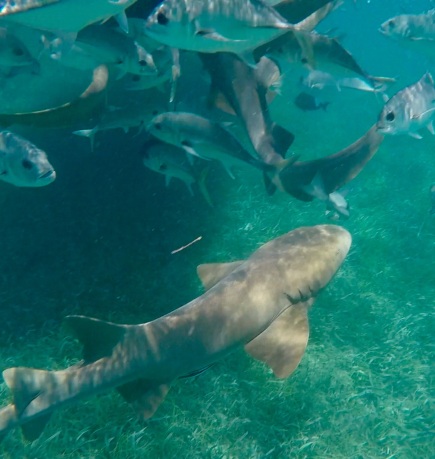 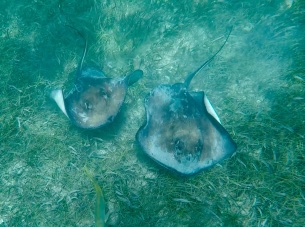 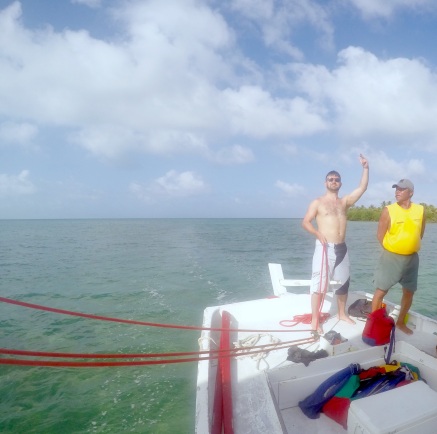 Back on dry land, we spent a significant amount of time in the Lazy Lizard during the day (found just next to the island’s split) and Sports Bar and I&I Reggae Bar at night, which are the town’s liveliest after dark haunts. After a few too many drinks in both establishments, myself and Timian commandeered the golf cart taxis that take you between bars (there are virtually no cars on the island). Tip them enough and they will let you drive, allowing you to careen through the sandy lanes and even on the islands’ airport runway, which in reality is little more than a mile of tarmac for single engine planes. We put the pedal to the metal and hit some serious speeds, at least in excess of 14mph! It was an adrenaline junkie’s dream. 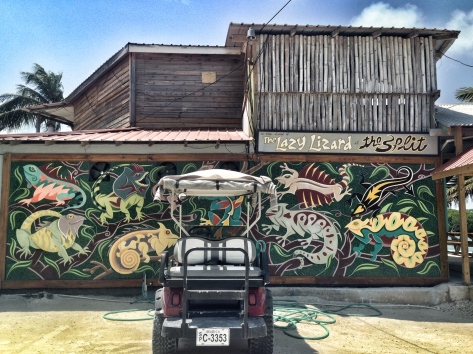 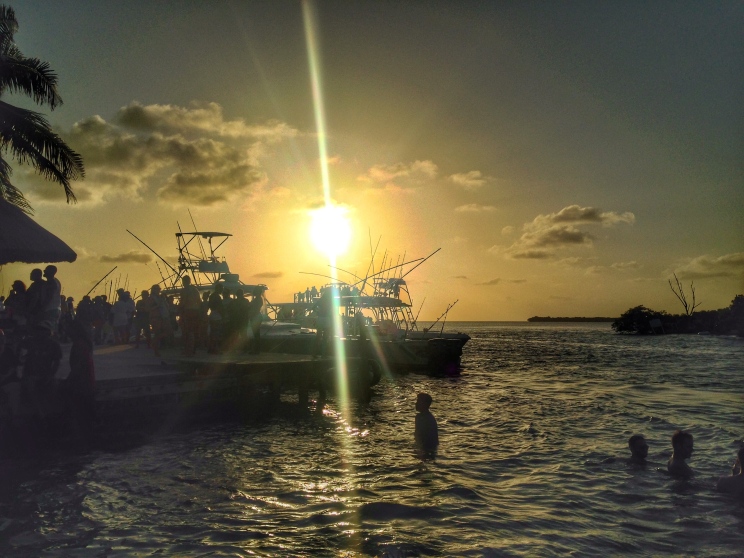 After four nights of boating, sunbathing, cocktail drinking, and general easy living, it was time to head back to Cancun, where I was due to fly back to London, and Timian and Rebecca would catch the plane to San Jose. After grabbing a couple of fry jacks – the local delicacy of deep-fried dough stuffed with a choice of refried beans, cheese (and a long list of other equally nutritious fillings) – we took the return boat to Chetumal and, as we went through immigration, the sniffer dog took a particular interest in one of our fellow travellers bags. The last we saw of him, he was pale faced, escorted by four police officers, a smug looking dog trotting alongside, satisfied with a job well done. 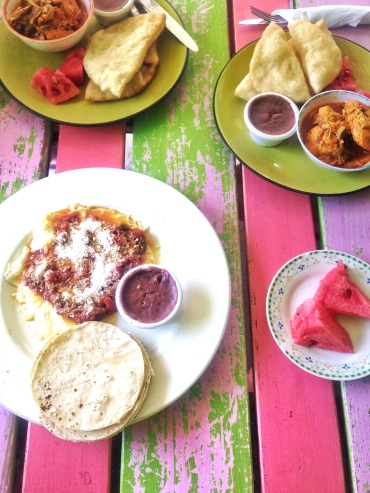 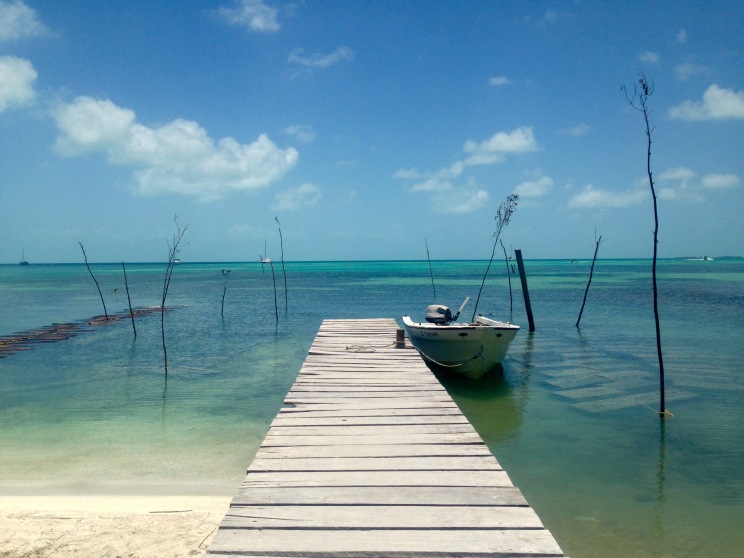 The bus from Chetumal runs direct to Cancun, where we found the cheapest beachfront room we could (45 USD). Cancun is the stuff of legend; spring break, beach parties, drinking games, wet t-shirt contests, a throbbing hive of activity and hedonism. So image our surprise when we arrived to little more than miles of empty beach and a long stretch of semi-deserted hotels. It turns out, when it’s not in season, there isn’t much to the Cancun strip, and we weren’t too disappointed that we were only spending one night in what was a glorified, sun-drenched ghost town.

The following day, before our flights in the afternoon, there was just enough time to rent out a jetski and at least get some sort of action in Cancun (even if it wasn’t the sort one would expect). Half an hour rental costs around 800 pesos. Because it was out of season meant there was almost nobody else on the water, so we did our best to max the machine out, hitting waves at 50mph (a significant improvement on the golf carts). 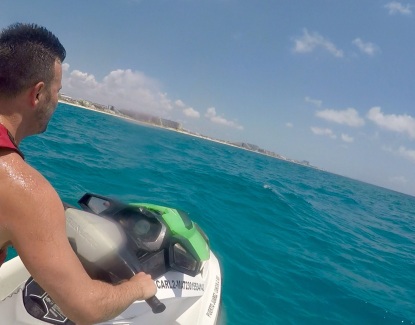 After the fun was had on the jetski, it was time to head to the airport for the inevitable departure. As I waved goodbye to Timian and Rebecca, it was hard not to be envious of their travels up to that point, and the adventures they would be embarking on over following four months. However, England (and a depressingly enlarged work inbox) beckoned, so I sank a final cocktail in the airport, boarded my plane, and watched as the Central American landmass slowly drifted into the distance. 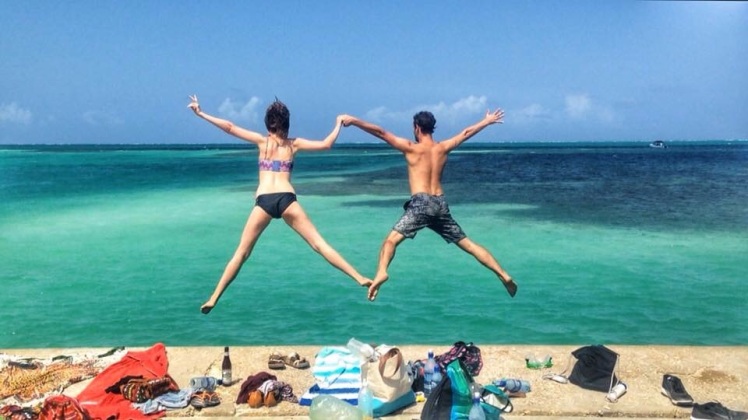