And now for something completely different; or the day Liam joined the trip.

Last September, just before Timian and Rebecca had left old Blightly for their twelve month adventure around the globe, I had met with them in a north London pub to bid them bon-voyage. After a few pints, the subject was raised of flying out to visit them at some point. Like all opportunities or ideas presented after a number of drinks, I naturally agreed that this was a fantastic idea. The following week, after the two of them had caught that fateful train in Moscow, I promptly forgot this promise and got on with my life.

However Timian and Rebecca, whose memories apparently operate with more clarity, did not. And so, around February I started receiving text messages asking when and where I would be joining them. And so I booked the cheapest flight to Cancun that I could find and cursed the day that I made travel plans when drunk. We would be spending five nights in Tulum, heading down to Caye Caulker in Belize for four nights, before a return trip up to Cancun for one night. From there Timian and Rebecca would fly off to the exotic jungles of Costa Rica and I would return to the more mundane streets of Brixton. 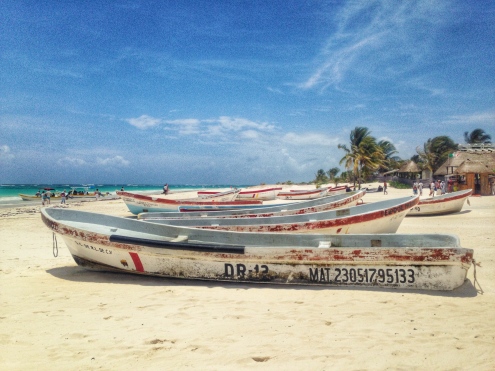 I arrived at Gatwick at 7.30am, giving me a comfortable two hours before departure to eat breakfast and relax into a day of travelling. Unfortunately there was a slight hiccup when I went to check in the bags. “I’m sorry sir,” the polite but stern looking lady at the check-in began. “There has been problem with the plane and your flight has been delayed.”

Apparently some genius on the runway had driven one of the luggage transporters into the landing gears of our plane, damaging it enough to require a replacement plane, delaying the flight for over four hours. This is never news you wish to receive at such an early hour when you have a ten hour flight and a two hour coach journey in front of you. Even worse is the fact that four hours is the perfect amount of time for British holiday makers to get unpleasantly drunk in the Gatwick Weatherspoon’s. We left at 1.30pm, and by the time the flight was underway, the drunks were getting rowdy. It was like watching newsreel footage of English hooligans throwing plastic furniture across the square of European cities during a football tournament. Except the plastic furniture is the in-flight meal, and the town square is a pressurized cylinder traveling 600 miles an hour at 50,000 feet.

The shaken passengers and airline crew were therefore incredibly relieved when the plane touched down on terra firma 10 hours later in Cancun (there was also a sense of poetic justice when you saw the drunks being met by armed Mexican police when they disembarked from the plane).

So after the debacle of the plane, I was greeted by Timian and Rebecca who had waited patiently at the airport for me for several hours. We jumped on an Ado coach (120 Pesos), which would take us straight to Tulum. It was spacious, but because of their aggressive air-conditioning, it felt like you were sitting in a comfortable, mobile igloo.

Tulum is a sleepy town, a couple of miles from the Caribbean coast. We stayed in a Airbnb (£55 between us per night), and were greeted by Roberto, who showed us round the apartment and also recommended us La Chiapaneca, a restaurant where you could get two tacos for 7 pesos (£0.33p). It was so cheap, we ended up eating there almost every night we were there. Apologies for not exploring Mexican cuisine as extensively as we could, but when your meal of 6 tacos and a drink is about the same price as a single espresso in London, it’s hard to go somewhere else. 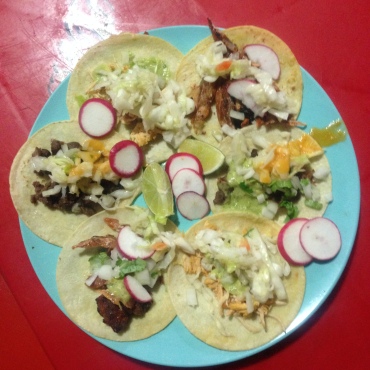 When we weren’t gorging ourselves on obesely cheap tacos, we were exploring the sights of south-east Mexico. Tulum National Park is a short cycle from the town (bikes and scooters can be rented easily). It is smaller than some Mayan walled cities, but its location sitting on cliffs overlooking the ocean, and the fact that it’s heavily populated by deceptively friendly iguanas, makes it definitely worth visiting. Further down, the beach is mostly all-inclusive resorts, so while it’s picturesque, you also feel like you are intruding on young American couples trying to enjoy their expensive honeymoons. 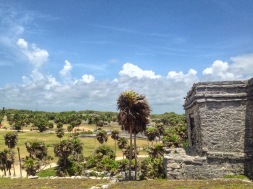 We hired a car to explore further afield (there a plenty of coach experiences for tourists, but they seem vastly overpriced, and you lose the autonomy to plan your day). Chichen Itza is the most obvious destination, the most famous of all the Mayan cities (entrance is just shy of 200 pesos). We were advised by some seasoned Australian (who else) travellers at the car rental office to set off early, as by midday the place gets both unbearably crowded and unbearably hot; like the Central Line in summer, but with better architecture. We left Tulum at 6.30am and arrived at the site for 9.30, when it was still very quiet. The ruined city can be explored in a couple of hours, as there is a large variety of buildings, from pyramids, temples, royal residences, observatories, and even the skeleton of a sports stadium. We left at 11.30, right at the time that coach loads of tourists started piling through the entrance. 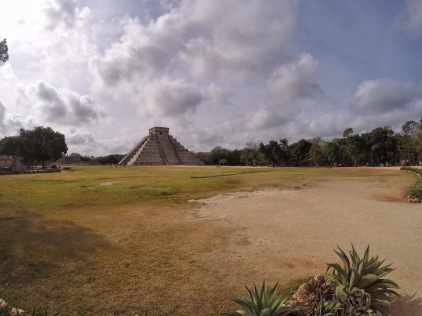 Near Chichen Itza are several cenotes, which we went on to visit on the same day. The Ik-Kil cenote (70 pesos) is located in between Chichen Itza and the small town of Xcalacoop. With a large coach park, gift shop, and changing facilities, it’s equipped to deal with large amounts of tourist, who will generally arrive once their tour has taken them around Chichen Itza, so again an early start means you can keep ahead of the crowds. Arriving at 11.30 we were the only people in the water, able to enjoy a peaceful swim as well as diving (read: jumping) practice. Also nearby is the Yokdzonot cenote (also 70 pesos). This is located in a more rural location, and has much less footfall. It’s perfect place to relax before the long drive back to Tulum. 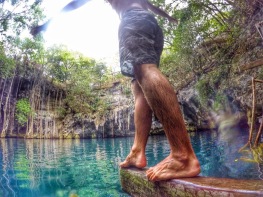 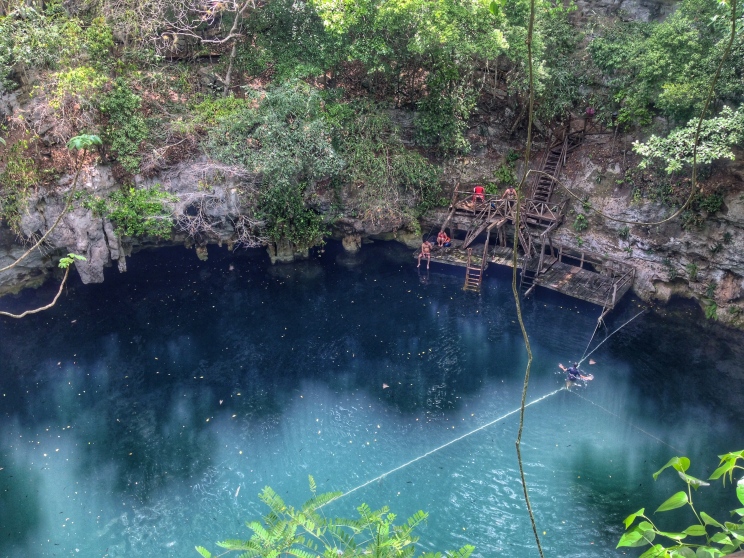 Closer to Tulum, there are a several more cenotes (because, you know, you can’t visit enough cenotes). Temple of Doom (70 pesos), in appearance, looked little more than a sinkhole in the back of someone’s back garden. However it earns its namesake because its caves are crawling with bats, so not exactly for the squeamish. More friendly animals can be found in Gran Cenote (100 pesos), which hosts turtles that you can snorkel with. Diving trips are also available to explore the more extensive underwater cave system. 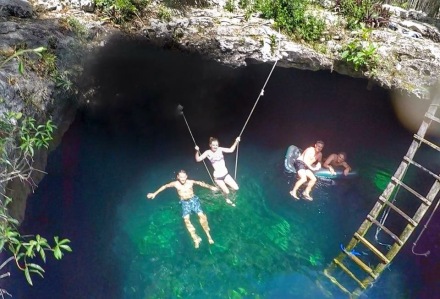 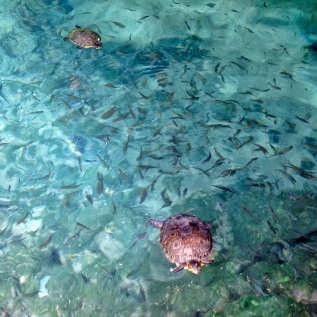 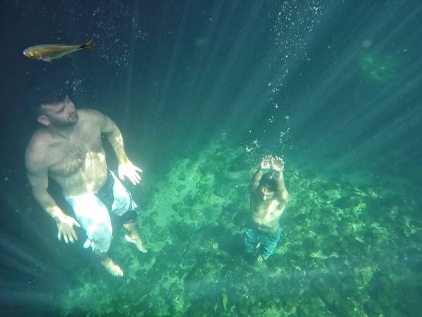 After five nights in Tulum, which was basically spent in a haze of tacos and cenotes, it was time to say goodbye to Mexico and head to Belize. An Ado coach will take you all the way from Tulum to Chetumal (220 pesos) and then there is a daily boat that will take you out to Caye Caulker. But that is for another post.