Our 45 minute flight from Manila took us to the tip of Palawan island. It was AirSwift’s first day as a grownup airline in the main airport; the day before they were still taking off from a private hangar. But everything, from the wooden boarding passes to the free brownies, showed they were still doing things their own way.

After a stunning view of Bacuit Bay as we landed, a painted jeepney whisked us away to the prettiest arrival terminal we’ve ever seen; an open-sided thatched roof bamboo hut sat amongst trees, flowers and a couple of cows. A line of singing ladies greeted us and ushered us towards the snacks of suman, coffee and juice. The jeepneys returned, now stuffed with everybody’s baggage which was unloaded onto a wooden table in the garden. 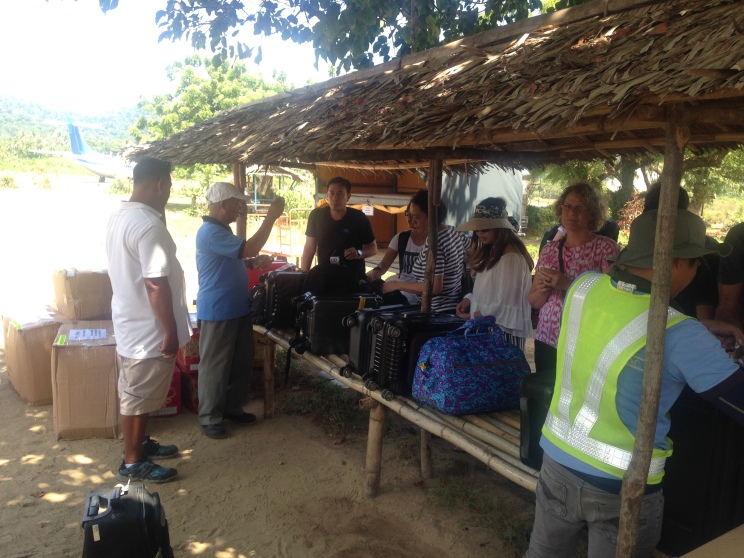 Once our tricycle was cleared to leave the airport – a double, triple check that the plane had taken off again – we bumped across the runway and out onto the road. A bumpy 30 minutes later we arrived to an El Nido in full fiesta mode. We were incredibly lucky with our timing; our 5 nights coincided with several celebrations; the fiesta for their patron saint, the town’s centenary and a Miss Palawan beauty pageant. Following the parades of birds, monkeys, waves, feathered headdresses and drummers was a great way to explore the streets. 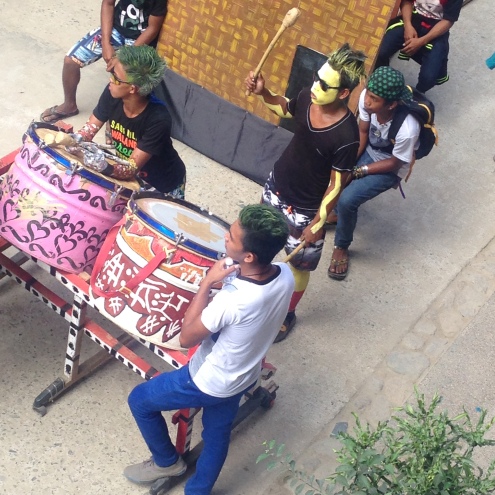 We didn’t have to look hard for entertainment that night, either. Right opposite our hostel the beauty pageant was in full swing, with the local anthem pumping out from every speaker (the chorus – “El Niiiiiiiiiii-do, El Niiiiiiiiiiiiiiii-do” – think Spanish fiesta music sung by a German beer hall crooner, is still stuck in our heads weeks later). Contestants from each barangay of Palawan island paraded before the panel of local business owner judges in glittering evening gowns and bigger and bigger traditional costumes; some with wings or halos so wide they had to modify their strut towards the stage into a sideways crab-strut to get through the crowds!

El Nido is squeezed between a big curved bay full of bangka boats, and a wall of sheer, towering black cliffs behind. The beach is used more for extra bar and restaurant seating than sunbathing, and even the first couple of rows of chairs and tables are claimed by the sea at high tide.

Las Cabanas beach was just a ten minute tricycle ride away and had everything we needed for a full beach day; a long sweep of sand, clear waters, hammocks, beach massages, fresh coconuts and a bar positioned perfectly for sunset. 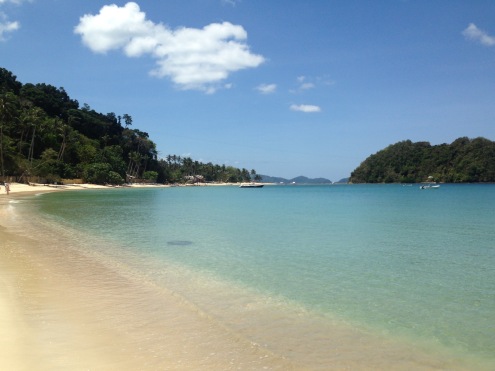 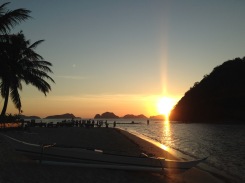 We arrived with our accommodation booked and plans to sort our archipelago trips once there. This turned out to be the wrong way round; there were no end of affordable guesthouses down quiet side streets taking walk-in bookings, and what had quickly become clear as the best island-hopping option was fully booked. Asking at El Nido institution Art Boutique Cafe (cafe, restaurant, flight booker, tour booker, convenience store, and, of course, art boutique) about the overnight camping trips, pointed us in the direction of El Gordo. After a couple of failed attempts to find this tour office, we’d consigned him to mythical Latino-Palwan bandit status, but one final attempt was successful. We left the main tourist streets, and soon the cafes, tour offices and dive shops gave way to small wooden homes, broken bangka boats, and cockerels scratching around in the dust. 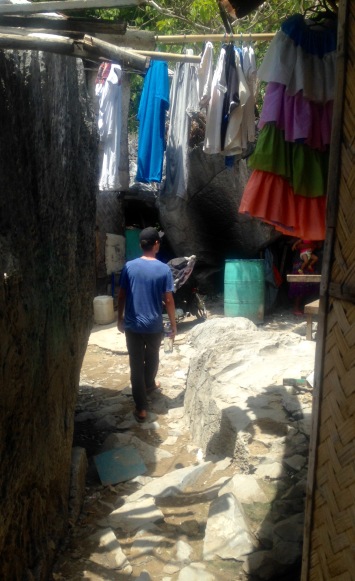 We followed some handmade signs out across a wooden bridge, between gaps in the rocks and past houses built into the cliff face, until eventually we came to the final building, and El Gordo. Who, in fact, was not a Latino bandit, but a Canadian. A friendly Canadian who offered multi-day kayaking trips around the Bacuit Bay archipelago. With food, drink, tents, expert guide all included, and the promise of avoiding the crowded routes of the official tours, we were sold. But the problem was, so was he; sold out for the next 4 days.

Disappointed to have missed out on El Gordo’s trip, we were pleased to find that our hostel offered a cheap combination trip of two island hopping tours, with a night’s beach camping in between. There are four island hopping routes through the archipelago: A, B, C and D. Tours B and D are, for some reason, completely sidelined, whilst Tours A and C are touted as the best ones by everyone from staff at our hostel, other travellers in El Nido, and travel blogs, to our friends who’d been in El Nido a few weeks before. Despite our curiosity about what exactly was wrong with B and D (and whether anyone had actually ever tried them before knocking them), we booked tours A and C, plus the camping trip, with Sophie and Henrik whom we’d met on the flight.

Bacuit Bay is a lot like Vietnam’s Halong Bay, with poker straight cliffs powering straight up out of the sea. Unlike Halong Bay, the karsts end with charcoal-coloured, spiky limestone dagger tips at the top, and begin with a tiny fringe of white sand at the base. Like something from Mordor had erupted from a tropical beach and been sprinkled with palm trees. These tiny beaches and coves are dotted all over the archipelago, but to protect the landscape, the four official tours each follow a set route. 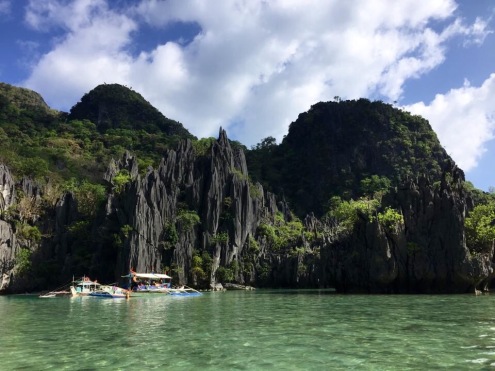 This meant that ‘hidden’ beach and ‘secret’ lagoon, reached by swimming through gaps in the rocks, were stunning, but far from secret. Cadlao Lagoon’s turquoise waters surrounded by the jagged cliff tips towering up from powder-soft sand was our favourite stop. It also helped that we arrived as the other boats were leaving so had it almost just to ourselves. One boat arrived that we were very happy to see, although we actually heard it before we saw it. A small bangka circled the lagoon, playing an ice cream van jingle from a speaker, selling ice creams and beers. 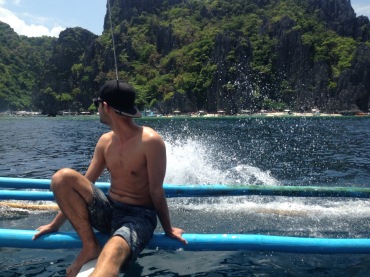 Between the snorkelling, coves, lagoons and beaches, we cruised around the archipelago in our half-full, blue and white bangka boat, watching the crew barbecue chicken skewers on the makeshift grill at the back of the boat, while sunbathing on the bamboo rails that run along the outside of the boat.

After five island hopping stops we were dropped at a small stretch of sand with the promise that the crew would return with some dinner and two tents. Sunset came and went, and as darkness began to fall we were wondering if we had the Bear Grylls skills to make ourselves a tent from a sarong and some flippers, the bangka appeared with our tents, some food and even a bottle of rum. 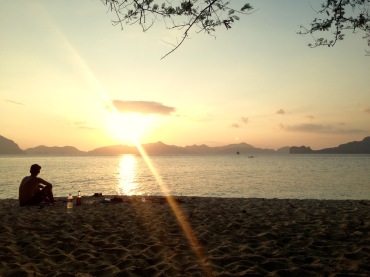 Waking up just metres from the sea felt like a true Castaway experience, though thankfully our survival skills remain untested.