Let’s be clear, hearing a man yell the name of your destination in the street, wandering over to him and agreeing to get on his boat doesn’t sound like great travel advice, but in Krabi that’s just how things work.

Our minivan from Ko Lanta had dropped us at the waterfront near the piers where longtails depart for Ko Phi Phi, Ao Nang, Ko Yao Yai, and Railay. Railay is actually further around the coast, rather than an island, but – thanks to the stunningly huge cliffs and dramatic headlands that make it a world-famous rock climbing destination – it’s completely cut-off by road and only accessible by boat from Krabi and Ao Nang. 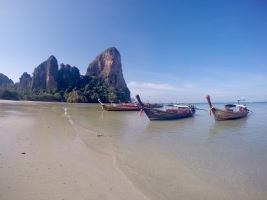 There aren’t scheduled departure times; boat captains only leave once they’ve rounded up at least 8 people. Enter Shouty Man, walking up and down the waterfront yelling “Railaaaaay!” to find his final two. We hopped on board (as much as you can hop anywhere with a 10kg backpack on – though heaving huge suitcases over the side looked even harder), and 40 minutes later were pulling up on the shores of Railay East beach.

The first thing we’d noticed when deciding where to book was the east-west price difference. East is a lot cheaper, but with good reason. Being east-facing, it’s a sunrise beach rather than a sunset beach – which is fine for early risers but, where cocktails are concerned, ‘sun-uppers’ doesn’t really have the same ring to it…

At high tide, Railay East is only a thin strip of sand. At low tide this strip of sand is separated from the sea by a stretch of tree-covered mud flats. Whilst that’s not exactly the picture-perfect Thai beach view, you are still surrounded by the impressive limestone cliffs and turquoise waters.

Over on Railay West (a 200m path separates the beaches between the resorts on each shore), the turquoise waters and limestone cliffs are accompanied by incredible sunsets, a perfect sweep of white sand… and about hundred other people. At first we were a bit overwhelmed by the number of day-trippers pouring off the constant stream of longtails, but the best thing about day-trippers is the ‘day’ part – by the middle of the afternoon they’d almost all gone and the perfect beach was much emptier and quieter.

Until the coast was (literally) clear, we hung out at our cabin, which turned out to be hidden away down a tree-lined path leading inland, so felt very far away from the crowds. There were just a few cabins set round a small pool with views of the limestone karsts peeping between the palms, where we tried to spot pro-climbers scaling the rockface. 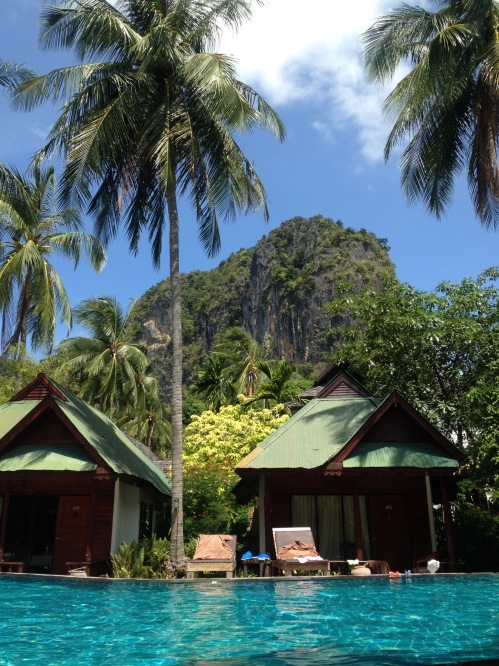 Railay is all about stunning Thai landscapes; white sand, crystal clear waters, impossibly steep cliffs powering straight up out of the sea.  It is less about traditional local food or culture. West beach has about four or five resorts, each with its own restaurant and beachfront seafood barbecue. Walking Street, the path connecting to East beach, has more budget options like convenience stores, and ice cream, kebab, pizza and pancake stalls.

We’d blown most of our budget to stay on West Beach, but a sunset dinner on the beach wasn’t off the cards; the backpacker version involves a takeaway pizza and grabbing the best sun loungers. After the day-trippers had made space for a beach football match, and the sun had raced an ominously black cloud to the horizon, we watched the very last longtail boat leave and the green lights of the squid fishing boats appear dotted along the horizon. 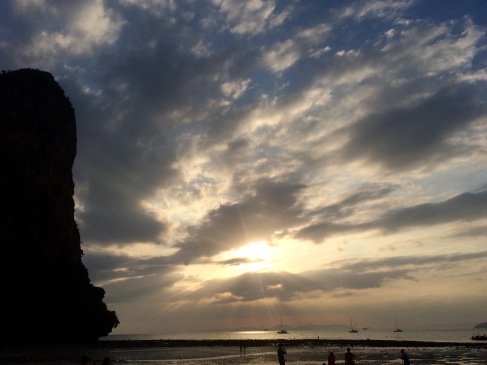 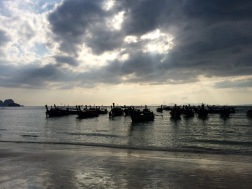 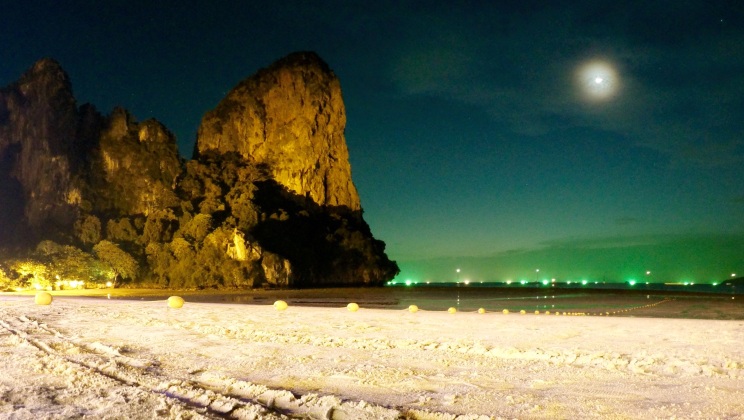 Two nights would have been ideal but, with only one, we had to pack a lot in. We got up early to catch the end of a sunrise on Railay East. People leaving that early (at low tide) were delivered to their longtail by a tractor ride out over the mudflats! Their luggage followed, piled high in a trailer.

Back on Railay West the beach was almost deserted. We sat down with a haul from the breakfast buffet to plan our day. The huge limestone karsts feature in most Railay activities; admiring them from the beach, from kayaks, from inside caves, or from up-close on the world-famous climbing routes. We divided our day between the first two. First up, some early morning kayaking where we found a completely deserted ‘secret’ beach just the other side of the headland. 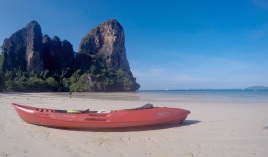 The rest of the day was beach time… 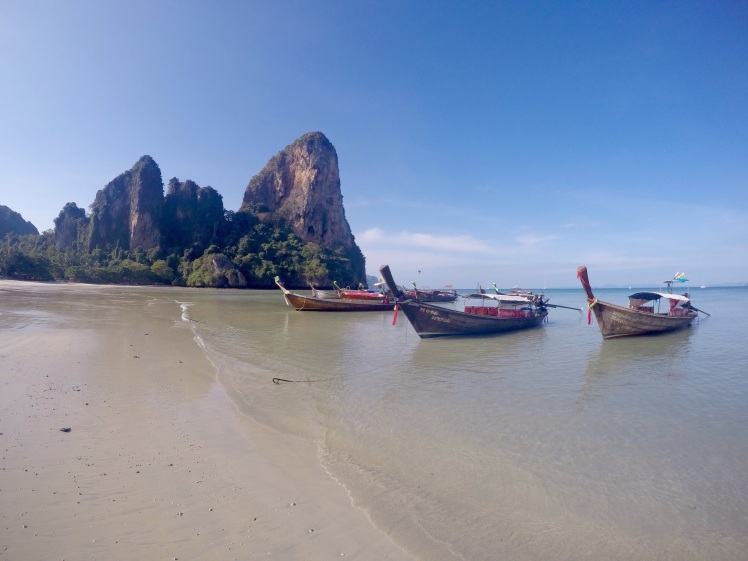 One thought on “Railay”