Choosing a Thai island is only difficult because the options are all so stupidly good. The fact that there are so many to choose between means there are lots of ‘Which Thai Island Am I?’ guides online, loads of blogs, and a whole Lonely Planet book dedicated to this (non-)problem. To make life even easier, there are plenty of cheap ferries and minivans between islands and beaches, meaning most people visit more than one place anyway.

Ko Lanta isn’t known as one of the crazy party islands, which was one of our reasons for choosing it. We wanted somewhere to relax, swim, and have a few drinks on the beach – just not the kind served in a bucket. It was the perfect place for a mini-holiday within our world trip; almost zero sightseeing to be done (or to miss out on if, like us, you don’t move from the same hammock-beach-bar-bed routine). 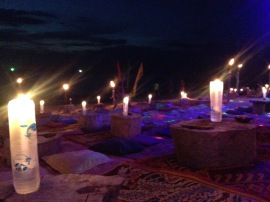 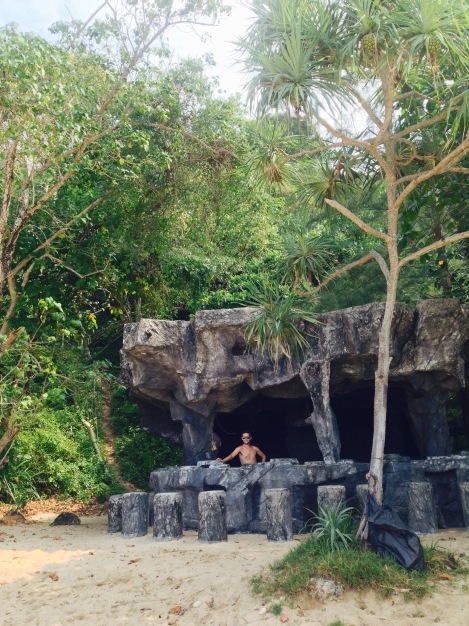 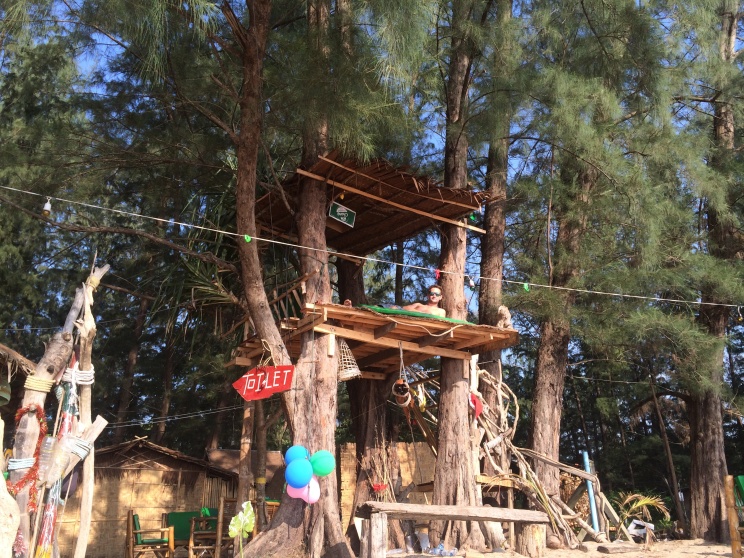 Another huge bonus we discovered was that, thanks to a local animal sanctuary, there are no stray dogs on the island. The sanctuary is open to visitors wanting to help take care of the animals, or even to chaperone them on a flight to a new home.

The island’s beaches stretch down the west coast, and are generally less developed the further south you go. We picked Khlong Khong, the third beach down. A ‘3’ on the Lanta Scale means budget beachside bungalows and ramshackle wooden bars, all decorated with colourful flags, DIY wind chimes made from coral washed up onto the beach, and multi-coloured lanterns that lit up the shoreline at night. 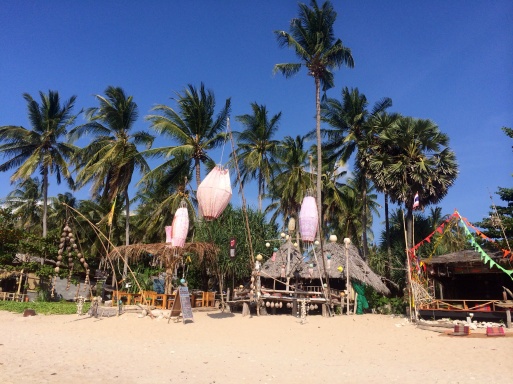 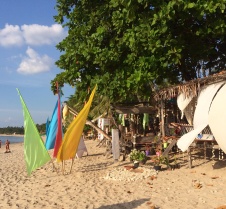 South Thailand definitely delivered on the the perfect beaches and blue seas we’d been looking forward to, but the view behind the beach wasn’t the neat row of tropical palms we’d expected. Instead, the jungle and dramatic limestone mountains (that make south Thailand feel like a giant grownup adventure playground) push all the way to the coast.

Whilst the imposing rocks and jungle are a stunning part of Thailand’s coastline view, one thing which initially detracts from the potential postcard beauty of Khlong Khong is the rocks that are revealed at low tide. We even considered moving beaches for the second half of our Ko Lanta stay, but after an afternoon of sitting in the warm pools between the rocks, seeing the unspoilt sweep of sand when the tide came in, and the coloured lights spring up in the bar-shacks behind us, as we watched the red sun set over Ko Phi Phi in the distance, we were convinced to stay. And then extended by a couple of days. 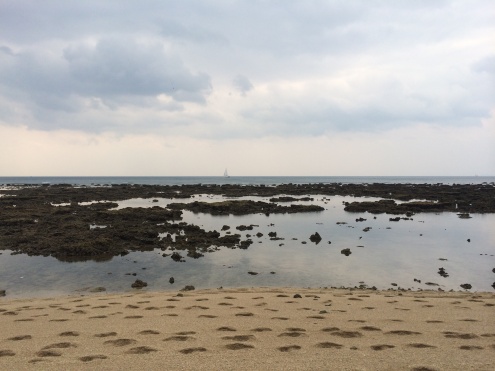 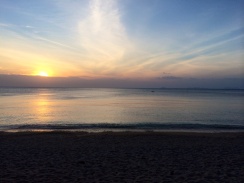 Whilst drinks come with a relaxed setting, and mostly good music (you know you’ve heard a few too many reggae covers when they start playing reggae covers of Bob Marley), the cocktail and food options were fairly basic on Khlong Khong. Of course you can still find a decent pad thai on the street behind for 100THB, but a good strategy for finding the best Thai food here is to head for the cookery schools; Kwan’s on Khlong Kong had the best fried yellow curry we’ve eaten – the hint of Indian spices made a world of difference. The guys running our beach bungalows had leased out their beach-front space to Spiros from Athens, whose Greek Taverna made delicious, and huge, portions of souvlaki, moussaka, and tzatziki as well as freshly-baked pitta and imported feta. 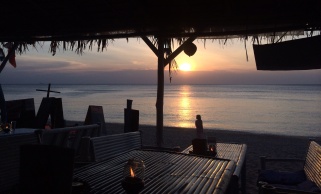 Whether you choose busy Khlong Dao as a base, or near-deserted Ao Nui beach further south, it’s very easy to have a change of pace for an afternoon and visit the others. 24-hour scooter rental is cheap (200THB) and the island isn’t big; scooting from the first beach to the last along the western coast didn’t take us more than an hour.

We went to Khlong Dao, the most developed beach and furthest north, for food as some of the best restaurants are here. Again, we headed for a cookery school, Time For Lime, where we had the tasting menu. The spring rolls, massaman curry, spicy soup and turmeric chicken were all really good, but the highlight was a desert that was, at last, neither mango sticky rice nor coconut bananas; a sharp and tangy tamarind mousse. The downside of this beach is that, at high tide, the water level come all the way up to the resorts, bars, and restaurants leaving very little sand space.

Phra Ae (also called Long Beach, for obvious reasons) has the nicest sand of the northern beaches but it comes with a pricetag, which in turn means less of a beach bum feeling, and more of a ‘proper’ restaurants and orderly rows of sun loungers scene. It’s still more developed than Khlong Khong beach, though, so the late night bars and clubs were mainly around here.

Ao Nui is Ko Lanta’s ‘secret’ beach. As you continue south past the long and thin Khlong Nin beach, the road starts to hit the hills. Rebecca found out the hard way that cheap scooters need a bit of a run up to get two people up the steeper climbs, and that, unfortunately, it’s not an option for the driver to get off and walk. At the top of the 3rd or 4th steep climb we saw a few scooters parked by the side of the road concealing a steep path behind. We parked up, and climbed down to find a beautiful little bay with just one rickety beach cafe with a tiny sea-view massage shack attached. 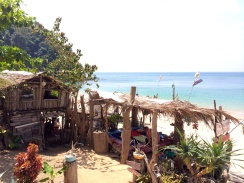 Kan Tiang has the best sand on the island, in our opinion, but it felt oddly like the water was colder – maybe the rocks in the shallow waters at Khlong Khong had something to do with keeping the water there at bath temperatures? There isn’t much development here, other than the small Same Same But Different cafe right on the beach and an expensive resort behind – golf buggies shuttle guests across the road from the pool on one side to the beach on the other! People that don’t arrive by scooter or resort buggy, seem to arrive by yacht, judging by the handful parked up in the bay.

Bamboo beach is the last beach you get to before heading into the national park. Other than a few bungalows springing up amongst the trees, and a beachfront cafe doing good business in ice cream, there’s little else, and even fewer people, on Bamboo beach. The fact that tuk tuks can’t make it up the steep roads helps. Beyond Bamboo beach, there’s just one left, inside the national park. Put off by the entry fee and the fact that we’d have to share the beach with monkeys, we gave that a miss and headed to the east coast. 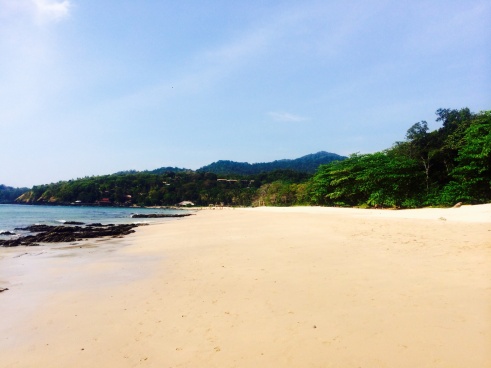 There is one small town on the eastern side of the island, which doesn’t seem to have any name other than ‘Old Town‘. It’s a good place to come for lunch, and we spent a couple of hours wandering between the wooden shops and cafes that have a kind of Wild West shopfront feel to them. 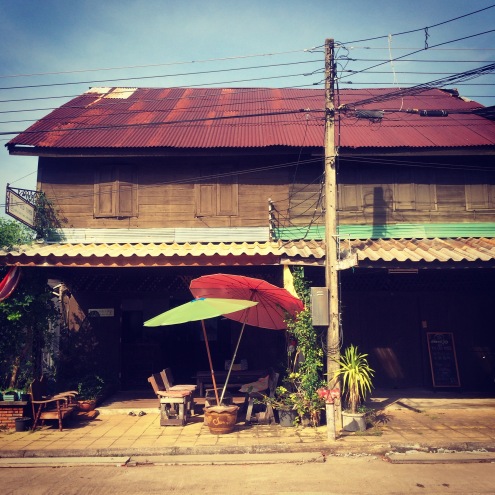 We arrived and left by the Krabi-Ko Lanta minivan for £6 each way (all journeys seem to cost about 300 Baht and take about 3 hours in southern Thailand), which gets onto the island via two short car ferries. It’s not quicker than the passenger ferry direct from Ko Lanta pier, but it will take you directly to your beach bungalow.

Our plan had been to do an overnight trip to Ko Rok, a tiny uninhabited island south of Ko Lanta. We’d booked to camp on the island (it’s illegal to build on the island, so no hotels or bungalows), however due to high winds our boat was postponed by 1 day, before being cancelled altogether leaving us to only imagine what it would have been like. But we’ll definitely be back to find out in the future.