During our stay in Bangalore we were lucky enough to tick off a major travel bucket list item and attend an Indian wedding. It lasted for four of our nine days in the city and was a relatively “small” wedding with about 500 people at the biggest function.

The Mehendi
First up was the Mehendi. This was hosted by the family of the bride, Divya, at The Bangalore Club. This is a Bangalorean institution where apparently there is a 30+ year waiting list for new members, and Winston Churchill still has an unpaid bar tab from his last visit!

The pretty walled garden was decorated with swathes of bright yellow and orange material and strung with marigold garlands. All guests are invited, but the main purpose is a kind of beauty and pampering afternoon for the bride and all female guests to prepare for the wedding. The Mehendi is the function where women get their henna artwork done (henna is the name of the herbal dye, but Mehendi refers to using henna for body art). The henna was the main event but there were also baskets of pampering gifts like bangles, nail varnish, hair garlands and lipsticks. A bit like pre-wedding favours just for the girls.

The most elaborate design is reserved for the bride; Divya had an amazing intricate pattern reaching from her fingertips up to her elbows. The henna artist traditionally hides the groom’s name in the design. The idea is that he has to find each letter on the wedding night. Could make for a pretty awkward conversation if the henna artist misheard his name… 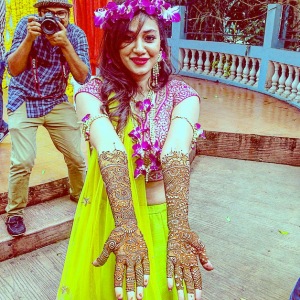 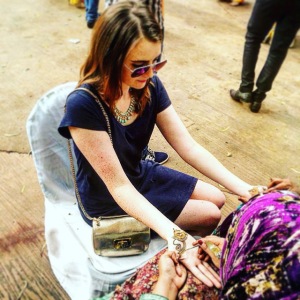 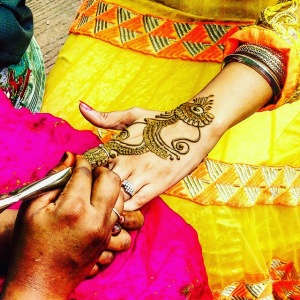 The Sangeet
The evening dance party was our favourite function of the whole wedding. Everyone close to the bride and groom performed in group Bollywood dances – including cameo appearances in two dances from us!

It was the performances and the dance practices leading up to the Sangeet that were the most memorable parts of the wedding.

Two evenings before the Sangeet the groom, Karan, opened up his flat as a drop-in dance studio. A friend of a friend choreographer was hired and she patiently took about twenty people through six dance routines late into the night. Two days in a row.

It was an extra bonus to be a part of this ‘back stage’ part of the wedding. The atmosphere in the flat was so much fun. The Bollywood beats were being drowned out by the laughter of friends learning the steps together, friends who’d flown in from London, Dubai and Sydney excitedly catching up and friends from the bride and groom’s sides getting the chance to meet and get to know each other before the actual wedding.

Some people were clearly seasoned Sangeet performers with a lot of Indian weddings under their belt and had no problem remembering four or more dances. Rebecca’s Bollywood debut went pretty well; not only did she avoid causing a mass pile-up on stage, but also remembered most of the steps in roughly the right order. 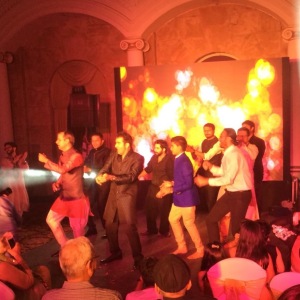 We were both in the final dance which was to a Bollywood remix of a Pitbull song. This was the very last song we learnt, well past midnight on day two of rehearsals. Thankfully, after we’d mastered half the steps, the choreographer gave in to the whole group’s pleading for “now we just freestyle!?” for the rest of the song.

The bride and groom were at the front with all twenty of us behind them… you could feel the excitement building as we got to the final few choreographed steps, and the explosion of twirling and flailing limbs behind the couple as the ‘freestyle’ began set the dance floor up for the rest of the night.

The Gurudwara
This was really the most important function as it was the actual wedding ceremony in the Gurudwara temple. In true style of Indian stamina for partying, this happened at 10am the morning following the 4am finish of the Sangeet.

Waking up at 8am was not the best wake up call of the trip, but we were in no position to feel sorry for ourselves as Divya had been up since 4:30am for another ceremony: the Chooda. This is kind of the equivalent to the bouquet toss in weddings at home.

During the Chooda the bride puts bangles on each wrist that she’ll wear for the next 42 days. All of her unmarried sisters and cousins tie gold bells, kaleriyan, to the bangles. She walks around jingling the bangles and the first girl to have a kaleriyan fall on her head will be the next to marry.

We were expecting a quieter start to this function, but when we arrived at the Gurudwara we arrived right into the middle of a raucous street party! The wedding guests collect the bride and bring her to the temple in a procession through the streets holding up the traffic with drumming and dancing all the way to the temple steps. 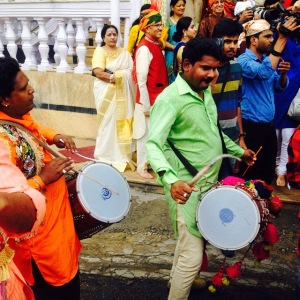 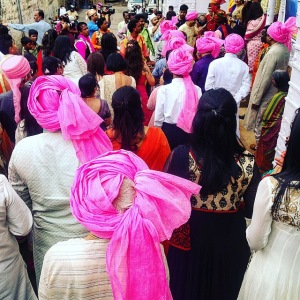 When the groom arrived at the temple several women made a dive for his feet. We were confused at first, but soon found out that it’s traditional for the bride’s friends to steal the groom’s shoes so that his friends have to pay them to get them back.

As Karan stepped out of the car it was his own friends grabbing his shoes in a double bluff so that Divya’s friends would have nothing to steal and their money would stay in their wallets. Cunning. The shoes were passed from person to person (us included) until nobody was sure who was stealing from who anymore and a kind Uncle gave in and handed over the ransom money to Divya’s sister. 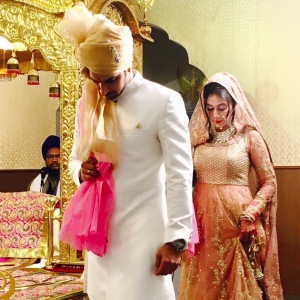 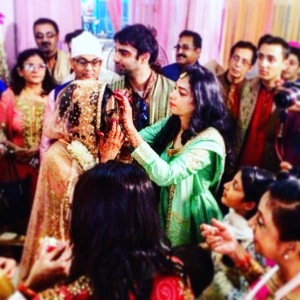 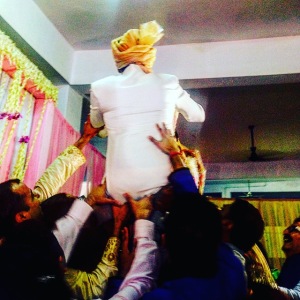 Now that they were officially married there was just one function left. The reception was later that evening so everyone went home for a power nap and an outfit change.

The Reception
After three days of partying the reception was the biggest event, and also the most formal. It took up two huge rooms of the beautiful Leela Hotel and was basically an open invite for all guests to drop in to wish the bride and groom good luck in married life and reminisce with each other about the last four days of wedding fun.

The bride and groom spent the evening on a stage receiving a seemingly never-ending line of guests and gifts. When every guest had had their time, and formal photograph taken, with the couple, Divya and Karan could finally leave the stage and went for a private dinner with their family. Timian began the process of consoling Rebecca that she would not be wearing another sari tomorrow.

Aside from the excitement of a four-day party and ticking off such a big travel bucket list item, being a part of the wedding let us meet loads of local Bangaloreans, see some of the city’s most beautiful venues and try out a whole new wardrobe of beautiful Indian clothes and accessories. 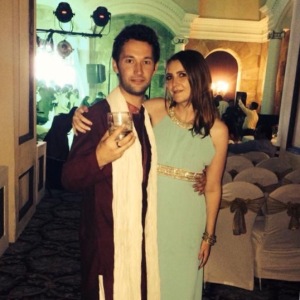 Each function had a different purpose, but the food was just as important at each one. There was always an adjoining room with a huge buffet, even at dance practice!

It was at these buffets that we learnt the key to Indian small talk. Instead of “how are you?“, all chats were kicked off with “have you eaten?” We quickly realised that, as in the UK where the default answer is “Fine, thanks. You?“, the default answer here is at all times “Yes!“. Making the mistake of saying “no not yet” was met with a look of horror on well meaning aunties’ faces who immediately marched us to the buffet, watching until our plates were piled high enough for their approval.

Whilst there were a lot of obvious differences between this wedding and ones back home, the main thing that struck us was how involved the families and friends were from start to finish. From dancers to drummers to shoe detectives, there was a role for everyone who wanted it and that made rooms with hundreds of people still feel like a party of close friends. 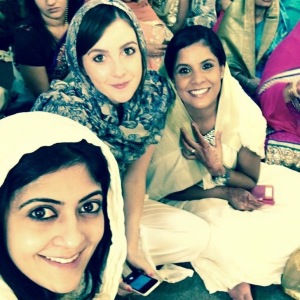 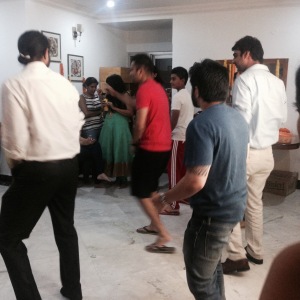 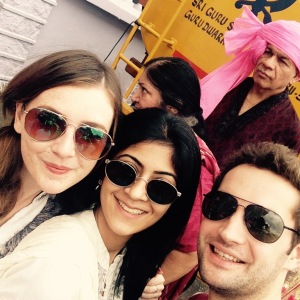 3 thoughts on “The Indian Wedding”