“Onegai shimasu” is an expression you’ll hear a lot in Japan. It mostly seems to be used as ‘please’ or to express good will to another person. It literally translates as ‘I am in your care’.

Cared for is exactly how you feel in Japan. From the traffic controller waiting on the quietest street corner ready to signal you to safety with his flag and whistle should a car happen to come, or the chorus of “Irasshaimase” (‘welcome’) reverberating at top volume around the restaurant from every single server when you enter, to the train ticket inspector who greets the whole carriage with a low bow, or the friendly passers-by who stop you in the street just to check you know where you are going, everyone seems to be looking out for you.

Osaka is known as the food capital of Japan and the streets along the Dotonbori canal in Namba did not disappoint. We’d picked a good time to visit: it was Silver Week (one of Japan’s 20 annual public holidays) with days off in honour of Respecting the Aged and the Autumn Equinox. The streets were packed, with hundreds of tiny bars and restaurants lining both sides of the street and tempting food stalls set up in front. The whole length of the street had a crazy mish-mash of neon-lit signs, just like you imagine in a Japanese city at night. 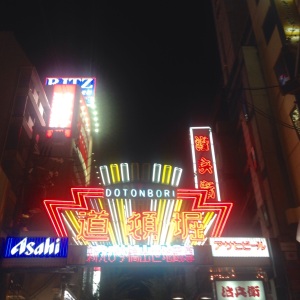 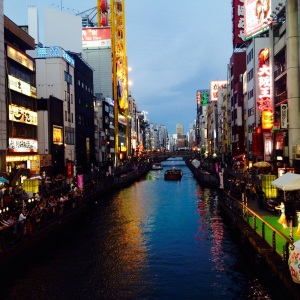 Whilst back at home any restaurant with pictures on their menu is usually the equivalent of a big Do Not Eat Here sign above the door, in Japan it’s no bad thing at all. In fact, it’s commonplace and they go way beyond just pictures. Most places have some quite pretty scale models of the dishes in their windows. Well, the models of sushi bento boxes look pretty. The plastic spag bol outside some Italian restaurants, not so much. 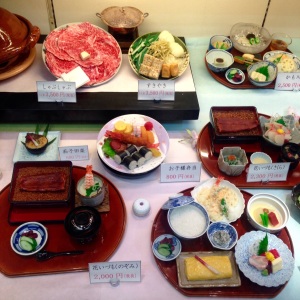 We got stuck into some Dotonbori street food and took our feast of Yakitori (chicken skewers), Takoyaki (fried octopus in pancake batter balls) and Wagyu beef croquettes to eat canal-side for some people watching. In search of a nightcap we took the plunge with one of the tiny bars. Seriously, tiny: this bar owner had carved himself out a 3x1m slither. We slotted into the 1-person deep space in front of the bar alongside four other people and, that was it, the bar was at capacity.

On realising we were from the UK, the barman didn’t miss a beat before yelling “The Beatles!!” and, skipping straight past classics like Hey Jude or Penny Lane, launched straight into his rendition of the instrumental intro to Come Together. All the while with a huge grin and some funky moves. The other customers were enjoying the show as much as we were and kept telling us he was a Japanese comedian. We were in no doubt, he had us in stitches. But then he pointed to the photographs above the bar – headshots with his catchphrase “take it easy” printed on them – and it seems he actually was a TV comedian in the 70s or so. 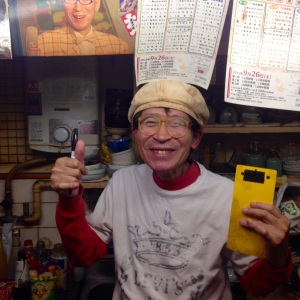 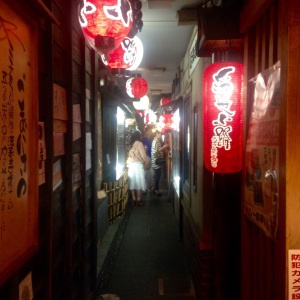 A few more Beatles songs and sakes later we headed back to the hostel. From its Brooklyn loft style common areas and artfully illustrated neighbourhood maps, to the calligraphy wallpaper and tatami mat bedrooms complete with paper screen windows, futons and tea tables, Hostel 64 is just asking to be Instagrammed. Even the bathrooms deserve a mention with the pixie-sized doorway and toilet with more buttons and functions than most TV remotes. 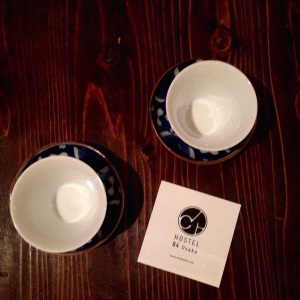 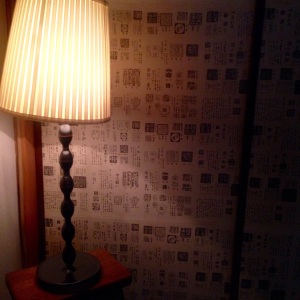 The hostel offered daily bike rental for just 200 Yen (just over £1) and lots of local tips in their own digital guide. Our favourite section was the staff’s own recommendations and favourite neighbourhoods. We took them up on their suggestion to eat Spice Curry whilst in Osaka. Doesn’t sound very Japanese? Apparently it’s a new trend that’s popped up in Osaka and is already very popular. Yobareya came recommended and was just around the corner. Again, the decor was an Insta-friendly pared back style with a pared back menu to match. They only do Spice Curry, but they do it very, very well. 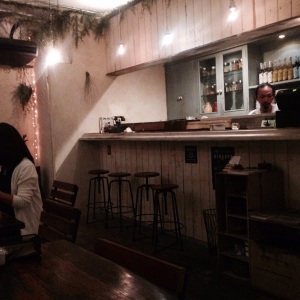 We’d bought a 7-day Japan Rail Pass with the idea of using it on the Shinkansen to get between cities, but it can also be used on local JR lines within the cities. The Osaka Loop Line took us from the airport to the JR Namba station and deposited us into a gigantic underground shopping centre. You can walk for blocks and blocks underground through these malls and, given how far across the city you can get, it can sometimes be a better option to go underground for the air-conditioning, better signposting, and plethora of snack opportunities. Only when you emerge above ground again do you realise how many more people and how much more activity is going on beneath your feet than on the pavements!

Namba is one of the two main city centres, at the southern end of the JR Osaka Loop Line. The main shopping district of Umeda is the other, and is by the main Osaka station at the northern end of the loop. If Namba is the where Osakans eat out, Umeda is where they shop. A lot. We were more interested in filling our bellies than backpacks so spent more time in Namba.

Although we were on our way to the historical capital of Kyoto, we took a brief break from stuffing our faces to visit some of Osaka’s temples and shrines. Once we’d worked out the ritual of washing your hands and bowing before entering a temple, we ventured inside the gold-clad interior of the Ishiyama Honganji temple where we were experienced the hypnotic hum of chanting monks.

We left Osaka for Kyoto by bullet train. The Shinkansen took all of 15 minutes from one city to the other. You can get all the way to Kyoto by local JR train from Osaka, but it takes much longer. Though the time that we saved was cancelled out by our insistence on using our JR rail passes to get across the city to the Shinkansen station on the loop line, rather than the subway. The swish Shinkansen trains, with on-board wifi and 320kph speeds were worth it, though.

One thought on “Osaka”