The smog cleared, the skies brightened, and our sore throats recovered. And our wallets emptied. Welcome to Shanghai.

After just a short 4 hour high speed train from Beijing, this felt like an entirely different country. For one, we no longer stood out in a city where 9 out of 23 million inhabitants are not locals.

Narrow hutongs and dynastic buildings gave way to fast cars and futuristic skyscrapers. The prices also went through the roof.

We found this out the hard way. Trip Advisor’s not-so-hidden gem was a rooftop bar of a hostel which promised cheap drinks and a great view of the Bund. Timian parted with about £6 for drain water, sorry, a Carlsberg, but they didn’t lie about the view. We had front row seats for Shanghai’s famous skyline lighting up. Further up the Bund, we found cocktails at another rooftop bar for a similar price and no less impressive view. 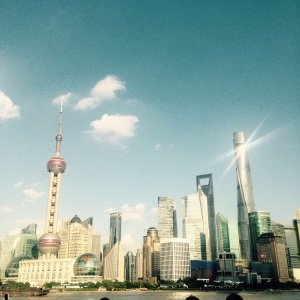 We wandered onto the Bund, which is actually the row of early 1900s Art Deco trading powerhouses on the Puxi side of the river. In the past the city’s wealth, as a world trade hub, came from silk, tea and opium. These grand older buildings are now completely dwarfed by the skyscrapers of the new financial powerhouses on the Pudong side of the river. It’s hard to believe that they only started building here in the 90s. Apparently China has used more concrete in 3 years than the USA has in a century. In Shanghai it’s been poured into what looks like a very 90s fantasy of the future. Thunderbird 1, Pineapple Party Hat, the bottle opener, a Jetsons-style UFO, some sort of intergalactic syringe needle thing and the second tallest building in the world all looked down on us from across the river, lit up in mad colours and covered in LED TVs the size of tennis courts.

Then, promptly, as if with the flick of one central switch, they went off at 10.30pm. Word to the wise: don’t use skyscrapers for navigating your way through Shanghai late at night.

There aren’t many bridges across the river in the downtown area but several of the subway lines connect the two sides underground. The subway’s cheap at just 3 Yuan (30p) to get across the river, but if you feel like splashing out a whole 50 Yuan, there is another way. The Sight-Seeing Tunnel is a bonkers ride through a Willy Wonka-esque neon-lit tunnel. 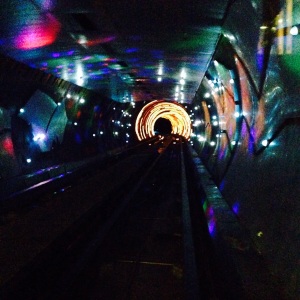 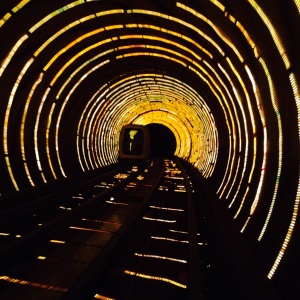 We took this tunnel once (once really is enough) over to Pudong for an evening of bird’s eye views of the city. The newest building – the tallest in Shanghai and second tallest in the world – doesn’t yet have residents, so the highest look-out point is the observation deck on the 100th floor of the Bottle Opener building just next door. To avoid the growing tour group queues and 110+ Yuan fee, we went up to the Hyatt bar on the 91st floor and had some pretty stunning views over the city. 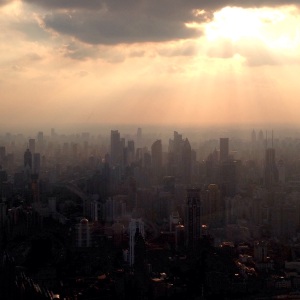 The impressive skyline is matched by the immaculate style of Shanghaians. Hardly surprising when every other shop is Cartier, Rolex, or Prada.

Our hostel was just behind People’s Square and perfectly placed for reaching The Bund, the French Concession and the Old Town all on foot. And just around the corner was Huanghe food street where we had the Shanghai speciality of dumplings with a shot of broth in with the filling. We got Shepherd’s Purse vegetarian dumplings at Yang’s and took them over to People’s Park to eat in the sunshine.

Finding a spot to eat them proved tricky at first as the corner of the park we’d chosen was completely packed. First we thought it was a market, but there didn’t seem to be any stalls. The paths were lined with umbrellas each with a notice pinned to the front. Maybe a protest? But everyone seemed to be milling about quite happily. Then we realised it was in fact a market, of sorts. The Shanghai marriage market! Everyone was aged about 50-60 and were there with adverts for their eligible children! 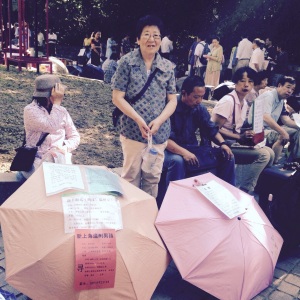 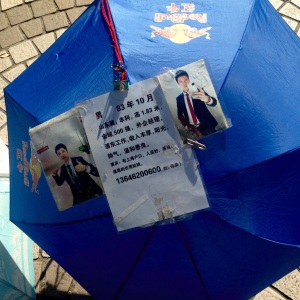 On People’s Square itself is the Shanghai Museum. Whilst we’d read that the majority of Chinese museums are not that foreigner-friendly, being poorly lit with exhibit descriptions of never-ending strings of incomprehensible nouns, Shanghai Museum was apparently a cut above the others and worth doing. There was an interesting exhibit on ancient Chinese money used on the Silk Road, the obligatory Ming vases and some beautiful calligraphy, but the lighting was more suited to a Nocturnal House at the zoo so after a while we headed back into the sunshine. The furniture gallery was interesting, mostly as it highlighted the tendency for restoration of old pieces which in the UK would likely have been left as they were. Qing Dynasty furniture was labeled as from any time between 1600 and 1911 but looked brand new. 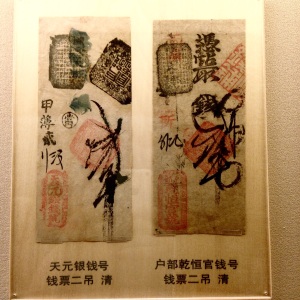 Walking to the French Concession that evening the parks were again packed with people. This time with waltzing couples. Apparently somebody brings a stereo and people just couple up and join in.

The French Concession was one of our favourite spots in Shanghai. It was owned by the French government until 1943 and throughout the 20th Century was the premier shopping and retail district of the city. Now the tree-lined streets are home to great Szechuanese restaurants and lots of bars. Behind these streets outdoor seating of these restaurants and bars spill out into bustling squares that feel more like Italian piazzas. 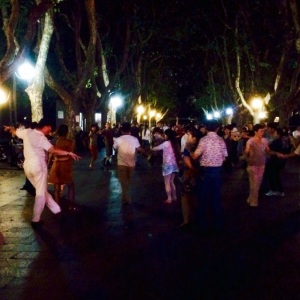 The Old Town, as you’d expect, shows a different side of the city to the new skyscrapers and shopping malls. Middle Fangbang Road is lined with small one-storey shops, tea rooms, and traditional curved roofs. We stopped at Old Shanghai Teahouse on the way back up to the river, and had a not-so-authentic experience when, after the hostess had immaculately delivered the tea service and daintily poured the first glass, the hapless-go-lucky trainee waiter shows up and proceeds to pick up each item and then pour most of the tea onto the table. With a look of complete incredulous disbelief as he does so. Baffled, he shrugged and left us to our tea and the traditional live music. 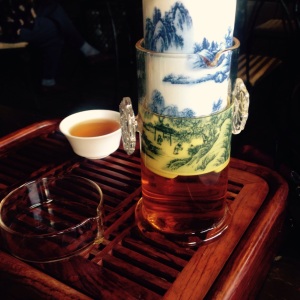 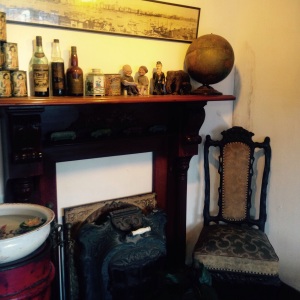 Shanghai is home to the fastest train in the world, the MagLev. This train levitates just above the tracks by magnetic force and runs between the airport and the end of a subway line in the city. Sadly, our 5am departure from the hostel meant it was too early to take the MagLev. Arriving at the airport we were mainly just relieved that the airline did in fact exist and our flight was there, after the website returning the dreaded 404 page and our hostel receptionist telling us “oh no, that is not a heard of airline…” 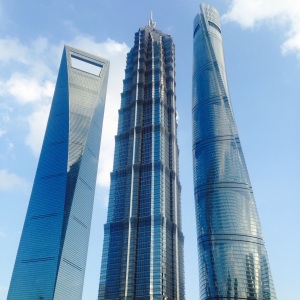 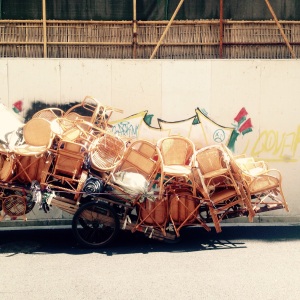