The combination of an absolute nest of an Airbnb, meeting up with friends, zipping about on the tube and in Ubers, and doing some ‘normal’ non-travel things, made Santiago unexpectedly feel like a home from home.

Still adjusting to winter, the appearance of heating, fleecy blankets and Netflix in our little apartment meant any sightseeing immediately went out the window on our first evening and we settled in to make fajitas, pick a series to binge-watch and drink our souvenir from the Casablanca vineyard we’d stopped at on the way from Valparaiso.

After more episodes than we’re prepared to admit, we did venture out to explore, starting with Lastarria, right on our doorstep. Our Airbnb host told us we’d find a bohemian neighbourhood filled with cafes, bars, and quirky boutiques. Whilst the cafes seemed cosy by day, the bars lively by night, and the side alleys and squares were home to craft stalls and food carts, it seemed that the off-beat reputation had morphed into a glossier, posher version of bohemia. We thought that (aside from the busy but touristy restaurants in Patio Bellavista), the Bellavista neighbourhood was more deserving of the bohemian crown with its colourful houses, street murals, an independent cinema, comic shop and craft brewery. Further west, beyond the palm-filled Plaza de Armas and the seafood Mecca of Mercado Central, Barrio Brasil also had its share of small ‘menu del dia’ cafes, decorated streets, and jugglers practising in Plaza Brasil park. 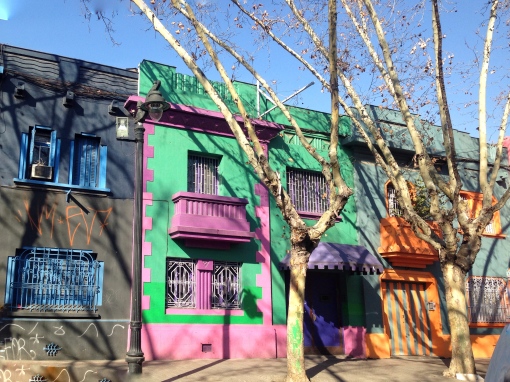 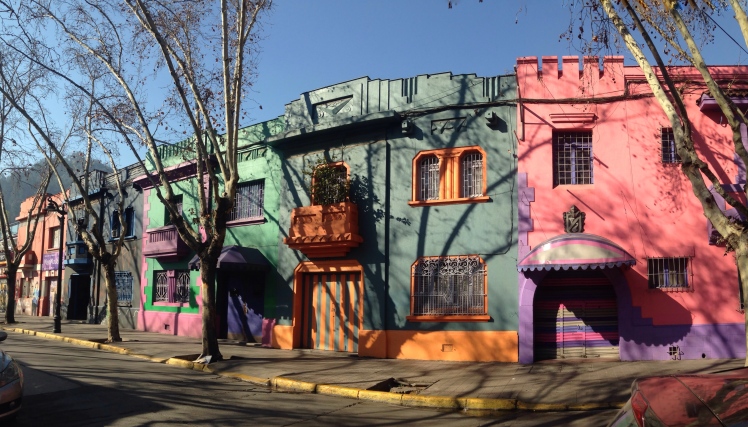 We spent most of one day walking from Plaza Brasil, along the river to the market where we joined an impressively long queue for some freshly-baked empanadas, around Bellavista’s colourful streets stopping to sit in the sunshine with a craft beer tasting selection, along the river through Parque Forrestal, and into Lastarria for ice cream, an incredible waffle sandwich concoction from a food cart, and for Timian’s bushy backpacker beard to undergo the full hipster beard treatment involving a cut-throat razor shave, scented beard oil and a full head wrap with hot towels… whilst Rebecca played Spot The Biggest Moustache from the waiting room sofa. For over an hour. 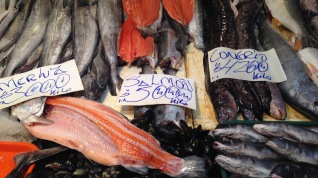 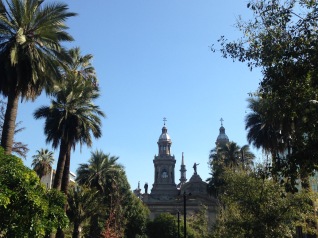 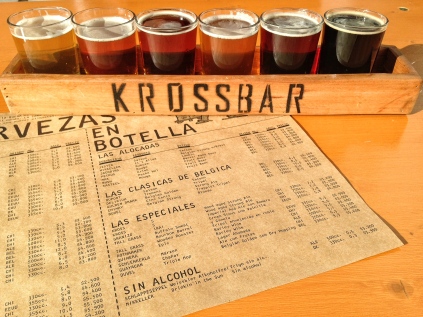 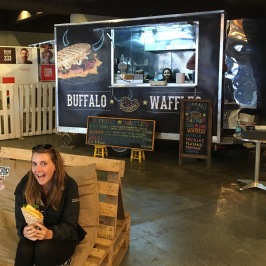 Also in Lastarria we found Bocanariz; a bar with its own wine cellar offering over 400 Chilean wines. You could order any by the bottle or the glass, but we went for their themed tasting flights – themed by region, style or type of production – of three glasses filled 1/3 each. Flights flighted, we Uber’d our way to our friend Alejandra’s apartment for a barbecue on her balcony. Here we were introduced to the Chilean bbq staple of Asado Americano cuts of beef, homemade pisco sours and some Chilean rock music.

At this point we realised that both Chile and Peru claim pisco sours as their national drink, so of course we had to compare Santiago sours to the Peruvian piscos we’d had a few weeks before in Lima. We think the Asado Americano cut was a mix of neck and sirloin… but due to our pisco comparisons, that memory may not be entirely accurate. But either way, it was delicious.

There were a lot of familiar-feeling things about Santiago (haircuts, home-cooking, house parties), but the stunning view of the snow-topped Andes, an imposing backdrop to all views east, was nothing like home. The roof terrace of our apartment block had a great view, but just across the road Cerro Santa Lucia had even better. The small but steep hill, amongst the city centre high rises, has a leafy park on top with perfect views out across the city to the mountains. Without knowing much about the city before we arrived it was a nice surprise to find somewhere on the other side of the world that felt so similar to home.

One thought on “Santiago”