We’d seen the iconic image of the Inca mountain city, surrounded on all sides by impossibly high peaks, many times, but it wasn’t until we were up there ourselves that we realised just how baffling it is that the Incas chose to build here at all. It’s no surprise that for centuries of Spanish rule, none of the conquistadors ever discovered the site; really, who would squint up at the towering mountain range, several days’ trek away, and think ‘yup, I bet there’s a city up there’.

Well, Hiram Bingham, that’s who. It wasn’t until 1921 that the American explorer discovered the overgrown ruins, with the help of an 11 year old local boy – the site had been an open secret amongst the local people for years. The Incas had to transport everything – all the stones, their tools, even the topsoil – to the mountaintop. We read that they didn’t even use wheels for this, although excavated children’s toys showed they did know how to make them.

This was at a time when the four day Inca Trail wasn’t a badge of honour for uber-trekkers, but simply the way. The only way; no trains from Cusco, no buses up the mountainside, no porters sprinting ahead to put up tents and prepare dinner. In 2016 there are trains from Cusco and buses to the top. We took advantage of both. 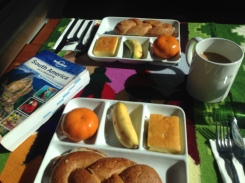 The Vistadome train left from Poroy (20 minutes outside Cusco) and took us through wide plains surrounded by mountains, down the steep descent into the Sacred Valley of the Incas on an ingenious back and forth zig-zag track, and finally into the cloud forest jungle that leads into Aguas Calientes, the town at the foot of Machu Picchu.

The train´s huge windows and glass roof meant we could make the most of the changing scenery, with a backing track of Peruvian huayno music (think Simon & Garfunkel’s El Condor Pasa) and sometimes commentary explaining the things we passed; the ruins of the Inca settlement Ollantaytambo, the 3 see-through pods that make up Skylodge hotel, suspended 400ft from a sheer rock face, the bespectacled bears we didn’t manage to spot, and at km88 the start of the Inca Trail. It was strange to whizz past the trekkers starting out on the path knowing that it would be another four days before they arrived where we would be that afternoon. 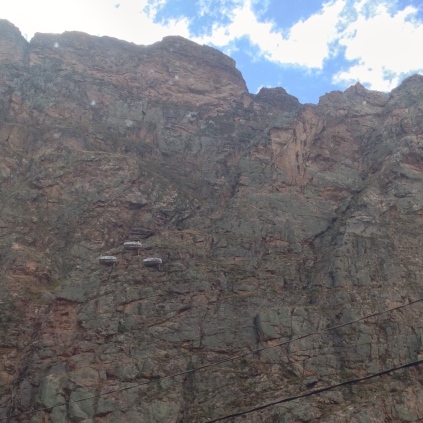 Aguas Calientes is really just a necessary evil for the brilliance of Machu Picchu. That may be a bit harsh, it’s not that bad. It’s just not that great. The small town at the foot of the mountain exists solely for the thousands of visitors spending just one or two nights here. We´d been debating the traditional pre-dawn alarm call that gets you up to Machu Picchu for sunrise. We´d heard plenty of stories of how absolutely worth it this is, but also a few accounts of the mountaintop view being obstructed by both crowds and clouds until later in the day. All of Aguas Calientes is geared up for the sunrise crew; breakfasts begin at 5am, buses start at 5:30am, overheard dinner conversations revolved around alarm clock oneupmanship and survivor stories of the bus queue. In the end we decided to suck up the 4:30am alarm, wolf down breakfast and be in the bus queue as close to 5am as we could. We were on a bus by 6am. A podcast had distracted us from the hour in the queue and the sheer drops down to the valley below as the bus made its way up the mountain.

Once past the touting tour guides and through the security checks, the crowds dispersed as everyone marched off to find a prime spot for sunrise. We were following the advice from someone we´d met on the train; a father taking his family for their 10th visit to Machu Picchu! His tip was to head straight up to the Guard House. This is where the iconic MP shots are taken and was the perfect vantage point from which to watch the sun break over the horizon and spread down over the ruins. Luckily, the skies were completely clear, not a cloud in sight. We got a few good photos but an American couple next to us had thought ahead and set up their GoPro to film a time lapse of the whole sunrise – which they handily posted to Twitter afterwards. 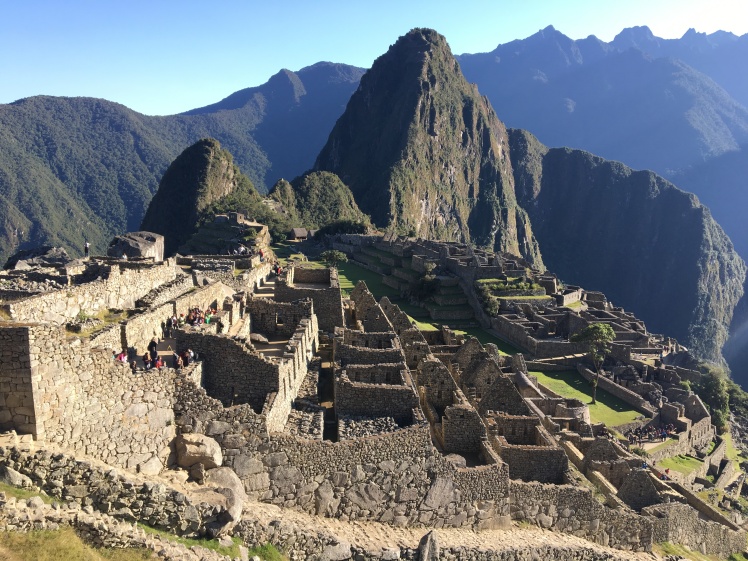 After sunrise we explored the rest of the ruins. Highlights were the Temple of the Sun, Temple of the Condor and the view out across the mountains from the ruins of the Observatory. We hadn´t hired a guide but managed to pick up a few theories as we passed different tour groups. We´d read online that due to the lack of documentation from the Inca´s time at Machu Picchu, many explanations are often “imaginative hearsay.” Most guides seemed to have the same spiel for the Temple of the Condor, though. Inca stonemasons shaped the rock formation into the spread wings of a condor and placed their dead in the gap between the wings as they believed these birds transported people to the next life.

Not only was the city built in an impossibly inaccessible place, it also sits on a narrow platteau between Machu Picchu (´old mountain´) and Wayna Picchu (´young mountain´), and alongside two fault lines making it very vulnerable to earthquakes. No worries for the Incas, whose building technique of fitting together perfectly tessellating stones ensured the buildings withstood the tremors. 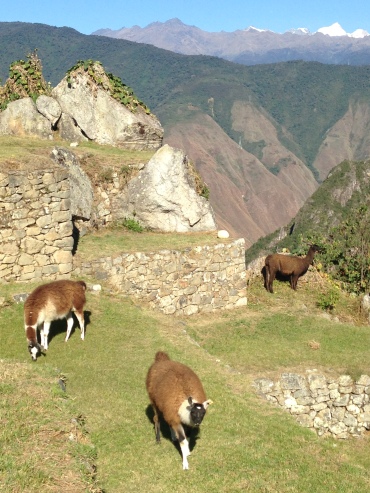 After exploring the ruins we snapped a few llama selfies, headed back up to the Guard Hut for more pictures in ´the spot´ now that the sun was completely up, began the walk along the Inca Drawbridge cliff face (but swiftly u-turned when our vertigo kicked in) and after one final circuit of the main city, got the novelty passport stamp and boarded the bus for the descent back into Aguas Calientes. 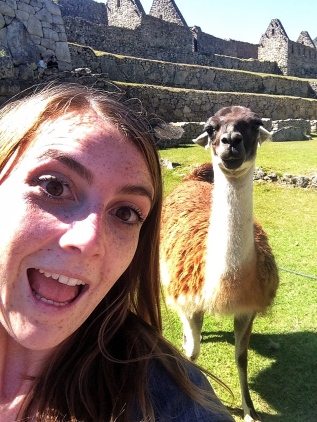 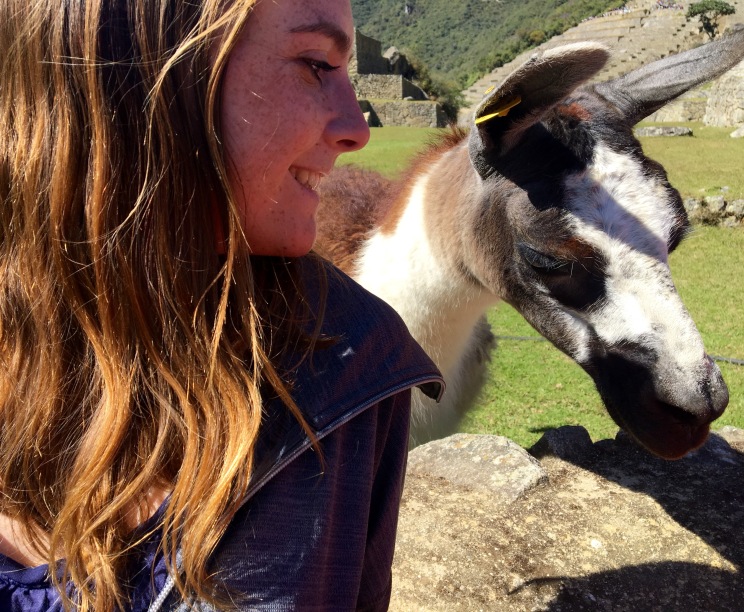