Cuba had been on our travel list for ages; we’d come close to booking flights about a year before our round the world trip, but decided to save it for the first stop in a run of ten Spanish speaking countries making up the last four months of our trip. Cuba definitely seemed like an ‘it’ place to go in 2016, with people anxious to visit before changes in the country are accelerated as restrictions and embargoes with America are relaxed. We visited just after the Rolling Stones’ Havana gig and Obama’s first ever state visit, and just before Chanel hosted Cuba’s first ever international haute couture fashion show, but still, the iconic images of Cuba as a retro time-capsule were far from fading away.

We’d wondered whether the photo opportunities for vintage American cars, the grand yet crumbling architecture, salsa music in the streets and pensioners puffing away on huge cigars would be few and far between (how often do you actually see a bowler-hatted London banker with his newspaper and umbrella, or a striped-top Parisian with bike and beret?), but no, the images we’d had in our heads were everywhere. From the sparkling 1950s convertible Chevrolets used as taxis, to the fume-spluttering chunkier cars and the beaten up old Soviet Ladas used as collectivos (cheap shared taxis) and Habaneros’ private cars, there were more vintage cars on the road than new. The streets looked like scenes we were used to seeing in black and white photographs, but felt all the more like a genuine trip back in time with the vibrant colours of the cars, buildings and sea shining under the Caribbean sun.

The colonial architecture was everywhere, cigars were everywhere and sol and salsa music truly was coming from every corner; from casa windows, from waiting convertible taxis, from buskers, and from bands in bars. 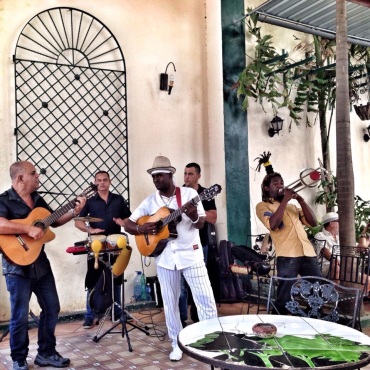 Nowhere to be seen, though, were adverts, brand names or even shop signs. The closest things to adverts were government billboards celebrating Primo de Mayo – labour day – and a huge poster on one side of the cathedral celebrating the Pope’s recent visit. Coverage from the ‘dia de los trabajos’ parade was shown for hours on every TV channel later that evening. Other than the souvenir shops in the heart of Vieja, everyday shops were hard to find, and harder still to identify, as they often had nothing to mark them other than opening hours painted by the door. 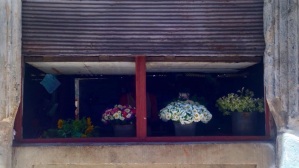 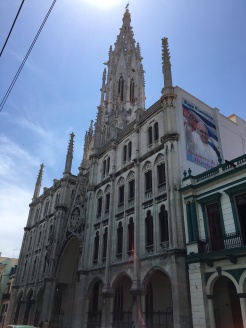 Cuban cuisine has a bad reputation, but we’d read that it’s been improving with the recent increase in tourism and relaxing of strict government controls on the paladores (private restaurants). It seemed, though, that for Habaneros there wasn’t a big eating out culture; families tend to buy food from state-owned shops, and buy whatever is in stock at that time. Nowadays, paladores are allowed more than 12 diners at one time and owners can employ people other than just relatives. We’d wanted to try palador food for ourselves, but eating out was where Cuba’s dual currency quickly showed the limits of a backpacker budget in Havana.

Cuba uses Convertible Pesos (CUC) which are equivalent to US dollars, and Moneda Nacional (CUP) where 1 CUC is 25 CUP. All restaurants charge in CUC, and prices are basically the same as in the US; three meals a day for ten days at that price was going to blow the budget, so we had two alternatives: Eating at our homestay and eating ‘peso food’. Cafeterias, often run from people’s homes with wooden menu boards hung from their shutters, offer fast food charged in MN. We had a pizza for about £0.40 from Havana Pizzas, ate £0.20 cheese sandwiches for lunch, and topped up on caffeine with £0.04 coffees (a 50th of the price in places charging in CUC). It wasn’t the best food we’ve ever had, but definitely a bargain. Breakfasts at our homestay were not as cheap at 4 CUC each, but a much more authentic taste of Cuban cuisine.

Homestays are the best option for accommodation in Cuba. Casas Particulares are run by families who let out rooms in their house, and offer home-cooked breakfasts, and sometimes lunches and dinners too. They were a great way for us to eat authentic Cuban food, see different styles of Cuban homes, and talk about everyday Cuban life with our hosts. There are three ways of booking casas; we booked our Vinales and Trinidad Casas in advance on HostelsClub.com (an easy online booking form) and cubacasas.net (where you take an email address of a casa you like and speak directly with the host). These both worked fine for booking in advance, but once in Cuba mobile data is non-existent and wifi is limited to pay-per-minute services in some of the posher hotels, or street hot spots whereby someone creates a mini network and sells access codes to people gathering round with phones, tablets and laptops. So, the old fashioned method of knocking and asking worked best once we were in Havana. All casas particulares are marked with the same symbol, a kind of upside down blue anchor.

For our final night in Havana we knocked on the door of Casa Senora Cira Castro and were welcomed in by Cira and her daughter Yoselin, shown to our room, given a free plate of pork, rice and beans, and then invited down to the kitchen where plates of Mothers’ Day cake were waiting for us! Over the past few days we’d seen loads of people expertly navigating the busy streets with decorated cakes skilfully balanced on the palm of one hand, which we later realised were all gifts for Mothers’ Day meals on the Sunday.

The free feast at Cira’s casa was totally unexpected; we’d decided to stay in a different casa for our last night in Havana for the better location. The heart of the city is divided into three areas; Vieja, Centro and Vedado. After doing some research online, it was seemed that everyone recommended staying in Vedado, a leafy residential neighbourhood of 1950s houses extending from Hotel Nacional 8km west along the Malecon to FAC (Fabrica de Arte Cubano). What wasn’t clear was that the recommended part of Vedado is the bit right next to Centro. We stayed at the far end by FAC, so got to know those 8km very well.

Being at the far end of Vedado had three benefits, though: The Viazul bus station, where we bought our tickets for Vinales and Trinidad, was just a half hour walk away; FAC was right on our doorstep – inside the crumbling warehouse and surrounding converted storage containers were live bands, art exhibits, pop-up bars and screenings of old MJ concerts; and a few blocks east from our casa on Calle 17 was one of our favourite Havana bars, Casa Madrigal which had live music, delicious tapas and $2 mojitos. 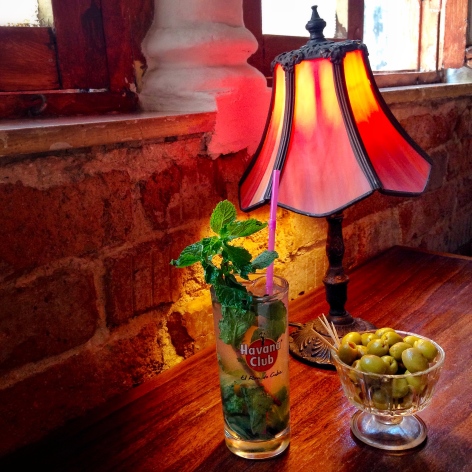 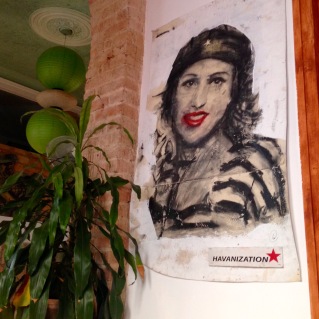 Some 50s convertibles were used for sunset drives along the Malecon, doing loops from Centro down to Vedado and back, but at 25CUC it was beyond our budget. After a couple of days clocking up more than 20kms on foot, we treated ourselves to the budget version; going part of the way in a canary yellow 1950s Plymouth for just 5CUC. 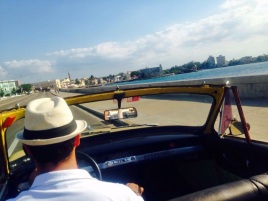 At sunset, the Malecon comes alive with families and couples strolling along the seafront, impromptu guitar playing, and fishermen casting their lines from the rocks. 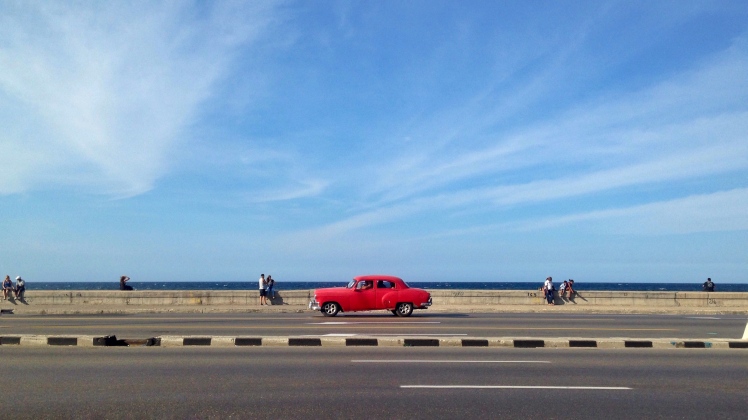 Our casa for our final night was in the middle of Vieja. The colonial buildings of the city’s old town have had the most restoration work, especially the ones in Plaza Vieja where they are positively gleaming. This is mainly thanks to the Habaguanex project which is self-financed by Habanero historian Eusebio Leal Spengler. The project restores Old Havana’s colonial buildings and converts them into museums, hotels, cafes and shops. 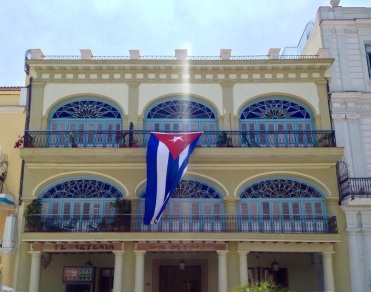 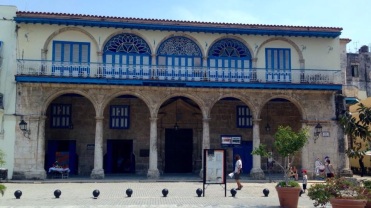 The profits generated by these businesses are put back into restoration of other buildings. As well as Plaza Vieja, Habaguanex restorations focus on Vieja’s three other main squares; Plaza de Armas, Plaza de la Catedral, and Plaza de San Francisco. Plaza de Armas, the oldest square in Havana, was one of our favourites with cafes lining one side and a secondhand book market in the middle.

Hotel Ambos Mundos is one of the Habaguanex project’s restorations, although we didn’t know it at the time; we were there for the roof terrace. Ambos Mundos has views out over the Malecon and across Old Havana’s rooftops. It was also apparently one of Hemingway’s favourite Havana haunts, which explained the crowds. El Floridita, where he drank daquiris, and El Bodeguita del Medio, where he drank mojitos, both looked good but we decided to skip drinks there when we saw the tour bus pulling up outside Floridita, and the crowds outside Bodeguita. Although it doesn’t have a claim to fame, Lluvia de Oro was a lot of fun for live music and mojitos on our last night in Havana. 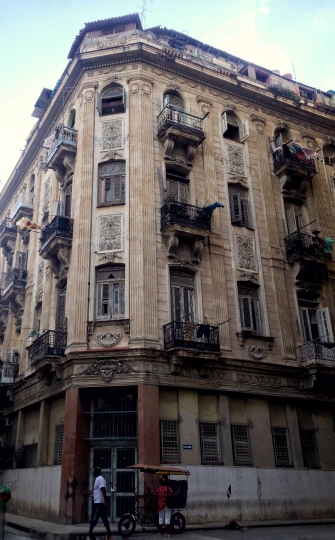 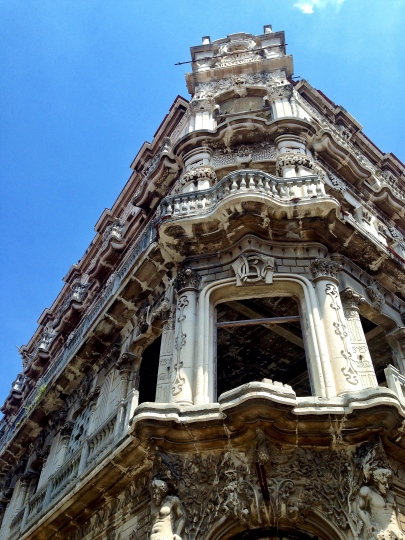 Stepping off the Hemingway trail, Centro – the neighbourhood between Vieja and Vedado – was much less crowded, much grungier, but just as photogenic. The buildings are more weathered, the paint is peeling or sometimes embellished with street art, laundry hangs from balconies, and men sit around tables in doorways to play dominoes. 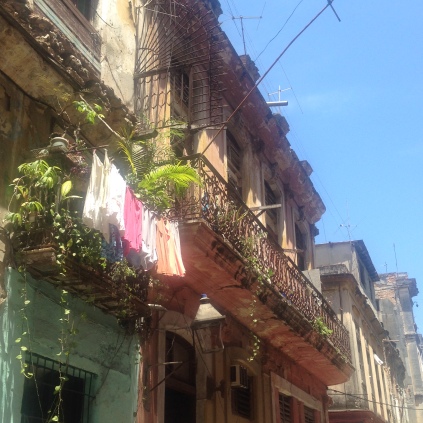 Centro is also home to La Guarida, one of our favourite rooftop bars. The restaurant was beyond our budget, but after entering through the high-ceilinged hallway of what looked like an abandoned building, climbed the ornate, crumbling stone staircase, we bought two drinks from the bar and continued up the iron spiral staircase, where we were rewarded with 360 degree views of Havana, the Malecon lit up at sunset and music drifting over the rooftops from all directions. 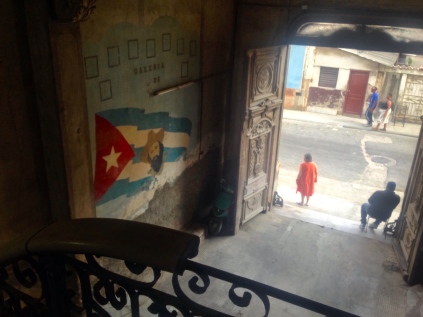 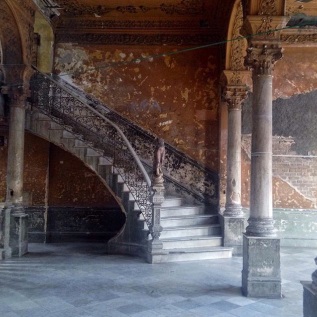 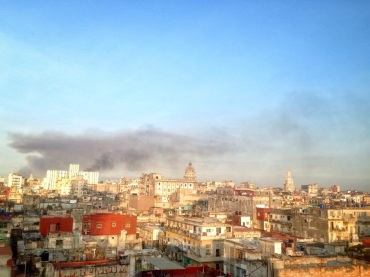