Arriving into Mumbai by train means you’ve straight away ticked one thing off the sight-seeing list as you’re greeted by the hugely impressive Chhatrapati Shivaji Terminus (CST) station building. Or at least it would, if your train doesn’t terminate out in the suburbs as ours did. We were instead greeted by the horrific Mumbai traffic. Still an defining feature of Mumbai life, but far less pretty. 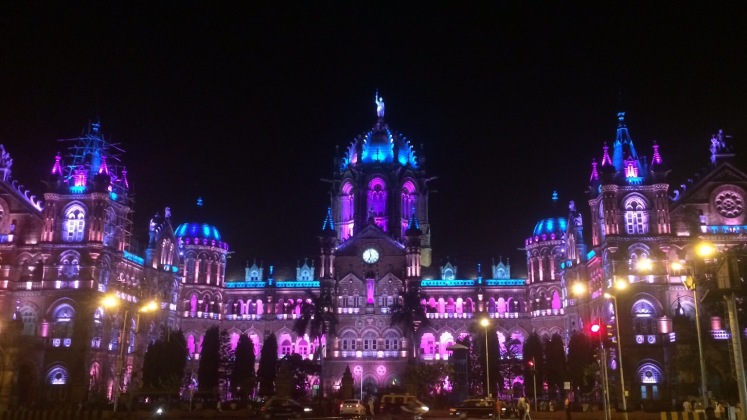 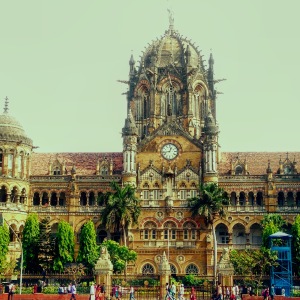 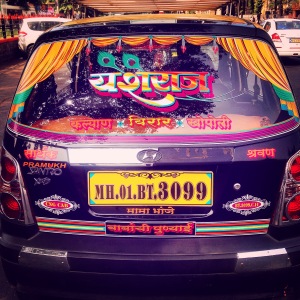 24 miles of gridlocked traffic into the centre allowed for a 2 hour catch up with our friend, and Mumbai host, Mihir and a run-down of key Mumbai-Delhi contrasts. Apparently, while Delhiites have a reputation for taking themselves very seriously, pretty much anything goes in Mumbai. Just as well; we’d arrived from a week on the beach in Goa, so our creased clothes and sandy flip-flops were going to have to do for our first taste of Mumbai nightlife.

We stayed in Matunga, so nights out always began by heading south on the flyovers into Colaba, Churchgate and Lower Parel. 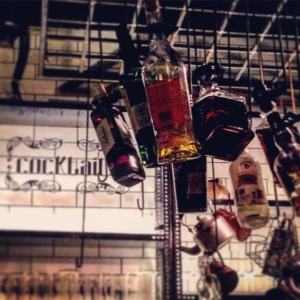 Todi Mill in Lower Parel is a kind of one-stop-shop for brunch, coffee and cake, dinner, drinks and dancing. Social is a great place for all of these but we arrived in time for just the drinking and dancing. They’re famous for their LLIITs – Longest Long Island Iced Teas, served in foot-long test tubes. Not to be outdone, Blue Frog, styled like a giant speaker, serves its cocktails in sports bottles. These proved very popular as souvenirs from the night, less popular the next day when a morning gulp of water had a pretty funky watermelon aftertaste.

Having both just read the India backpacker classic, Shantaram, a visit to Leopold’s was inevitable. Aside from a favourite haunt in the 80s for Linbaba and his gang, the restaurant has other claims to fame; established in 1871 it’s supposedly one of Mumbai’s oldest restaurants, and still shows its scars from the 2008 terrorist attacks with bullet holes in the back wall.

The food at Leopold’s was ok but nothing special. Some pretty special food was waiting just around the corner at Bademiya: street food done Afghan-style. One evening we had a reunion here with some university friends and had a feast of freshly grilled kebabs, curries and tikka rolls from the street stalls. Shahil and Shruti picked us up in their open-sided Jeep which was pretty cool but also strategic; the flat bonnet of the Jeep doubled up as our picnic table! 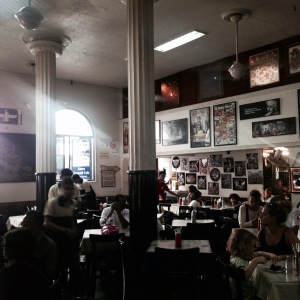 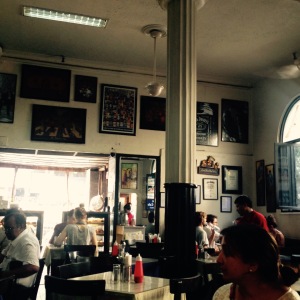 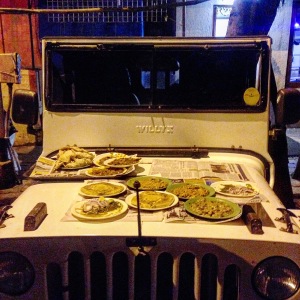 We all met up another night in Bandra, a hipsterish neighbourhood just north of the peninsular. We were coming up from Colaba and clearly hadn’t learnt a thing from our arrival journey, as we left around rush hour and spent another 2 hours in the car. It’s definitely a neighbourhood worth seeing, though. We ate at Bonobo, an open-air second floor restaurant accessed by a lift hidden away between two market stalls, and followed that with dessert on Carter Street where every shop sells either cheesecake, waffles, fro-yo, ice creams or brownies.

Mumbaikers have some varied options for after the bars and clubs close. On one hand, you can cruise down Marine Drive to eat kulfi and faloodah (why on earth you would want noodles on ice cream is beyond us, but hey) on picnic rugs at Chowpatty beach, on the other hand, you can pick up bootlegged after-party supplies down under a flyover. We tried both. 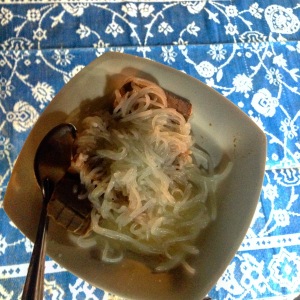 Seeing Timian standing with Mihir, the beer guy immediately doubled his prices, thinking he had an unsuspecting tourist. Thanks to our friends finding it hilarious to only teach us Maharati good for a bar-room brawl, Timian took the opportunity to try out his new phrases… Mihir was ready to leg it, but as Timian could hide neither his accent nor massive grin, the guy was in disbelief that those words had come from a ‘Britisher’, so just smiled and, crucially, lowered the price.

After staying with Mihir, we treated ourselves to two nights at the Taj Mahal Palace in Colaba. Everything about it was worth the small mountain of Rupees we parted with; the beautiful pool, giant comfy bed, smorgasbord of breakfast options and amazing view from our room down onto the Gateway of India. The Taj is also home to Mumbai’s first licensed bar, The Harbour Bar, where we had a few nice cocktails. Well, Rebecca had nice cocktails. Timian had a paan flavoured cocktail which tastes… exactly as you’d expect a drink flavoured with chewing tobacco to taste… 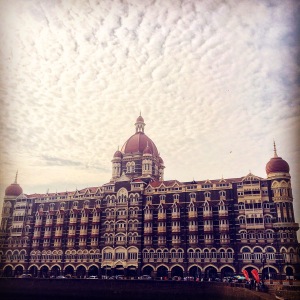 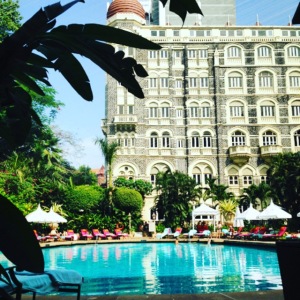 Paan aside, Harbour Bar is more about the drinks than the view. Further along the same road, Bayview has the best view out over the harbour, and is a lot cheaper than the Taj! From the corner table on the rooftop we enjoyed our first fryums and a great view of a wedding starting on a pier jutting out into the harbour.

As well as the Gateway of India and boats to Elephanta Island, the Taj is also perfectly placed for some Colaba street shopping. Alongside the usual line-up of sunglasses, watches and jewellery there are several vintage stalls that look more like the desks of Victorian gentlemen; pocket watches, tobacco tins, miniature telescopes and paper weights. 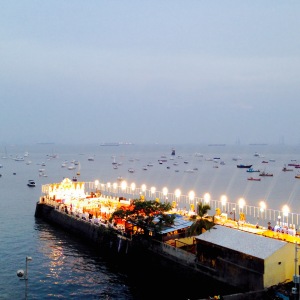 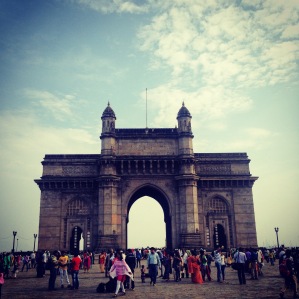 Further north, on the western side of the peninsular, we visited the Haji Ali Mosque. Known as the floating mosque, we had high hopes for some awesome sunset pictures, but made one crucial error. We visited at low tide so, yes the mosque appeared to be floating, but, sadly, floating on the sea of litter washed up onto the rocks, rather than on the Arabian Sea. The mosque is reached by a causeway joining it to the mainland, so to visit the shrine inside you have to go at low tide. But high tide shows it off at its best for photographs. 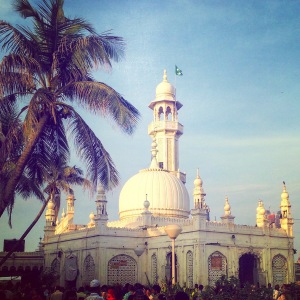 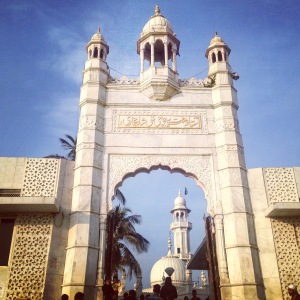 Mumbai is simultaneously home to the world’s most expensive house and Asia’s largest slum, Dharavi.

We’d been debating whether or not to visit Dharavi. Is it insensitive, voyeuristic? Doesn’t it just interfere with, already difficult, daily life? Reading up on the slum we found out that it contributes $665 million to Mumbai’s economy. Not rupees, that’s US dollars. We weren’t expecting that at all and came to the conclusion that there was clearly a lot to learn about Dharavi, so decided to book a tour.

Like any other neighbourhood, there are no rules as to who can and can’t go there, you can of course just turn up and walk around. We decided on a tour for a couple of reasons. Firstly, we would have no clue where we were going. Dharavi covers over 500 acres and isn’t mapped out and sign-posted like other parts of the city. Secondly, booking a tour through an NGO operating in the slum, Reality Tours, meant that 80% of the money we spent goes towards improving life for Dharavi inhabitants.

At the start of the tour, stood overlooking the hutment roofs disappear into the distance from Mahim station railway bridge, our guide asked the group what we understood a slum to be. He said that everybody usually has preconceptions that a slum is a poor, dirty, crowded place to live, but the true definition in India is simply ‘property illegally built on government land’, and that whilst it is a very over-crowded area, and parts are much dirtier than the rest of the city, Mumbai’s poorest people sleep on the streets. Dharavi’s residents either own their hut or pay around £20 a month in rent, usually working outside the slum as taxi drivers, teachers, in banks, or other offices.

Parts of the slum did look and smell as you’d expect. We were guided through pitch-black mazes of one-person wide lanes with ribbons of over-hanging electrical wires, and open sewers. But other parts were nothing like we expected. Half of the slum is given over to the businesses that account for its (declared) $665m turnover. We saw huts used as plastic and aluminium recycling factories, as leather tanning factories, textile dying factories, workshops that made the machinery for those factories, pottery kilns where people spend all year making Diwali lamps, then sell the whole lot in the few weeks leading up to the festival, before starting again straight away for next year.

The last thing we expected in Dharavi was delicious smells, but turning one corner that’s exactly what happened as we smelt the freshly baked bread in the bakery. Dharavi bakes and packages puff pastry snacks that are sold all over Mumbai. 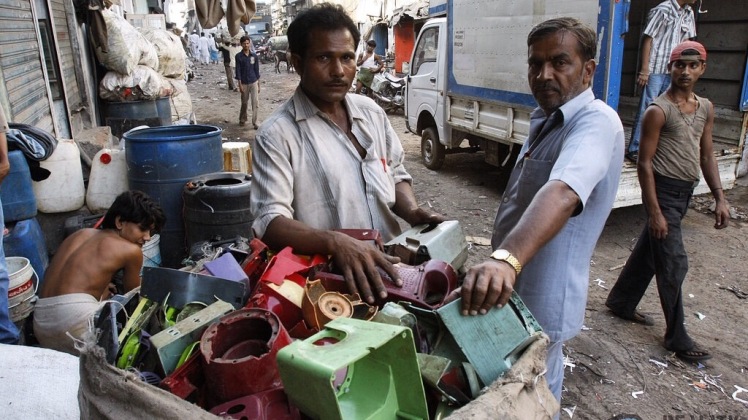 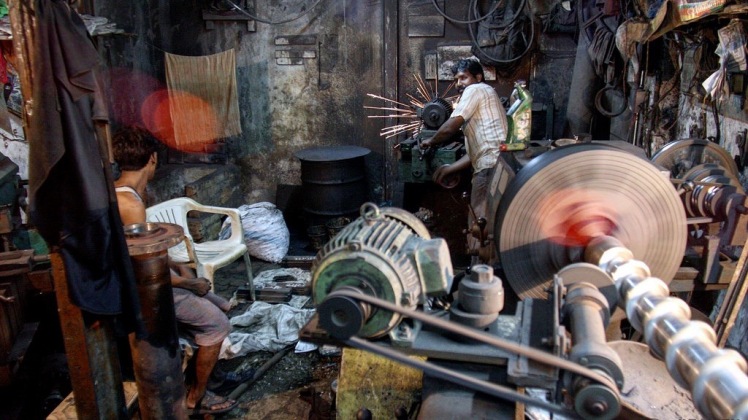 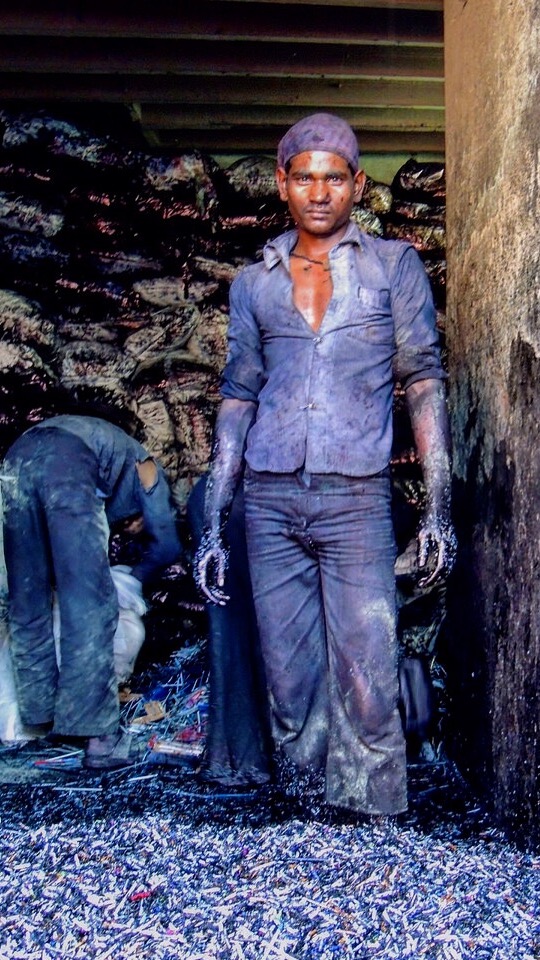 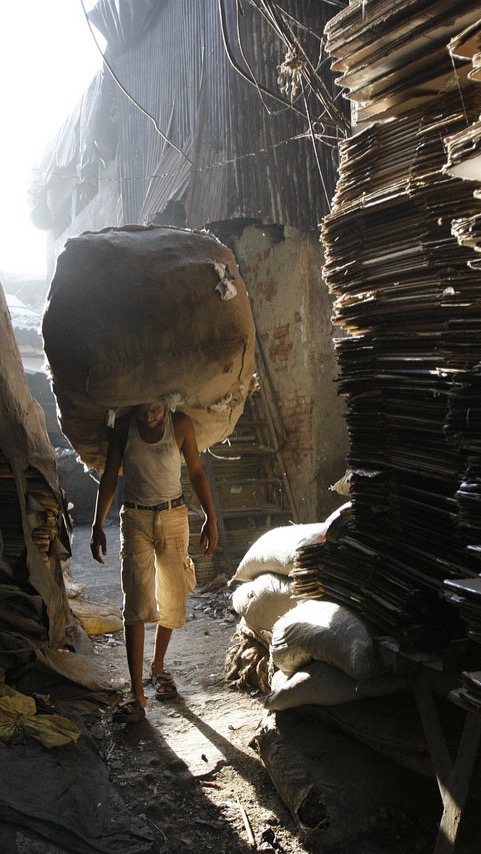 The most striking thing about Dharavi was its people. Of course there is tragic poverty, and life is full of hardship compared with the rest of Mumbai, but the place didn’t at all feel devoid of hope. It has it’s own micro-economy where people earning very, very low wages still have a place to get a wet shave from a street barber, work out in the gym, eat out at a cafe or even put guests up at one of Dharavi’s two hotels. We also got to see the community centre that Reality Tours has established, and watched from the back of a classroom where pupils were taught life skills, computer skills and English.

On our way up to Dharavi we stopped at the ‘Great Wall of Mumbai.’ This stretch of wall runs alongside the train tracks south from Mahim Station and acts as the canvas for anyone with a positive, non-political, non-religious message to share. People are invited to add their mural by the art students who founded The Wall Project, although there isn’t a lot of free space left!

For all that it’s a crazy busy city, we actually found it pretty easy (if slow) to get around, and Mumbaikers really easy to get on with. Yes, the traffic is pretty ridiculous, but it really just demands your time, rather than your nerve or bargaining skills. Autos are banned in south Mumbai so getting around is all done by taxi, and nobody drives on the pavement to avoid cows (Varanasi), or up the wrong side of the road from a roundabout (Delhi).

Leaving Mumbai, we were all set to head up the road to CST and hoping to see (but not board) the famous ‘super dense crush load’ trains. At the last minute, we remembered that the ‘C’ in CST is for Chhatrapati, not Central, and had a mad dash for Mumbai Central Station on the other side of town.

One thought on “Mumbai”