“It’s bigger than Christmas in London”. Durga Puja is the biggest festival in West Bengal, and we were arriving smack-bang in the middle of it, in the state capital and second largest city in India. The excited Kolkatan man in our train compartment, returning home to his family from Varanasi, told us to expect bright lights, packed streets and a city in carnival mode. And that we should spend our whole time ‘pandal-hopping’. No, we didn’t know what that was either.

Arriving at the massive Howrah station, we were met not by crowds of rickshaw touts, but by 1970s New York: queues and queues of retro yellow taxis. Yes, it’s sad to get excited about queues, but they had been pretty few and far between so far in India. These taxis, a metro line and pedestrian-friendly pavements made Kolkata a pretty easy city to get around.

Whilst the taxis are vintage New York; the architecture is vintage London, unsurprising as Kolkata (Calcutta) was the first capital of the British Raj. The Victoria Memorial building wouldn’t look out of place along the banks of the Thames, St Paul’s Cathedral seems transported from the English countryside, and, to complete the picture, there is even a replica Big Ben!

But, we weren’t in Kolkata for the architecture we’d left behind at home. We were here to pandal-hop, apparently.

So what is pandal-hopping?

Pandals turned out to be marquees displaying idols of the goddess Durga defeating a demon. They were everywhere, and came in all shapes and sizes (no, really), from the small, simple designs squeezed into unassuming side streets (or even a public toilet) to others the size of film sets that demanded their own one-way system to control the crowds. 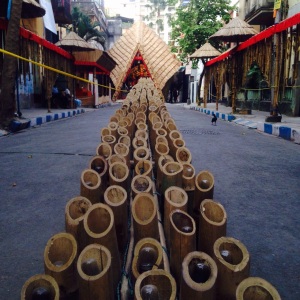 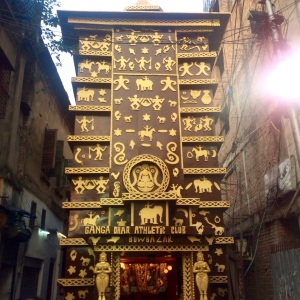 We did look up a few of 2015’s Top Ten Pandal lists (you can even watch round the clock coverage on the Durga Puja TV channel), but with every pocket of the city vying to have the biggest pandal, the most beautiful idol, or the quirkiest theme, you can easily make your own pandal-hopping trail by just picking a direction and exploring, or following the sound of the drums in a Puja procession. We flagged a taxi and, for just 600 rupees (£6), hired it for a day of pandal-hopping around the city.

Some pandals take on a new theme each year. One pandal getting a lot of media attention this year had Durga Puja’s first transgender idol. It was organised by 12 women from the local Pratyay Gender Trust to raise awareness of the transgender community in Kolkata. We barely scratched the surface of the hundreds of pandals across the city, but our favourites were an underwater theme with mermaid-esque Durga, a pandal shaped like a 50-foot Mad Hatter’s hat, and an African safari themed pandal home to over 100 tropical birds. 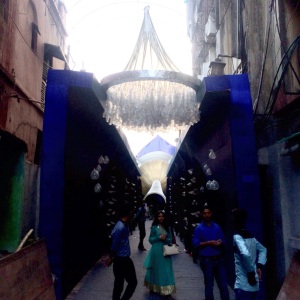 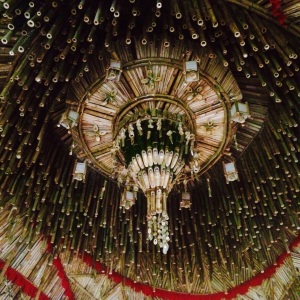 The most impressive by far was in College Square. At first, we thought the pandal must be behind the cathedral we could see across the lake, but, as we got closer, we realised that streams of people were flooding through the cathedral, cameras at the ready. The cathedral was the pandal: huge swathes of material draped and pulled over a gigantic scaffolding frame, with a chandelier most palaces would be proud to own, lighting up a Durga idol on an equally huge scale.

When we weren’t pandal-hopping we were eating. Kolkata is the birthplace of the hot kathi roll. We’d first had these earlier in the trip so knew we had to try the original. Here in Kolkata they’re bigger, greasier, hotter (khatier and at least twice as roll-y) than the small, delicate ones we’d eaten on a roof terrace in Udaipur. The best khati rolls in Kolkata are sold from hole-in-the-wall street food shacks. 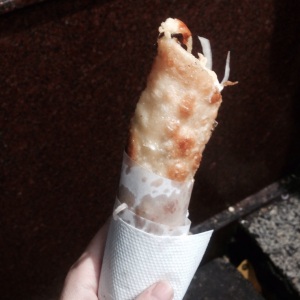 Unlike other parts of north India, the West Bengali menus didn’t have many dishes we’d recognise from the Golden Tandoori back home, meaning the thali in the cosy but casual, living-room environment of Kewpie’s was an easy choice, letting us try a range of new dishes. Dinner at Peter Cat on the restaurant hub Park Street was another reminder of London: a no reservations policy. We joined the crowd of hungry Kolkatans spilling out into the city centre streets and the food was well worth the wait.

We left Kolkata on the final day of Durga Puja pretty much pandaled-out, but in true Indian festival-loving style, the City of Joy was gearing up for another round of pandalmonium in 3 weeks’ time for its second biggest festival, Kali Puja. 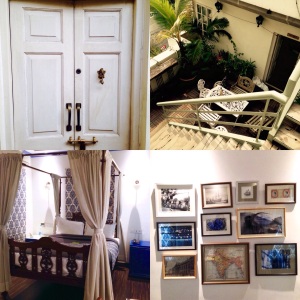