Coming from the chaos, noise and dust of Jaipur, via another night train, Udaipur seemed like a mirage appearing from the Rajasthani desert.

Set around the shores of placid Lake Pichola, Udaipur is the calmer, quieter, effortlessly beautiful sister to the loud, vibrant, colourful charm of Jaipur. Palaces not only surround the lake but seem to float right in the centre. 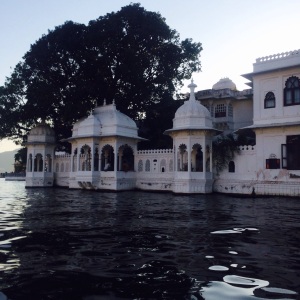 Four nights in Udaipur and we took an auto-rickshaw just once. Udaipur doesn’t have any more pavements than Jaipur does, but the winding lakeside streets in the old town are relatively free from cars and autos, meaning you can walk around while only occasionally diving into porches and shop fronts to dodge scooters, stray dogs, and cows.

Udaipur’s stunning lake back-drop and beautiful old havelis have given it a taste of the limelight as the setting for a few scenes in the James Bond film Octopussy. Limelight that local hostels are keen to latch on to, screening the film for tourists. Daily. We haven’t seen the film, but apparently the director took some artistic license with Indian geography – a scene showing an open window of the Taj Lake Palace looks out on to the Taj Mahal…

We’d read in Lonely Planet that a lot of places in Udaipur get away with mediocre menus, trading on the stunning lake views alone, and that it can be difficult to pick out the gems. It becomes a lot less difficult when you have some stellar tips from friends.

We arrived to discover that an old friend, Mihir (whom we hadn’t seen for five years), was visiting from Mumbai with his girlfriend, Aman, and turned out to be staying at the exact same hotel (what are the chances!?) It was over breakfast with them that we picked up recommendations for Upre and Ambrai on the opposite side of the lake.

Upre is the rooftop bar of Lake Pichola Hotel, where cabana beds are the perfect lazy spot for cocktails as the sunset lights up the Lal Ghat archways on the opposite bank. Ambrai’s outdoor restaurant terrace extends out over the water, giving wraparound views of the Taj Lake Palace, the City Palace and Lal Ghat. With a view like that, we’d have been happy with a bucket of popcorn. We were in fact served delicious smoked chicken curry, our new staple of dhal makhani and paneer tikka, mopped up with freshly-baked roti and naan. 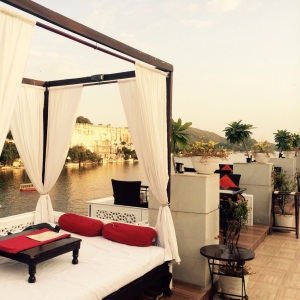 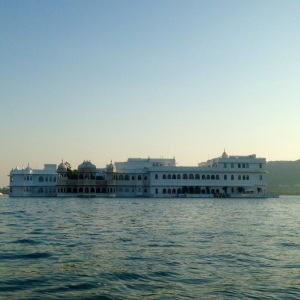 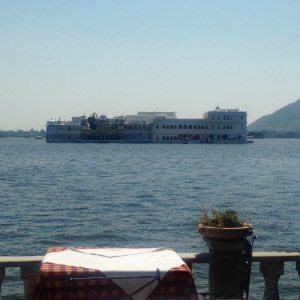 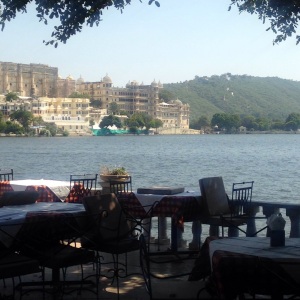 We also have Mihir and Aman to thank for recommending the traditional Rajasthani dance and puppet show at Bagore-ki Haveli. It was in an open air courtyard inside the 18th century mansion, with the audience sitting cross-legged around a performance area on woven mats. We were treated to live music, and dance routines performed in traditional outfits. The costumes were so bright and the dancing so skilful that photos can’t really do it justice. 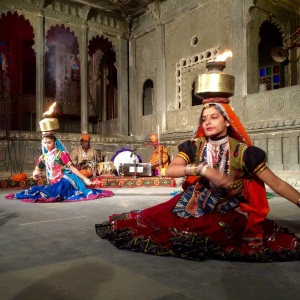 The puppeteer was incredibly talented and got a lot of laughs, but the most impressive part of the show was a dancer who carried an ever-increasing stack of clay pots on her head while attempting a series of trickier and trickier tricks.

Our friend from Bangalore set us up on a sort of blind-friend-date with his Udaipurian friend Pankajakshi. She took us for drinks at Harigarh which was right down by the water’s edge in a quiet, plant-filled garden. It also had the cabana beds without which no bar will now seem complete. She sent us on our way to her friend’s hotel, Madri Haveli, for dinner. Aside from the obligatory stunning rooftop view of the lake, it also had views out from the old city over the rest of Udaipur. It was also a great vantage point to watch some Navratri parties starting on other balconies and rooftops.

Navratri, meaning ‘nine nights’ in Sanskrit, is a nine day (and night) festival dedicated to the Hindu goddess Durga, and Udaipur was just getting into the swing of it while we were there. The sound of drums, fireworks, and small neighbourhood parties could be heard across the city at night and the main market street up to the City Palace was decked out in lanterns, tinsel, garlands and street art.

The centrepiece of Lake Pichola, the Lake Palace, was originally built as a summer retreat for the royal family but today is leased out to the Taj Group as a luxury hotel. Needless to say, this was far beyond our backpacker budget, but we had hoped to at least visit the restaurant.

Sadly, we soon found out that they have a strict guest-only policy for the whole property. But, all was not lost. Thanks to some expert favour-asking by our friend Piyush, the hotel GM agreed to make an exception for us to have dinner there.

The hotel reception is on the shore of the lake, within the gardens of the City Palace. Here we boarded their private boat to arrive at a lantern-clad jetty outside the hotel a few minutes later.
After a tour of the palace (including its lily pond courtyard, home to hundreds of roosting birds), we had cocktails at the water’s edge before another Rajasthani music and dance show in an open-air courtyard. 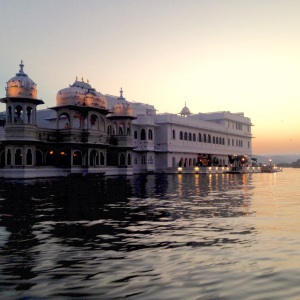 We ate at Neel Kamal, the hotel’s Indian restaurant, and the food was beyond amazing. Aside from delicious starter snacks, meat and veg thalis, rasmalai and kulfi for desert, we had some of the best lamb we’ve ever eaten in the form of Gosht Dekchi Ke Soole. When Rebecca asked (half-jokingly) for the recipe for the lamb dish, they presented us with a hardback recipe book with all of the dishes we’d eaten, the bookmark ready placed on the right page.

It doesn’t take any insider advice to spot the City Palace and its museum. The City Palace is the largest palace in Rajasthan and is still home to the current Maharaja and his family.

Udaipur is proud never to have fallen to Mughal invaders, but this in turn means it was never a rich city, like Jaipur, as its wealth was drained by battle after battle. The city’s history of war was evident in the museum with a large part of it dedicated to galleries of ancient battle paintings (ancient in the sense that the battles took place centuries ago – the fact that the paintings dated from the 1930s took away some of their allure).

From the jetty at the southern end of the City Palace we took a sunset boat trip around the lake, stopping briefly at Jagmandir Island where a couple of over-priced bars and gardens look back to the old city. This boat ride also let us see how the lake is involved in daily Udaipur life, as we passed women washing clothes from the steps of Lal Ghat, and boys daring each other to jump in from surrounding walls. 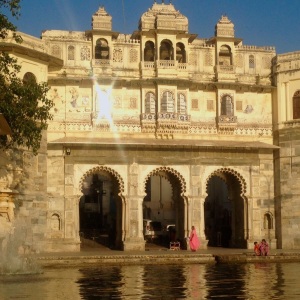 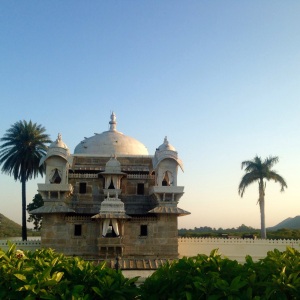 Jumping in the lake did look tempting, but we saved that for the pool of the Shiv Niwas hotel inside the City Palace grounds. Like the Taj Lake Palace, this wasn’t so friendly to a backpacker budget but it was very friendly to those wanting to relax with a few iced Kingfishers by a courtyard pool for the day.

Whilst our own hotel didn’t have a pool, it did have unrivalled views of the Lake Palace from the rooftop restaurant, good food and very friendly staff. It also had an air-conditioned chill out room where we shared some beers and the delight at India’s cricketing defeat of South Africa with hotel manager Harsh and his friends before leaving for our next overnight train to Agra.

We will definitely be returning to Udaipur one day. 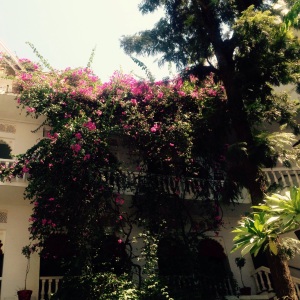