Nothing, but nothing, can prepare you for landing in India for the very first time. Not Lonely Planet, not Trip Advisor, not even starting to read Shantaram on the plane over.

The route up to the himalayan hill station of Shimla starts in Delhi, so we first had Delhi Airport and New Delhi Train Station to contend with. All the guidebooks warn about the opportunistic scams that touts will try on unsuspecting tourists in order to lure them to a new hotel where they will get commission. It was really just a rite of passage that someone attempted a scam with us.

After having driven like a maniac most of the way from the airport, our taxi began to crawl at a snail’s pace and pulled into a small side road. And who should be waiting for us there, in front of some “police” roadblock barriers, but our driver’s mate. His mate who just happens to be hanging around on the street at 2am. With a piece of paper with Rebecca’s name and flight number on it. After officiously showing us his sign, he told us that the road is closed due to Dengue Fever and we should drive to another hotel. Thankfully, we had the route open on Google Maps, so their argument fell apart a bit and our driver reluctantly drove on to our hotel.

To reach Shimla from Delhi, you need to take two trains. First, the Shatabdi Express to Kalka. As an introduction to Indian train travel, the Shatabdi was great. Air-conditioning, comfy seats, power outlets and a free snack of tasty vegetable bhajis made for a comfortable journey.

At Kalka we changed onto the Himalayan Queen Toy Train. Taking this train was one of our main reasons for going to Shimla. This narrow gauge track winds its way through the hillsides and mountain ridges giving stunning views of the Himachali countryside, and the snow-capped Himalayan peaks in the distance. The route crossed over 900 bridges and passed through more than 100 tunnels. We were a bit delayed, but that meant we arrived at Shimla after a beautiful sunset over the hills. 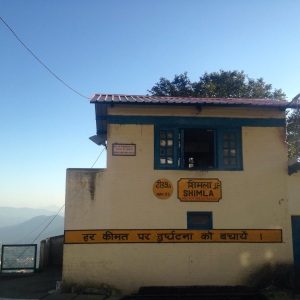 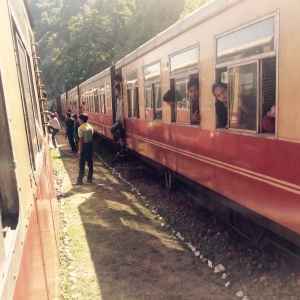 Shimla was the summer capital of the British Raj. Each year, the entire administration moved camp to the Himachali hills to escape the heat of the plains. It was significantly cooler than Delhi with daytime temperatures of 25 degrees, dropping to around 15 degrees at night.

Shimla is home to lots of Raj-era British architecture, but a quaint, quiet cousin of the English countryside it is not. A lot of tourists use Shimla as a launching pad to explore the far north of India or trekking in the Himalayas. We planned to use it as a base to relax and find our feet in India before taking on the 38 degree heat of Rajasthan in Jaipur and Udaipur.

Shimla sits on a mountain ridge, with all the main streets running in parallel along the hillside. The Ridge, and below that Mall Road, run the length of the town, and are the main two thoroughfares. Vehicles are banned on both, letting you escape the madness of Cart Road below, concentrating instead on keeping all food and shiny things out of sight from the prowling macaques. Cart Road and Mall Road are separated by the narrow, zig-zagging alleyways of the Lower Bazaar with hundreds of tiny shops vying for space on the hill-side. At the far eastern end of Mall Road is a 20 storey tower housing a 10 INR passenger lift – a welcome short-cut up the hillside. 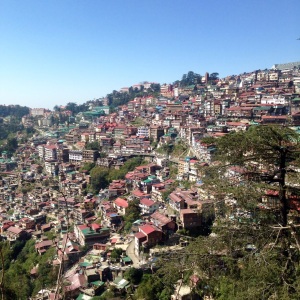 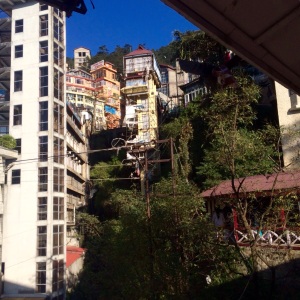 Almost all of Shimla’s hotels are on Mall Road. Apart from ours. We booked relatively last minute and, unknowingly, over a public holiday for Ghandi’s birthday. The town was packed with tourists, and we had to stay in Annandale, the next valley. Annandale was a polo ground in the Raj era but today is home to one hotel, a golf course, and the helipad for Himachal’s chief minister. What looked like an easy walk between Shimla and Annandale on Google Maps, in reality was a ribbon of steep blind corners and sheer drops beset with overly-confident macaques. We took taxis.

Whilst our hotel made great dhal and parathas, and offered free shuttle taxis into Shimla, the staff alternated between indifferent and rude, and we felt quite isolated in Annandale. We’d definitely recommend staying centrally on either The Mall or The Ridge.

The views from Shimla are stunning, but Shimla itself is not much of a looker. We got the sense that buildings had been put up hurriedly to match increasing tourism demands which gives the town quite a haphazard, ramshackle look. There are three signs you see every few metres in Shimla. “No Spitting” and “No Littering” are ignored with ironic exuberance. But one sign is obeyed like gospel: “Horn Please”, painted on the back of all trucks, is completely necessary for the blind corners on the way to Annandale, but horns are also heard constantly up and down Cart Road. In annoyance, warning, territory-marking, and just force of habit.

There are two landmarks that can be seen from most places around Shimla: the 33m-high pink Hanuman statue that sits atop the Jakhoo Temple on the hill east of Shimla, and Christ Church (the oldest surviving church in northern India) at the eastern end of The Ridge. Viceregal Lodge, The Gaiety Theatre and Christ Church were important parts of life in Shimla during the British Raj era and are the main tourist attractions in the town today. 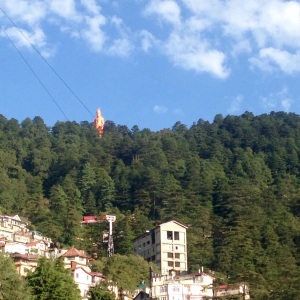 We put our heads round the door of the Gaiety Theatre and saw a few minutes of a Bollywood film screening. We spent a morning at the Viceregal Lodge, relaxing in the gardens (featuring in a few Indian tourist’s holiday snaps, sometimes requested, sometimes not-so-sneakily taken anyway), and took an interesting guided tour of the Lodge itself. When the British government decamped to Shimla there were 840 people living at the Lodge, 800 of whom were staff for just 40 government officials. Today, almost all of the Lodge is open for tourists with the exception of the Ballroom and Dining Hall which are now libraries of the Indian Institute for Advanced Study. The sight of students working away in such a grand, old-fashioned setting reminded us of Cambridge colleges. That, and the polite “Please Keep Off The Grass” signs around the manicured lawns.

A few minutes along the Heritage Walk, from the Viceregal Lodge back towards Scandal Point is the Oberoi Cecil heritage hotel, with a great vantage point for views over the valleys below. It was at this hotel that Mohan Singh Oberoi got his first job as a hotel clerk before going on to found the Oberoi chain of luxury hotels. We stopped here for dinner on our way back to Annandale one evening and had a delicious feast of veg and fresh river sole curries, dhals, freshly-made breads and a very delicious but very unnecessary chocolate ice cream. 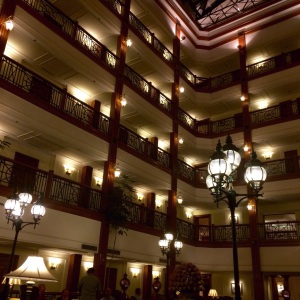 Aside from hotel food, we had a breakfast masala dosa served by an immaculately dressed waiter at the India Coffee House near Scandal Point. Our favourite cafe was Cafe Shimla Times, with its great views, good food, free wifi and cute illustrated wall murals. It was here that we got chatting to Sakshi, a local teacher who’d moved from Delhi to Shimla a year ago. She recommended Shimla’s newest restaurant, Himachali Rasoi (Himachali Kitchen), as the only place in Shimla to get truly authentic Himachali cooking. It was down in the narrow lanes of the bazaar, and was a great recommendation. We sat in a low-ceilinged, wood-panelled loft space on cushions at a low table and were served that day’s thali menu; each day, food is served from a different area of Himachal. We were treated to a Kangri Dham thali and a steamed Sidu bun filled with a dried fruit and cinnamon mix for dessert. 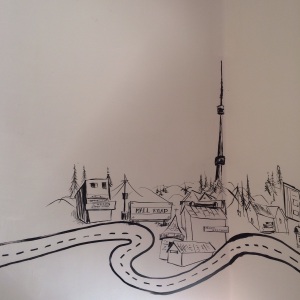 A lot of things about Shimla were a bit of a culture shock at first (especially in stark contrast to the bright lights of Tokyo just a few days before), but the cooler mountain temperatures and vehicle-free streets did make it a good place to get our bearings for two months in India. We left via the Shivalik Express Toy Train. ‘Express’ is a bit of an overstatement for average speeds of 20km/h, but the reclining seats and free meal made it much more comfortable than the Himalayan Queen on the way up. We sat opposite a couple from Chennai who taught us to play Indian-style Rummy, which should be useful for our Diwali party in Bangalore. 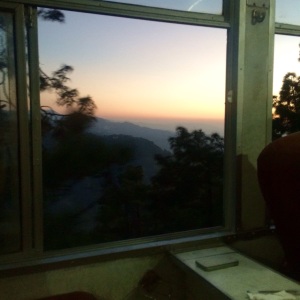